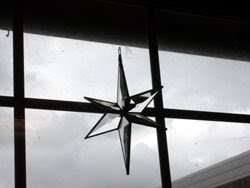 I was so ready to post yesterday, but I completely tired myself out because of something I said here on Monday.
After writing about how much I was ready to 'spring clean' I got nothing done at the house on Monday. This irritated me yesterday morning as I began to work. Since my workload was fairly low, I decided to just take some time to focus on my house instead. It seemed more pressing. So, I spent hours and hours cleaning the kitchen: the oven, microwave, sink, counter tops, baseboards, floor, etc. I also de-cluttered the counter tops. There are two areas in the kitchen that tend to be 'dumping grounds.' One is a large bar and the other is the small counter next to the fridge (just inside the kitchen.) Those two areas were the WORST!! I had to sort through paperwork, put items in different rooms, put crap away in the kitchen, and wade through the trash that had accumulated there. Here's the before and after of each area.
Kitchen Bar before 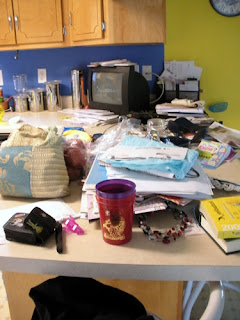 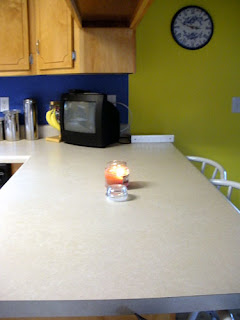 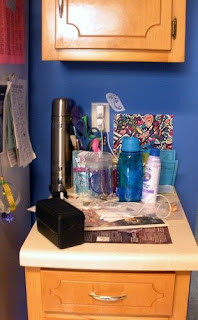 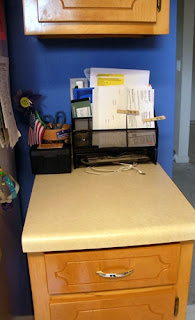 I know, disgusting!! That's why it HAD TO BE DONE.

As soon as the kitchen was complete, I moved on to the living room. The biggest chore there was dusting. There's a reason for that - it's the chore I most avoid as I'm highly allergic to dust. Basic allergy medications have too many side effects for me to rely on them regularly. I've finally found a method that works. It's uncomfortable, but better than suffering with an allergy attack. Basically, I prep my nose with Chloraseptic Allergen Block Gel and a dust mask. Then, to dust, I use Pledge multi surface wipes (these have an allergy blocker built in.) I know this sounds extreme, but I've tried other products that are supposed to trap the dust as well as all of these methods in a variety of combinations. None of these other combinations have ever not resulted in a massive bout of sneezing, watery eyes, and a nap. This method worked. I was overjoyed - I can now dust my house without worrying about my health (at least not once the chore is complete.) So, with the massive dusting, some vacuuming, and a little picking up; the living room was complete. At that point, it was time to start cooking dinner.

Now, I will admit that I did not get to do all off the sorting and organizing I have intended for both of those rooms. In the kitchen, I want to go through all of the cabinets, the pantry, and the fridge thoroughly as well as sort though some of the items in the living room: movies, bookshelves, video games, and various other stacks. Yet, I want to get the basic, surface-cleaning done in each of the other rooms first.

I exhausted myself with these two rooms and fell into bed without getting to blog about my success. I'm glad I got two rooms done as I will not get any done tonight- gotta keep the nieces.

Well, let me stop blabbering and give you some "Wild, Wild Web Wednesday" to finish this post.
Before I let you off the hook, check out what my horoscope said today (keep in mind the cleaning I'm doing):

Your aesthetic senses are heightened right now, and all day long you will see ways to improve the space around you. Every drab room you see will spark your creativity and get your imagination working -- there should be some redecoration projects in your future. Take another look at your bathroom, bedroom, or kitchen and make some plans. Start sketching out your ideas. Pick up a few magazines for additional inspiration. Beautiful changes are coming.

Oh, the picture at the top is the glass star I bought at the Arts & Crafts Festival. Here's the whole window in the kitchen, which reminds me - that window needs to be cleaned too. 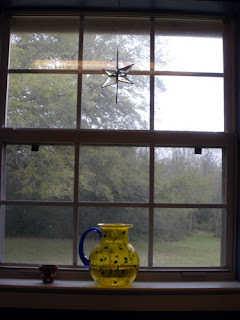