Prepare yourself - this will be a long one since I've been absent a few days.
It's been a rough week for me. I've felt crappy. I've been moody. As such, I thought that maybe I was pregnant. Initial tests have produced a negative result. But the alternative has yet to show its face. Instead, I just feel awful and am moody. In other words, I'm probably just sick. Oh well! The attempts to become pregnant right now are not whole-hearted. If I become 'in the family way' within the next five months or so, it produces problems for me at my Mardi Gras Ball. It's just one of those things. I won't be disappointed either way right now. After the ball - I'll be back to daily crying fits. FUN!!

Moving on, I'm having printer issues. We're out of yellow [or banana or whatever that C-word is the printer companies use for it (not cLEMON), WAIT that's the blue one - yellow is just yellow - I apologize] toner at work. So, I decided to print some stuff I needed for work at home. Of course, the printer here hates me too. It will start to print a document, then it stops, yawns, turns in a circle a few times, and proceeds to nap. When it eventually wakes, it spews out whatever was there when it went to sleep (i.e. NOT the full document.) LOML says he can help me when he gets done working today, but he's not even exactly sure why it's acting that way either. I tried getting closer to it (it's wireless), but that didn't help ANY. It's really upsetting, because it's a new printer that LOML JUST got because I wanted a wireless one with a scanner. This SUX!!

Before I share some Thrifty Thursday links, I want to share my thrifting finds from Saturday's yard sale venture. 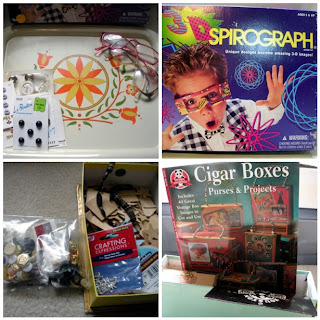 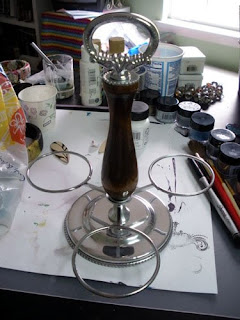 Now for the "Thrifty Thursday" links you've been waiting for:

So, that's if for now. Tune in tomorrow to hear me complain some more. OR, I might surprise you with something positive. You never know!!
Labels: pregnant thrifting thrifty Thursday work
CraftyHope
I’m a jewelry-artist, treasure hunter, & nature-lover that finds joy in the smallest things. I hope to spread that joy and inspiration.