Each month, Sarajo of SJ Designs Jewelry shares an inspiring photo from her husband, Eric. He gives her these photos as a fun jewelry challenge, and she offers them up on her blog for anyone else who wants to participate. It's called the Honey Do List.  I'm running behind on this reveal for January's challenge as I struggled with the simple color scheme of the wintery bird in the snow. I thought I was going to let another of these challenges pass me by. But, after seeing Sarajo's reveal, I was struck with an idea.

Something about the plump shape of the little bird had me wanting to use a wide teardrop that I cut from reclaimed tin. I chose to use the distressed, aged bottom of a vintage tin. From there, I thought I was just going to wire on some beads, but the blank front of the tin was itching for some kind of adornment. 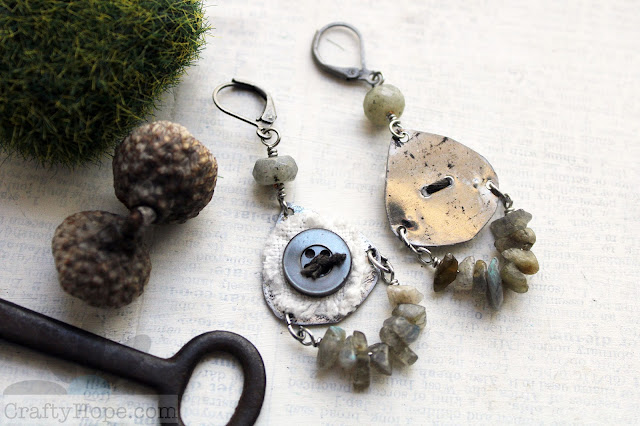 I dipped into my button stash and found two gray beads in similar color and size to attach to the front of the tin drops. But, the gray-on-gray felt stark and didn't have that pop of white that the snow provides in the inspiration. So, I turned to a vintage linen tablecloth that I've been using snippets of in my mixed media work. It was the perfect addition of texture to the tin. Once the fabric and buttons were sewn and tied on with black embroidery floss, I punched holes for beads. 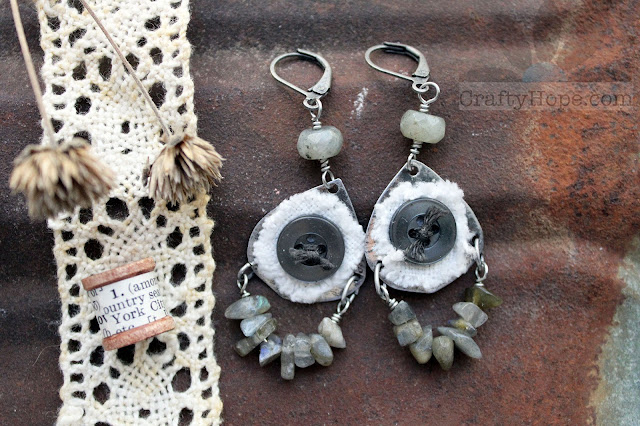 Labradorite seemed to be a perfect choice. A curve of wire with stone chips hangs from the bottom while a faceted rondelle acts as a connector to the lever back ear wires.

I have to confess that once I finished making these earrings, I wore them the whole rest of the day. I kinda love them.

As always, a HUGE thanks to Sarajo and Eric for the inspiration. I wouldn't have come up with these beauties without it. Make sure you head over to January's Honey Do List Reveal at SJ Designs Jewelry to see what other jewelry the photos inspired.