Happy Valentine's Day, y'all! I hope the day and week ahead treats you well. This past week was a doozy for me! Take a peek. 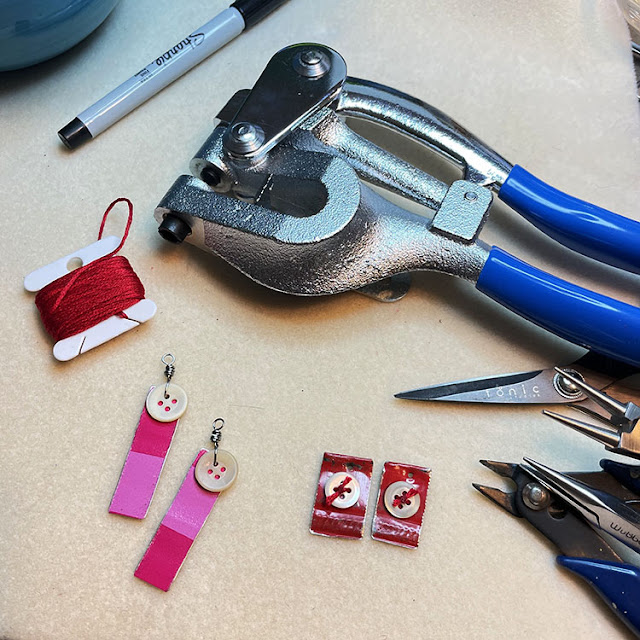 The above is about all I accomplished on Sunday, and that was specifically for my #100DaysOfMakingJewelry for #the100DayProject. My motivation otherwise was NOWHERE to be found. I had all kinds of ideas and things I should have done, but it all felt so taxing. I ended up playing on the Xbox for a while. It wasn't productive by any means, but I let it slide. 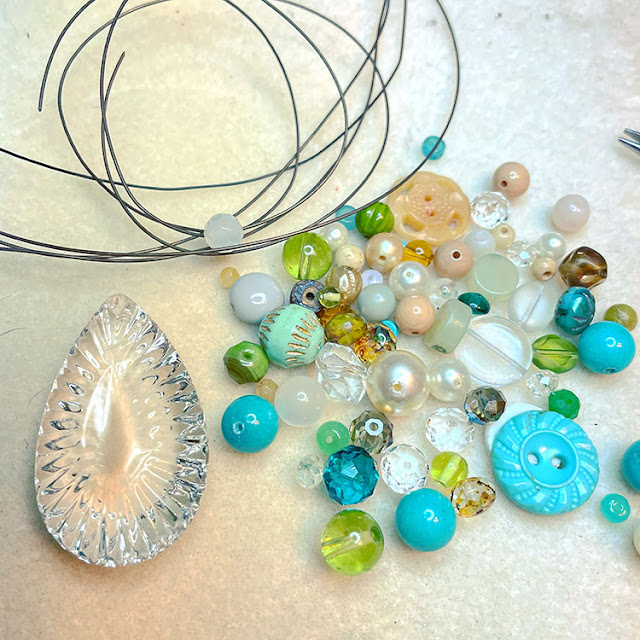 Monday, as usual, was much more productive as I knocked tasks off my list, including working on some jewelry. In fact, I worked with the above materials for several days to get a necklace made. There was a terrible storm that night that had us up at 3am unplugging everything to protect it from a lightning strike.

Tuesday ended up being a warm and beautiful day. But, I didn't have a chance to enjoy it because I stayed so busy! A customer ordered some earrings but then picked out several other items she had found on my blog and Instagram that she wanted. As well, Artemis had another vet appointment as we're still spacing out her vaccines to prevent another bad reaction. 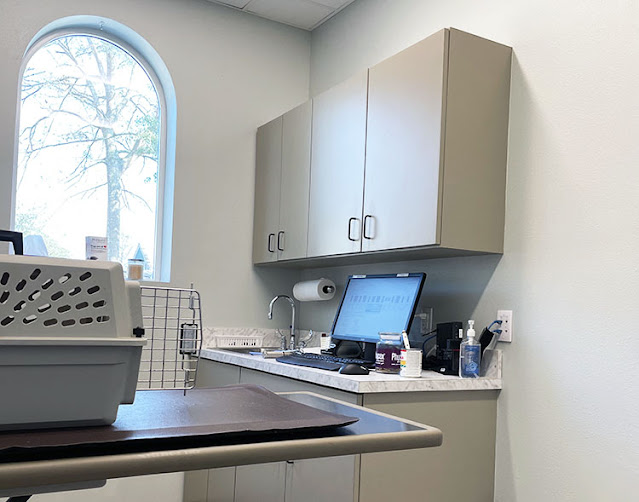 That went pretty quickly and painlessly (for me anyway!) Back at home, our washing machine's drain has continued to back up. Though Tuesday is my laundry day, I couldn't finish the washing without making a bigger mess (more on that in a minute.)

Despite all the crazy, I was able to fit in just a few minutes of art-making. 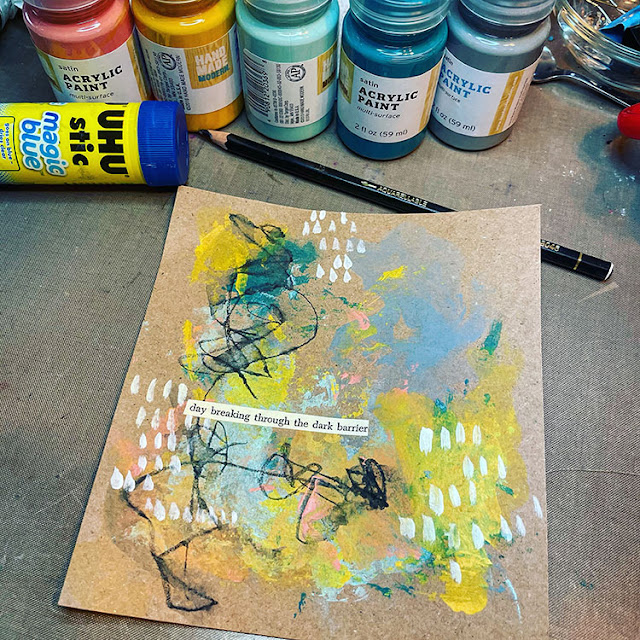 I needed to play with some paint to relax a bit. It definitely helped.

All heck broke loose on Wednesday. As scheduled, the guys came out to pump our septic tank to see if that would help fix the laundry drain issue (it didn't). They left the lid to the septic tank exposed because it needed to be re-mortared (by us) before it could be covered back up. While Pat ran to get the mortar, I went and updated the booth at Southern Antiques and Accents with a few new things. 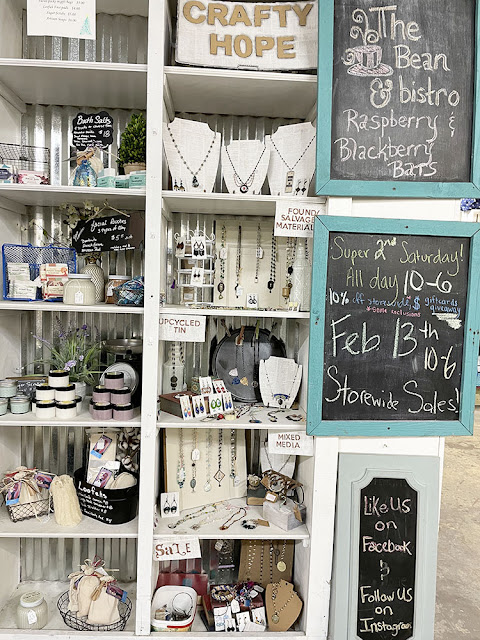 From there, I went to pick up lunch. It was already raining, but this was headed our way. 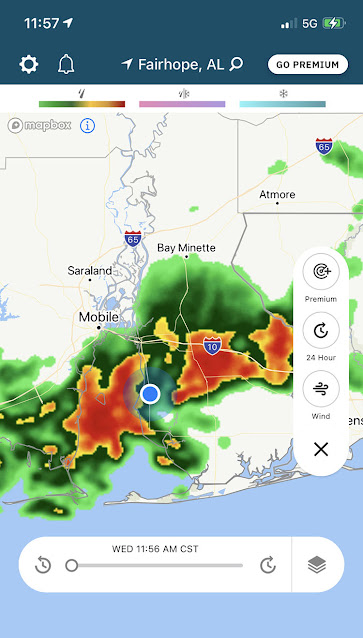 With lunch in hand, I hurried home as lightning struck several spots very close to me as I drove. I arrived home shaken and soaked! As well, the rain prevented Pat from mortaring the septic tank lid, so it was still exposed in the yard. As we sat down to enjoy lunch, we realized that the satellite was out. Further investigation revealed that the cable to the house had been cut when the septic tank was dug up. We were on the phone with the satellite company for 45 minutes just trying to get them to send a technician. They wanted us to restart the receiver and run through all the other troubleshooting. We were both already at our wit's end, I don't think we were very kind. It was an exhausting day.

Since I knew repairmen were headed in to help us on Thursday, I woke with some optimism. It was really foggy but warm enough to sit on the porch and focus on the day ahead. From there, I saw that the jessamine was blooming. 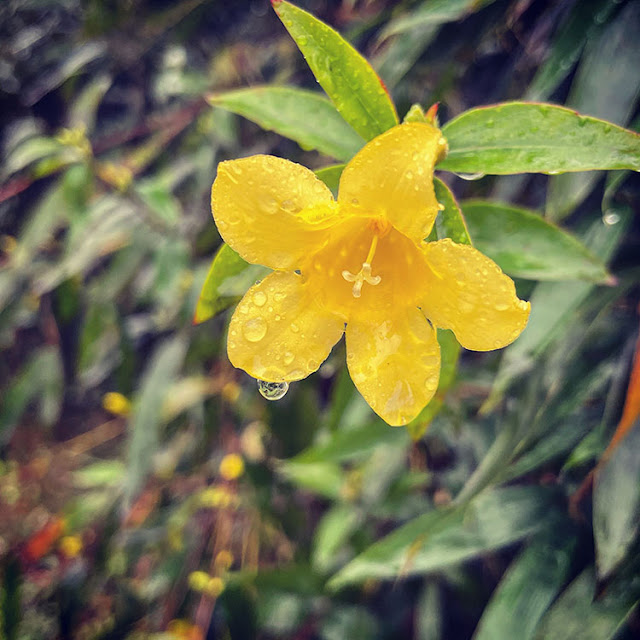 It helped keep me hopeful.

Before long, the reinforcements started rolling in! 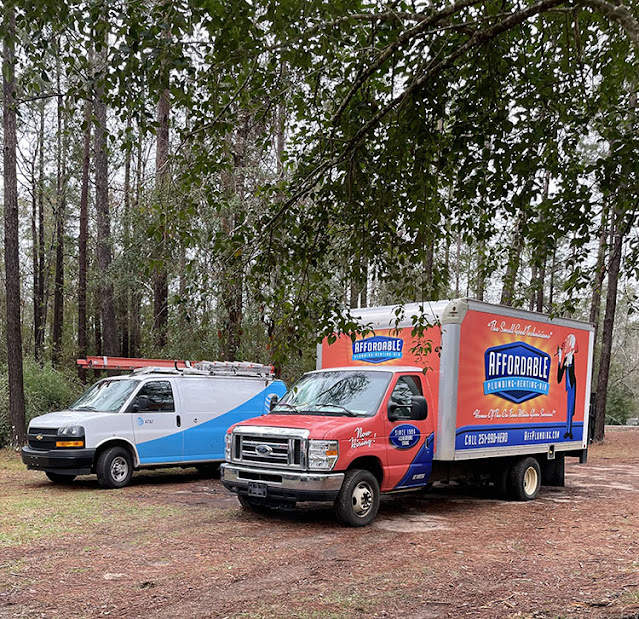 The cable line was re-run and the plumber did his best to fix the washer's drain. However, they'll be back out here on Monday to re-run the line. It'll be an expensive mess, but maybe I'll be able to wash clothes again! While they were both doing their thing, Pat was able to mortar the tank. After lunch, the rain held off long enough for me to help him re-bury it.

I finished the necklace from earlier in the week and started on some earrings. 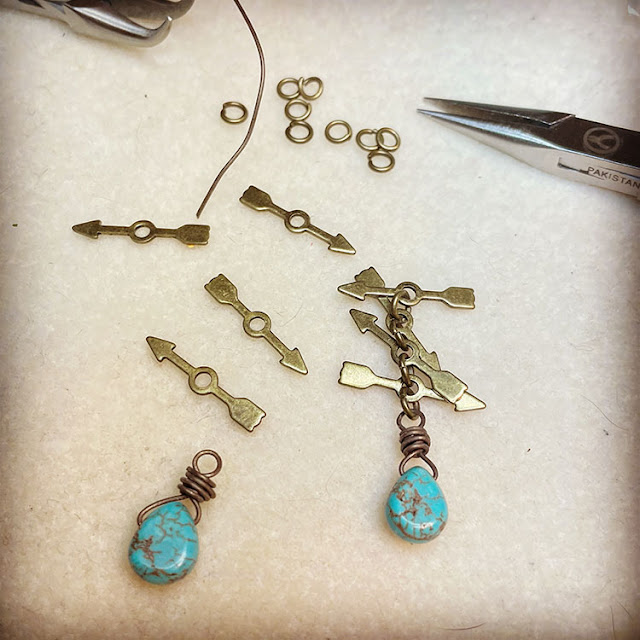 Later in the day, I even did a little art journaling. I really just wanted to throw some paint around but went overboard into ugly. I was just about to walk away from it when I realized I could highlight the beauty in that mess with some black gesso. 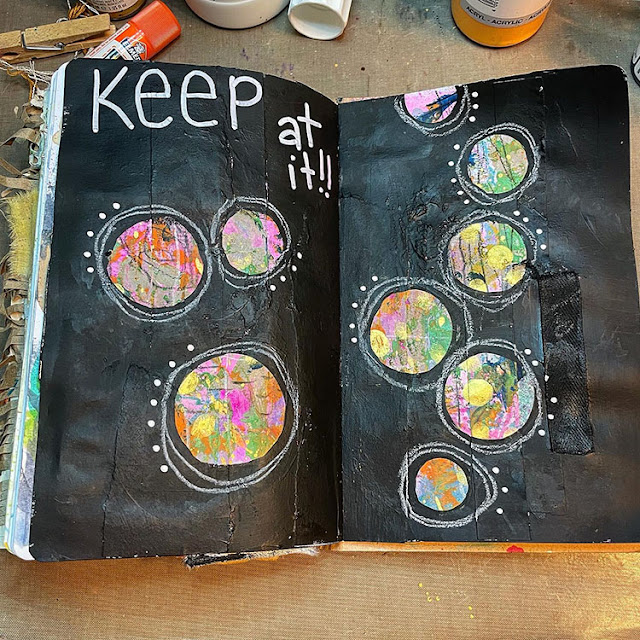 On Friday, I decided to use up some of the eggs the chickens have been laying for us. First, I topped my avocado toast with a couple for breakfast. 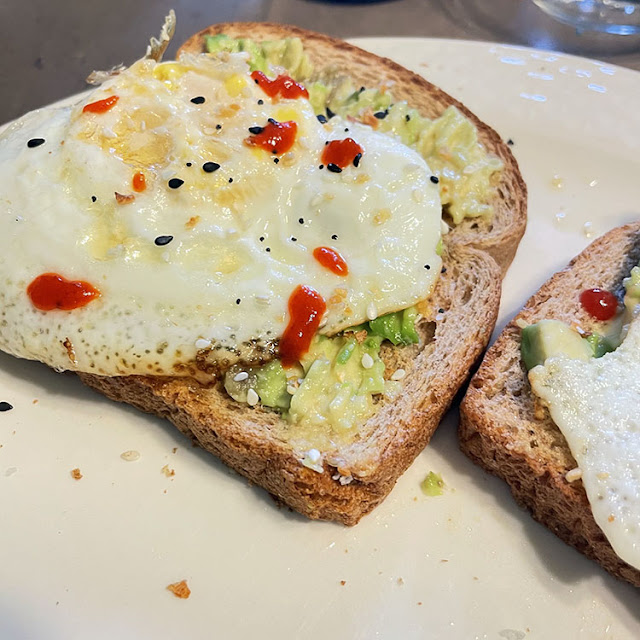 They fueled me for the day ahead and the long list of chores that I tackled first thing. Then, it was on to jewelry-making. 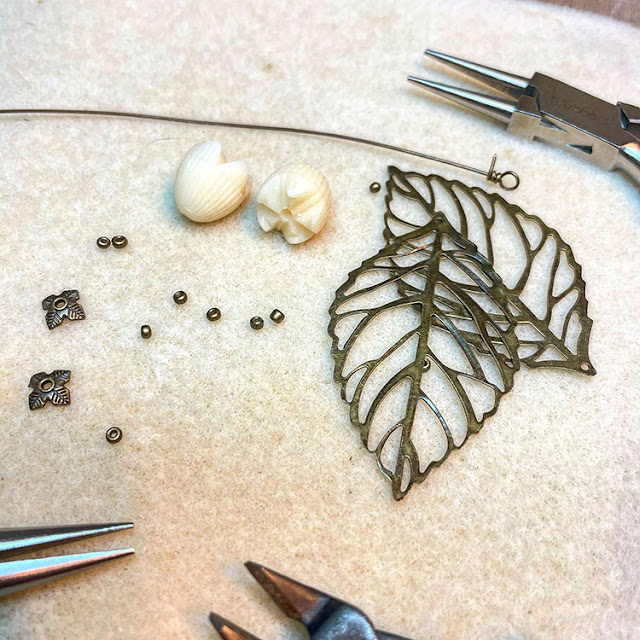 Fresh eggs made their appearance in dinner too! 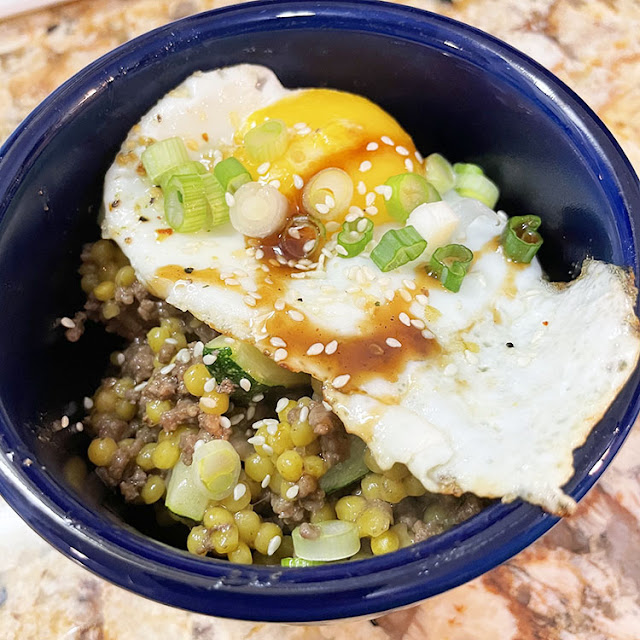 That's a Korean Beef and Couscous Bowl that I kinda made up and will hopefully be sharing the recipe for before too long. It's so stinkin' easy! Oh, and the big news for the week was that we discovered on Friday night that our Building Permit was posted outside. This means that hopefully there will be some movement on Pat's new shop before too long!!

Also, on Friday, I soaked a few pages of a National Geographic magazine with Citra-Solve. It was tough not to mess with it too much, but on Saturday morning, I had some beautiful pages. (You can look up this technique online. There's not much to it.) 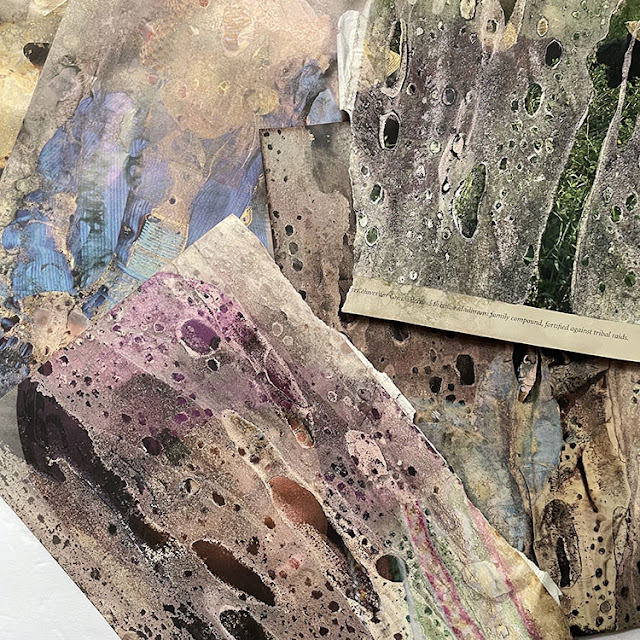 I spent much of Saturday on a particular project that I can't reveal until the end of the month. But, I love it! When I ran out to pick up one supply for it, I also got some Girl Scout Cookies. I couldn't resist! 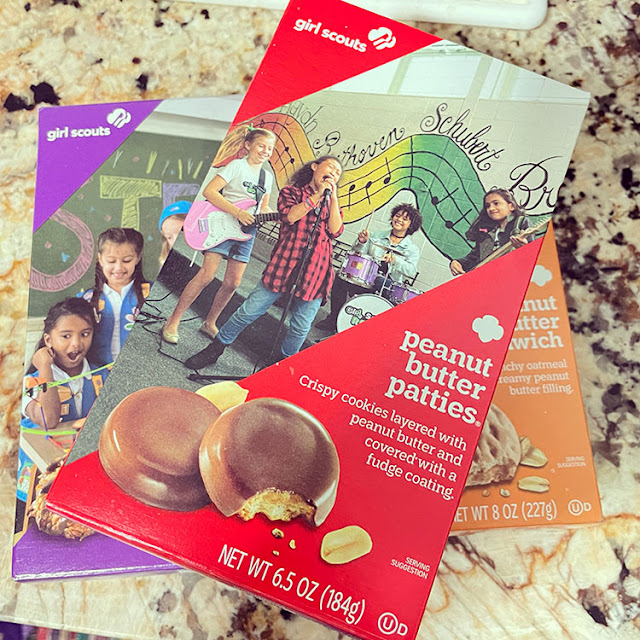 Before I settled in for the evening, I made sure to get started on a new jewelry design. This necklace is moving faster than the other one. 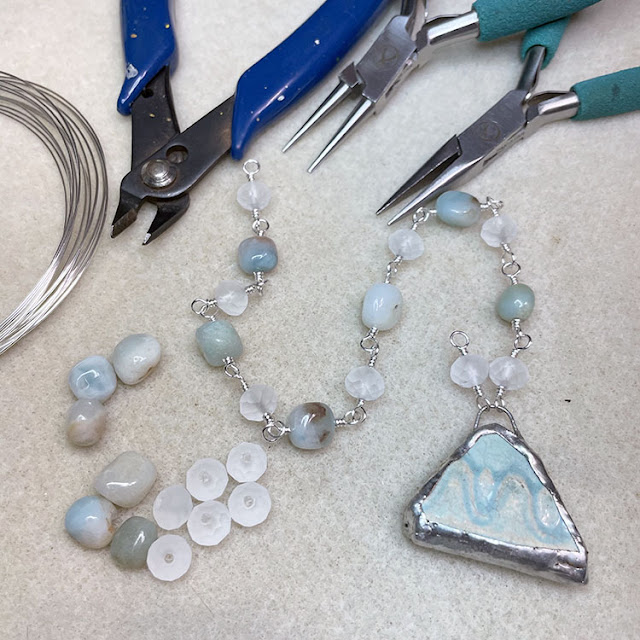 And, that was my week - a wild ride for sure!

Here's a little inspiration for you:

Like I said, this week has been a doozy. I'm looking forward to a better one ahead. Here's hoping yours is full of sunshine and magic!
at February 14, 2021
Email ThisBlogThis!Share to TwitterShare to FacebookShare to Pinterest
Labels: art, art journal, craft desk, food, inspiration, jewelry making, pets, SAA, silverlox, the 100 day project, weather