Each month, Sarajo shares the photo inspiration given to her by her husband, Eric. She calls it the Honey Do List. This month, Eric gave her three photos of stained glass windows from Edinburgh Castle. I absolutely knew that I would be able to draw some inspiration from the windows but put the task aside while I worked on organizing the craft room. When I finally allowed myself to focus on the images, I immediately had an idea. 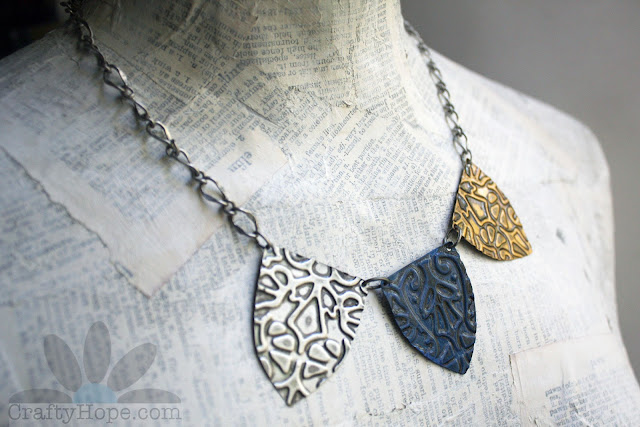 All three of the windows in the photographs included a crest of some sort. I was drawn to the shape of them and started there. 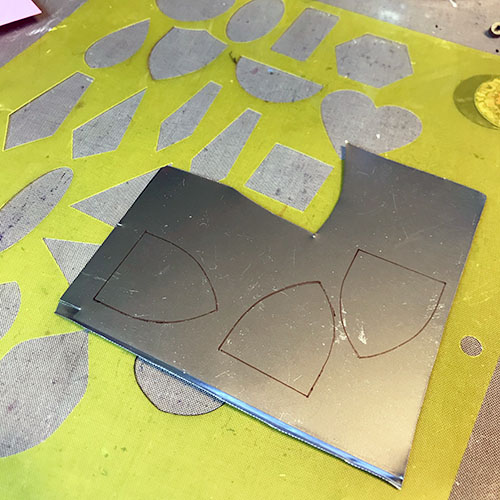 Using a stencil of my own design (cut out on a Cameo Silhouette), I traced the shape onto a flat piece of silvery cookie tin. This was probably the bottom of a tin as it is quite flat.

I used tin snips to cut out the shapes. 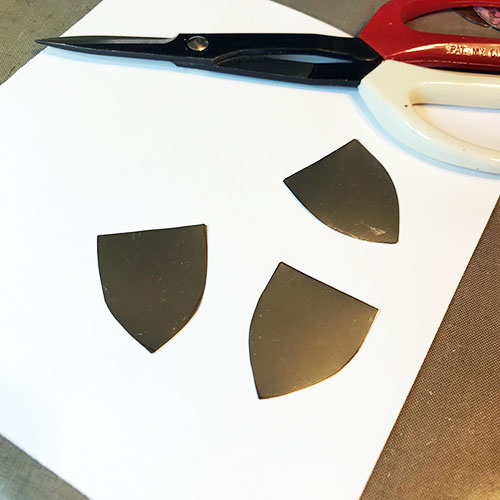 I also snipped off a tiny bit of each corner to tremove the sharp points.

Then, a sanding block was used to soften the edges and remove any burrs. 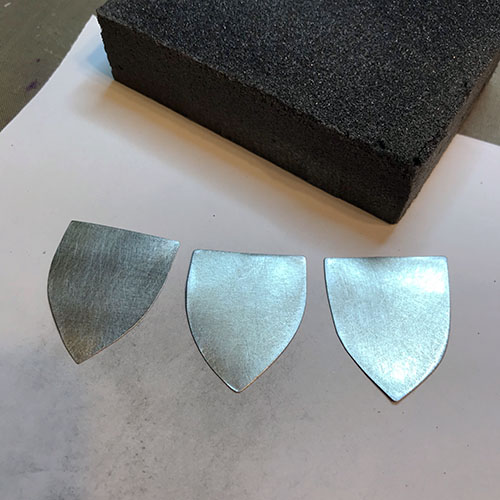 I also went ahead and sanded the flat surfaces (front and back) of the metal to remove some of the coatings on them in case I decided to patina the surfaces. (Spoiler Alert: I did.)

Then, I pulled out my Sizzix Big Kick and a Vintaj Embossing Die to texture the metal. 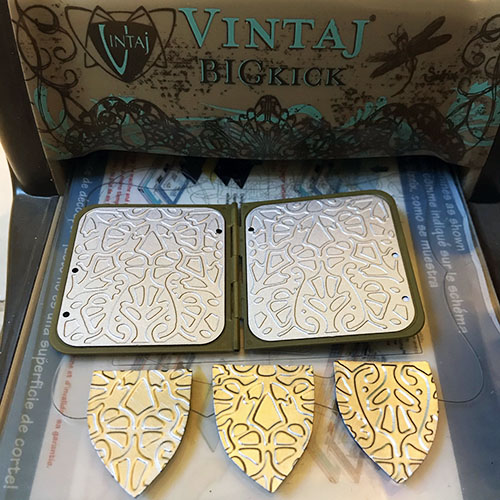 Each piece was embossed individually, and I made a point of not getting the same pattern on each of them as each of the windows in the inspiration photos were also different.

Then, it was time to color the crests with Vintaj Patinas. 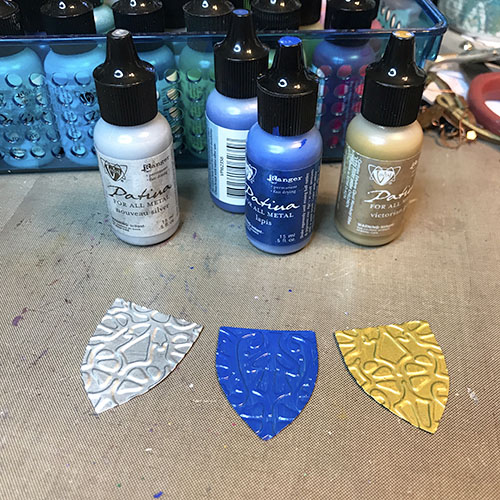 I only used one coat on each piece. The colors were selected based on the dominant color in each of the inspiration photos.

Then, I had a little fun adding more interest to the shapes with a wash of alcohol ink and alcohol blending solution. 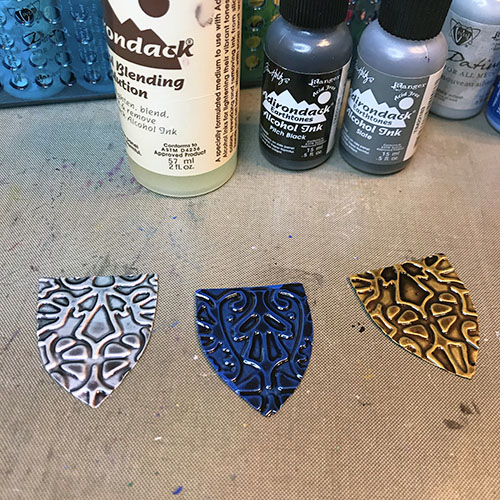 In this case, I used quite a bit of the blending solution and only a drop or two of the ink so that the color was subtle. I could always add more, but it's difficult to remove it once it's on there.

I've just uploaded a video on Using Vintaj Patinas on YouTube if you want to see some of the different ways I like to work with it.
In the video, I used mostly Vintaj metal blanks, but I'm now starting to experiment with it on my blank tin pieces like the ones I used for this necklace.

Once the alcohol ink was dry, a quick coat of sealer was added. 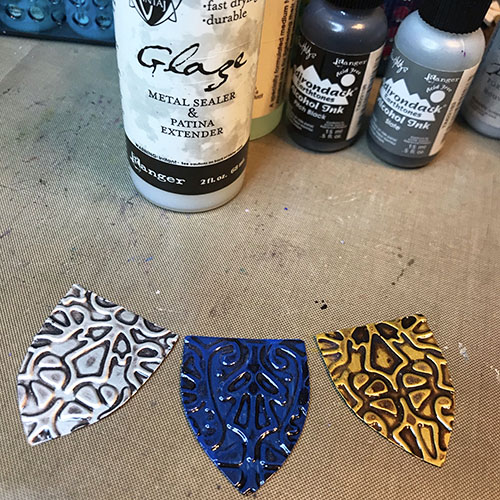 I also allowed that time to dry before I punched holes at the top corners with a metal punch. 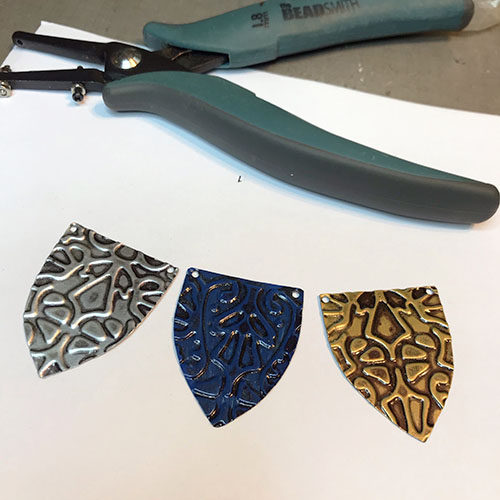 Then, I turned the pieces over to decide what to do about the backs of them. 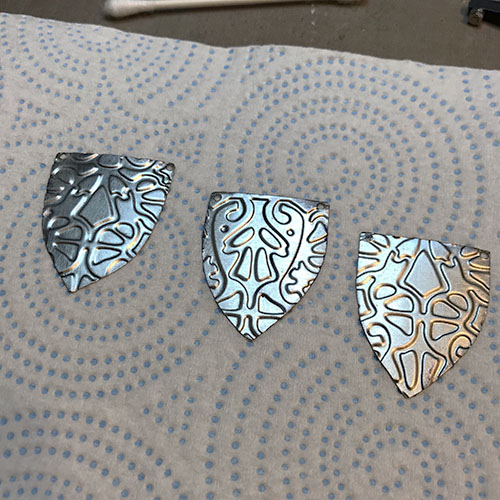 I could have easily left them as they were, but since I HAD sanded them, I decided to slightly darken them with Novacan Black Patina and seal them with Renaissance Wax.

From there; jump rings, chain, and a clasp were added to complete the necklace. 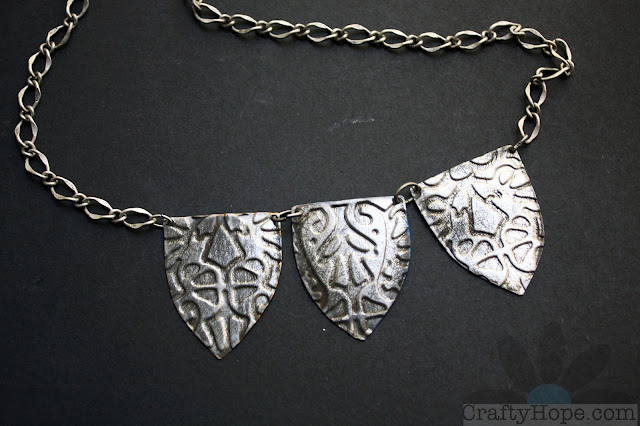 It's difficult to see the darkened patina, but I promise it's there.

I'm super pleased with how quickly this piece came together. I know it looks like a lot of steps, but it really wasn't. 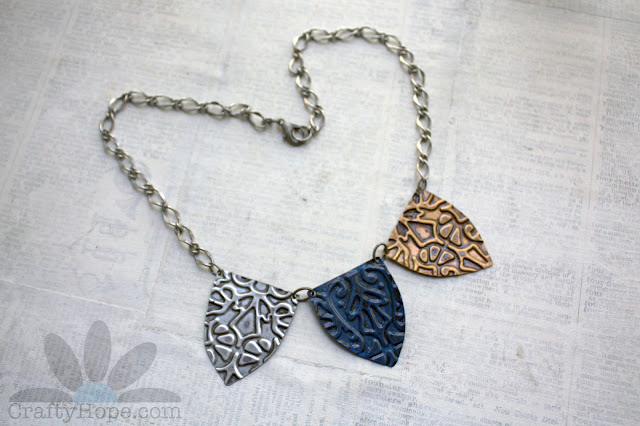 And, I'm excited at how well it represents all three inspiration photos in one piece. 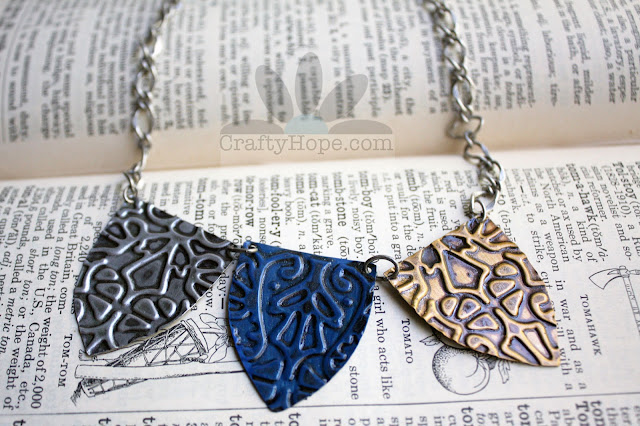 Thanks to Eric and Sarajo for sharing such great inspiration! I'm looking forward to seeing what they have up their sleeve for next month's inspiration.  Now head, over to SJ Designs Jewelry to see what Sarajo made!
Labels: challenge inspiration jewelry making my video reveal tutorial
CraftyHope
I’m a jewelry-artist, treasure hunter, & nature-lover that finds joy in the smallest things. I hope to spread that joy and inspiration.