What a week it's been! I feel like I've accomplished quite a bit, but really, it's only been a couple of big tasks. Take a peek. 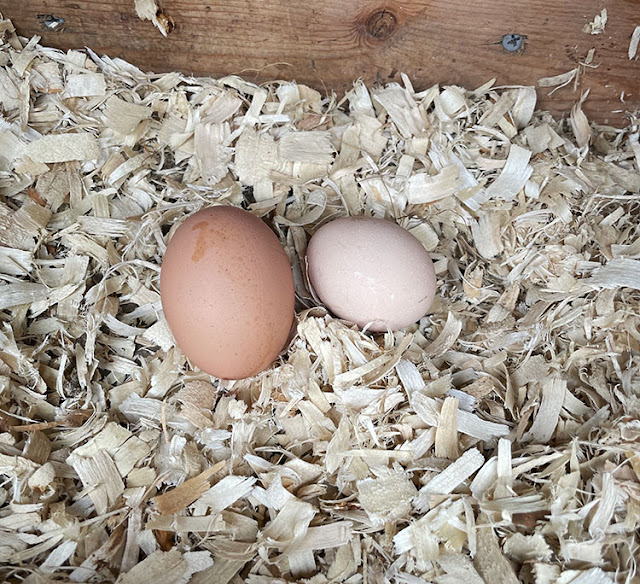 Let me first mention that it's been a big week for "the chicks" too as at least two of them have started laying! On Sunday, I found these two eggs in the nesting boxes. On the left is one of Bertha's and on the right is one of the chicks. woohoo!
After I finished packing up the Bead Soup for my partner, I turned my attention to the big task that took up so much of my week: cleaning and organizing the craft room. 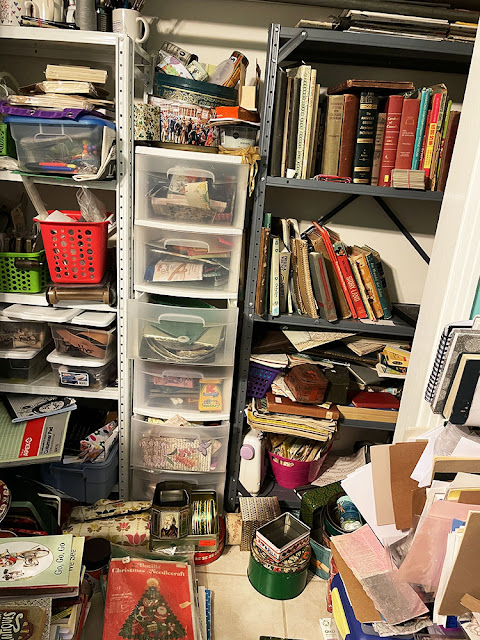 Above was my limit of organizing on Sunday. I had been working on it for hours and finally hit my maximum frustration and had to stop for the day. I had to remind myself that it always gets worse before it gets better (and this wasn't even the worst of it!)

I worked a little more on it on Monday, but the majority of the day was spent with my mom to celebrate her birthday. 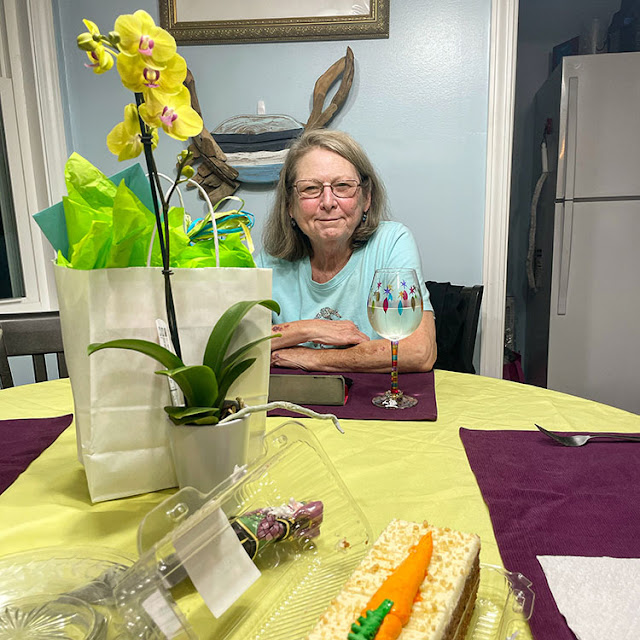 We really didn't do much as we just stayed at her house, but I think she had a good day (after she got done working.)

I busted my butt all day Tuesday to make up for missing out on my errands on Monday. And, there was more craft room sorting. 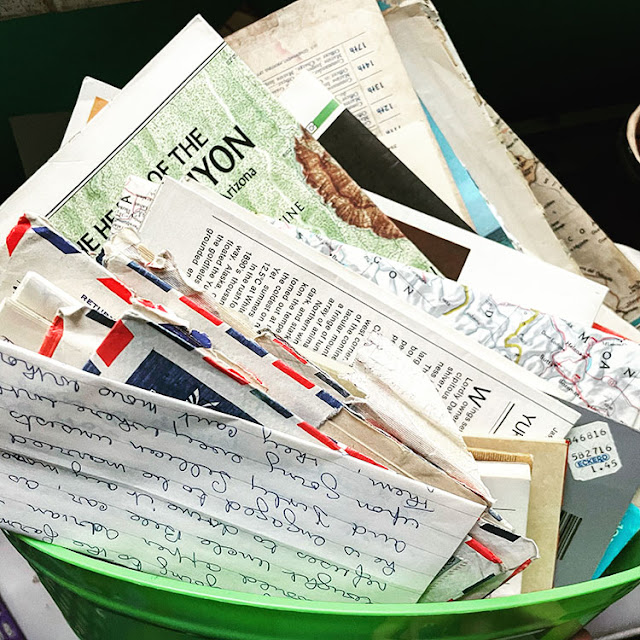 In the afternoon, Artemis had a vet appointment for more vaccines. She'll be going every two weeks to get all of them in since she had such a bad reaction to getting them all at once last time. 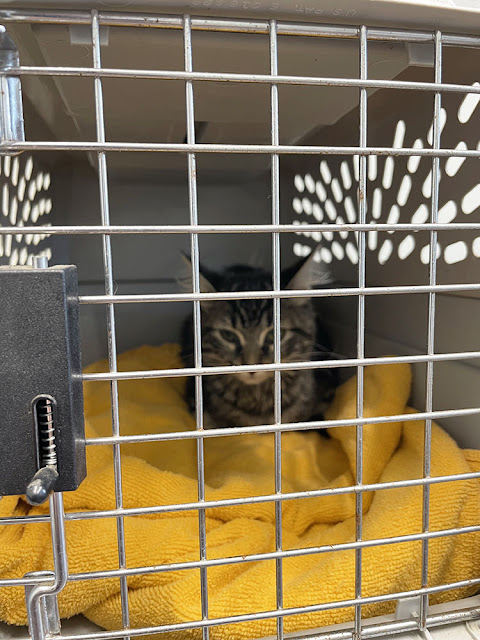 Later, I was feeling a little frantic about all I was trying to accomplish. However, I had a fabulous reminder to just stop and appreciate the beauty around me. 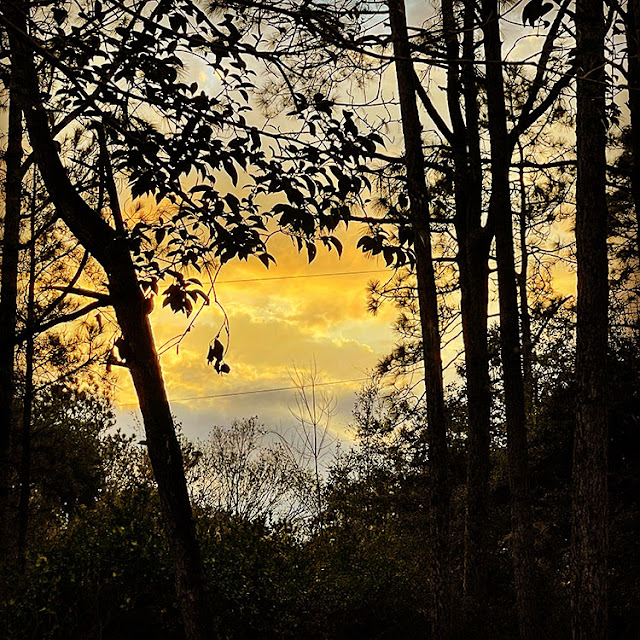 This stopped me in my tracks while taking Zoe out for a few minutes.
Speaking of Zoe, she got some snuggles on Wednesday evening. 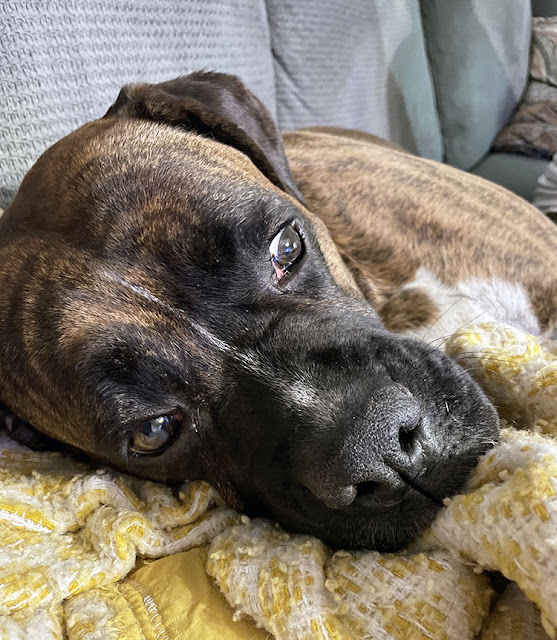 I should also mention (for my own record) that our other cat, Rosalina, had a rough week as she was acting weird: not eating, staring off into space, walking weird. It went on for only a day or two, and she had us plenty worried. But, she's back to herself now.

There was more paper-sorting on Wednesday. 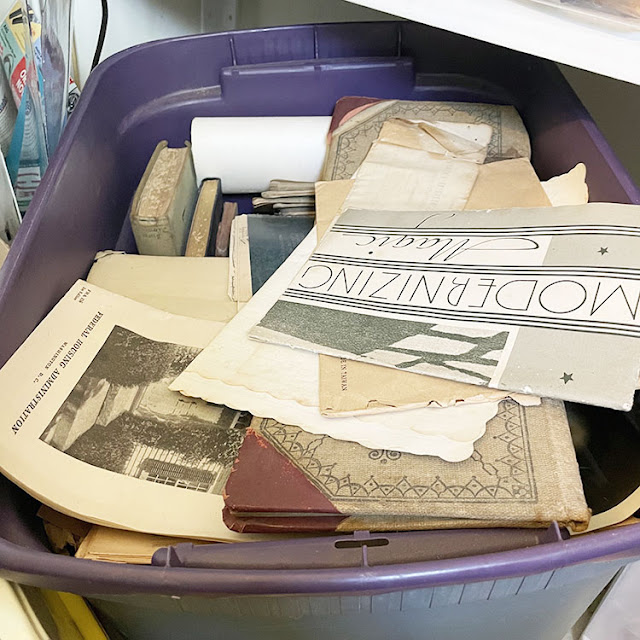 On Thursday, I finished the craft room overhaul! I'll give you a little peek now, but I hope to have some better pictures and maybe even a quick tour for you later. 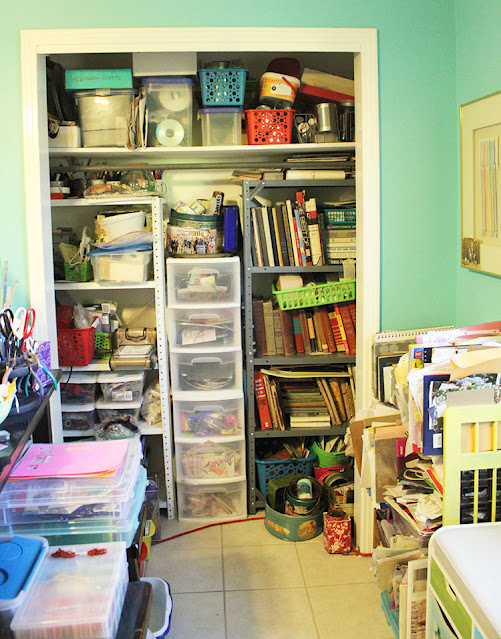 Once that was done, I could focus my attention on the next big undertaking: the 100 Day Project! I mentioned previously that it's starting early this year (TODAY, actually!) at the request of many. I didn't have a problem with the early start but did need to make a decision on what I wanted to do. Because I haven't gotten much jewelry made lately, I knew it needed to be focused in that direction. However, I didn't want anything that felt too strict either. After some thought and research, I decided on #100DaysofMakingJewelry for my project. 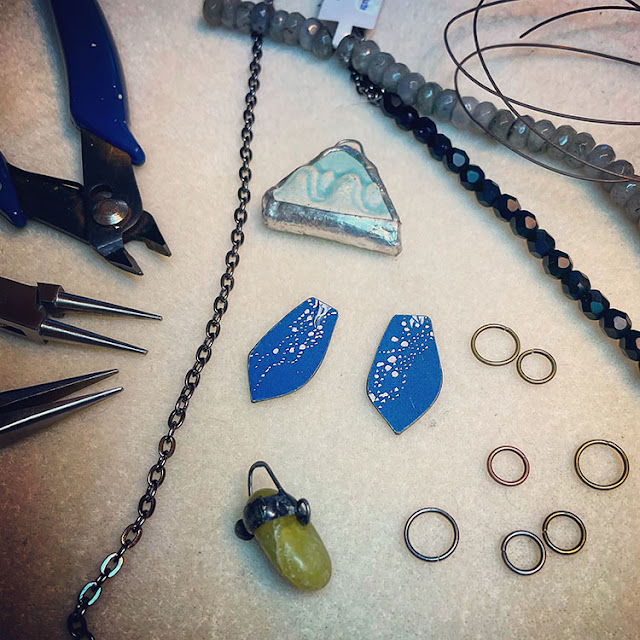 I felt that would give me enough flexibility that I didn't have to have a FINISHED piece each day but could include my process as part of the project. We'll see how it goes.

With a clean craft room and that decision finally made, I dove into a couple of projects. First, there was some earring-making. I'll share the results of that later. Then, I played in my art journal. 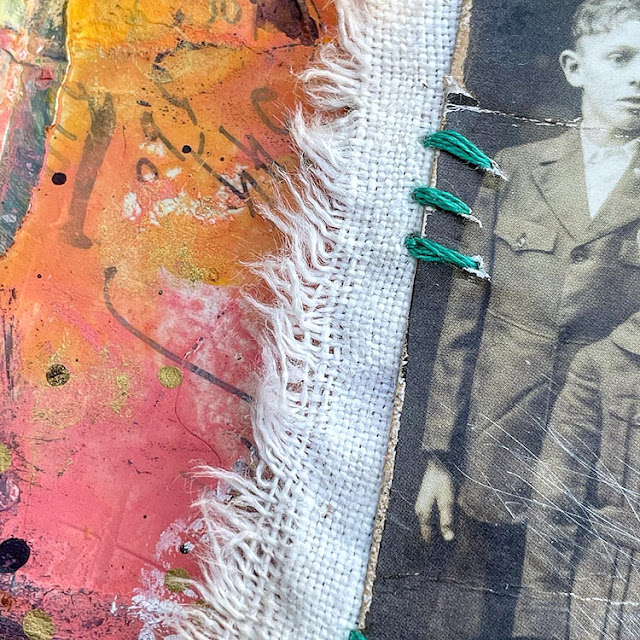 On the spur of the moment, Pat decided to light a fire in the firepit on Friday night. It felt good to sit outside for a while after spending a week so focused on the inside. 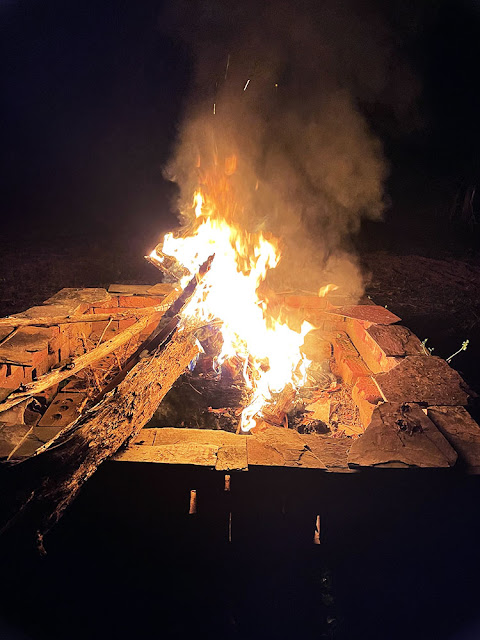 With a basket full of fresh eggs, I made a full breakfast that incorporated them along with some delicious CaraCara oranges. 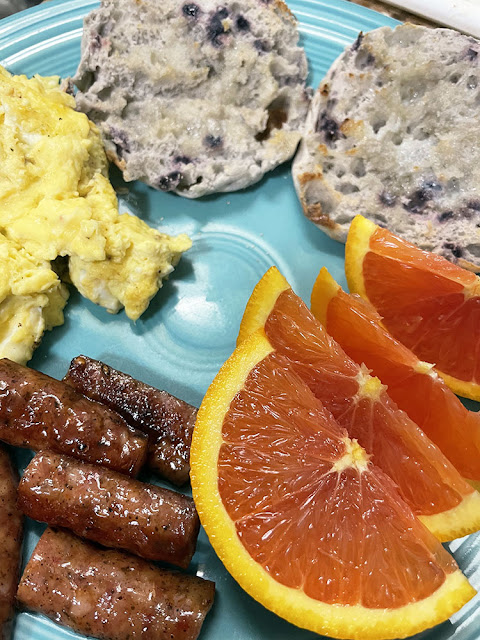 At noon, I had a scheduled video go live. I was able to participate in the You, Me, Same 3 mixed media collaboration this month and made this Inspiration Prompt Junk Journal. 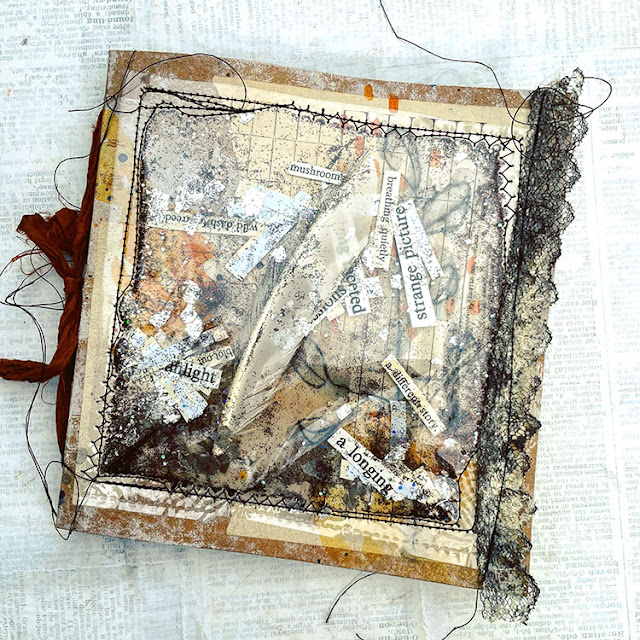 I may share more about the process later (with pictures), but the link above will take you to my YouTube process video.

While popping something in the mail, I had to stop in wonder at the handful of silly azaleas that are blooming a bit early. 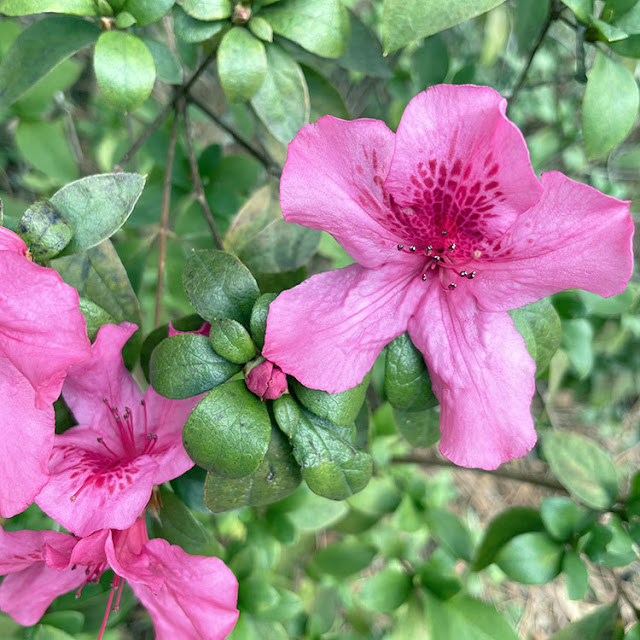 As the day wore on, I felt restless and needed to do something with my hands. Trying out encaustic art has been on my list for ages. So, I decided, "what the heck, why not." and went for it. 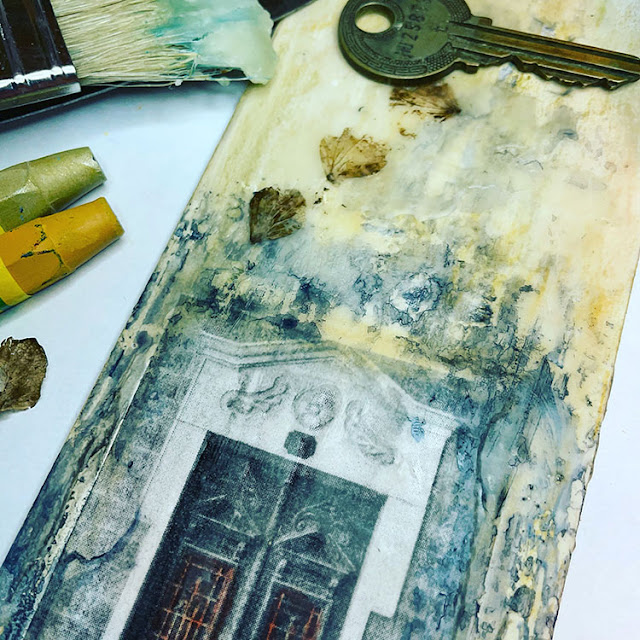 While I'm pretty happy with this result, I realized how little I knew from the few tutorials I've watched and that I need to learn a little more. But, it's something I'm doing more research on now, and am happy I went ahead and tried. Now, I need to test out some of the other skills that are on my dang list (i.e. using a metal saw and enameling.)
If you're looking for some inspiration, I've got you covered:

And now, I really need to get to that 100 Day Project - I don't want to miss it on the first day! I hope you have a week full of inspiration and creativity. Enjoy it!!