The mere fact that I'm even able to write this post means that things are slowing beginning to feel normal again. They won't be completely "normal" for a while, but that's okay - we're okay.

If you don't know, my husband and I live on five acres in Southern Alabama - about 30 minutes from the coast - on the Eastern side of Mobile Bay. We call our property as Silverlox because of its proximity to Silverhill and Loxley - though we live in a magical area that opens up to several other cities also. In any case, we were right in the path of Hurricane Sally. 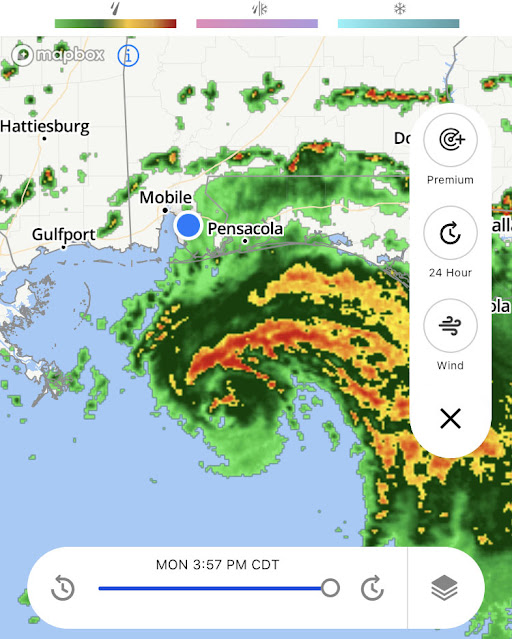 Obviously, that blue dot is us. This was the last picture I took of the radar on Monday afternoon, back when we thought Sally was headed for New Orleans. I had spent the day doing some hurricane prep and stressing a little. But, I didn't do near enough. On Tuesday, the rain really began, and we spent the day inside as the wind began gusting. We lost power in the afternoon for about an hour then it went out for good at about 9pm. As we went to bed shortly thereafter, the storm was a Category 1 and still projected to hit West of us. We were unprepared for what happened next.
With no power, no cell service, and no radio; we were wholly in the dark for HOURS as the rain poured down, the wind howled, and the sky rumbled. Pat and I both woke around 4am and sat in our room listening to the terror raging outside our house, praying that it wasn't as bad as it sounded, and that we would make it through. As the sun rose and we could see outside, we were shaken over what we saw from our windows. (That mostly-down tree was being held up by the power line running down the street in front of the house.) 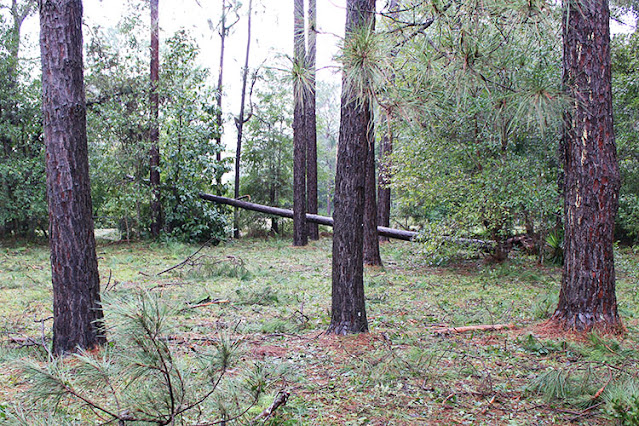 It was a few hours before either of us ventured out. When the winds died down some, Pat ran out to his truck to listen to the radio to see if the storm had passed or if we were just in the eye. Alas, all the news was vague and solely mentioned our neighboring city of Pensacola, FL. We repeated the process of checking the radio for several hours until I was finally able to hear a caller on talk radio plead to know the answer as well.
Running out there was a little worrying because all our cars were parked in the "Back 40" of the property where we figured they'd be more safe because it's a large clearing. (You can kinda see my car on the left side of this picture.) 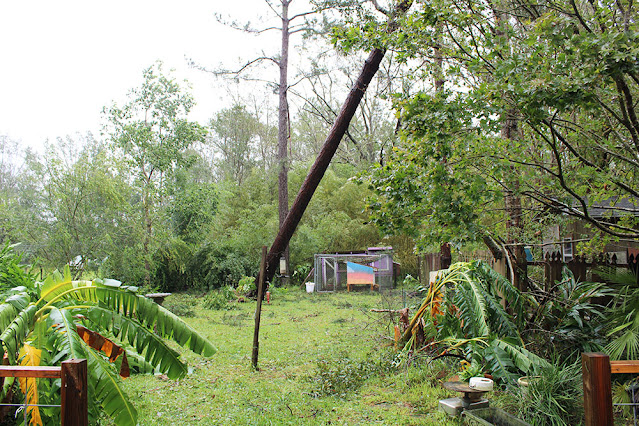 That leaning tree was the first thing I saw out the windows that made me gasp. It's still there too - caught by another tree. It's leaning right over our small shed. 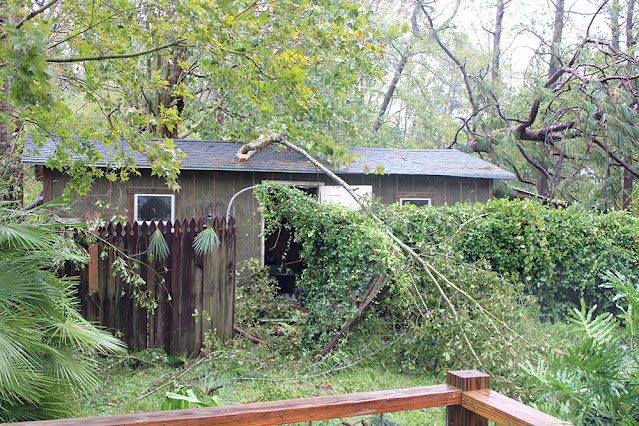 Somehow the door of the shed flew open in the storm, but everything in it looks to be safe (for now, until the tree(s) comes down.) On the right side, you can see another pine tree parallel-ish to the ground.
That tree is laying on our pole barn, where we have all of Pat's tools (CNC machine, Drill Press, Table saw, Band saw, and everything else!) We had to quickly fish out some of them (the chainsaw, rakes, yard clippers, gloves, etc.) so we could start working on clearing the mess. 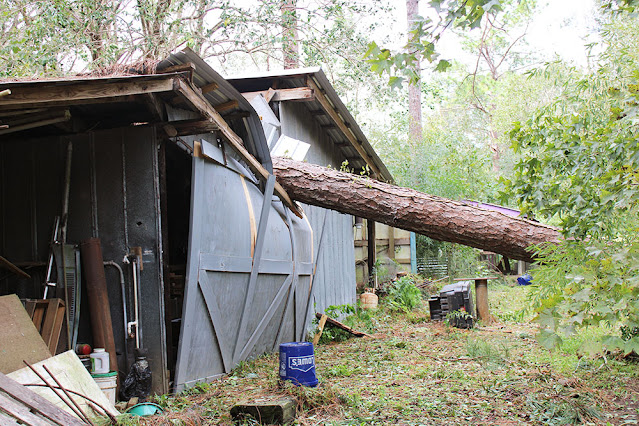 Some large limbs fell on the fence close to where my car would have been parked. 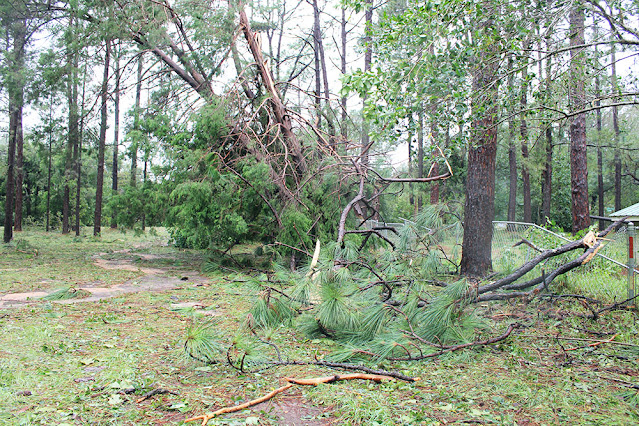 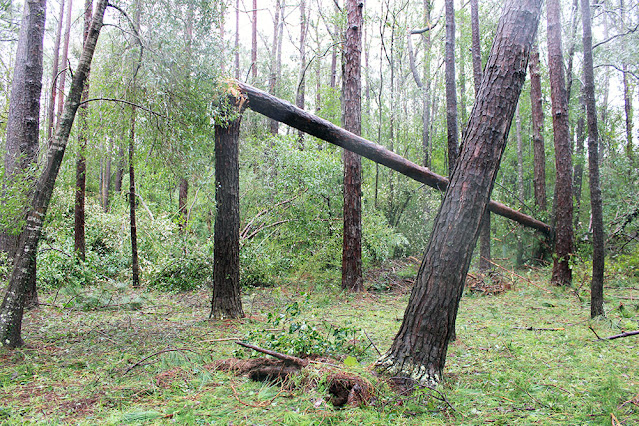 And, it looks like we'll have to have a few of the others taken out eventually (see the roots showing here at the bottom?)
Looking at the direction that everything fell and/or is leaning, you can definitely tell which way the wind was blowing. 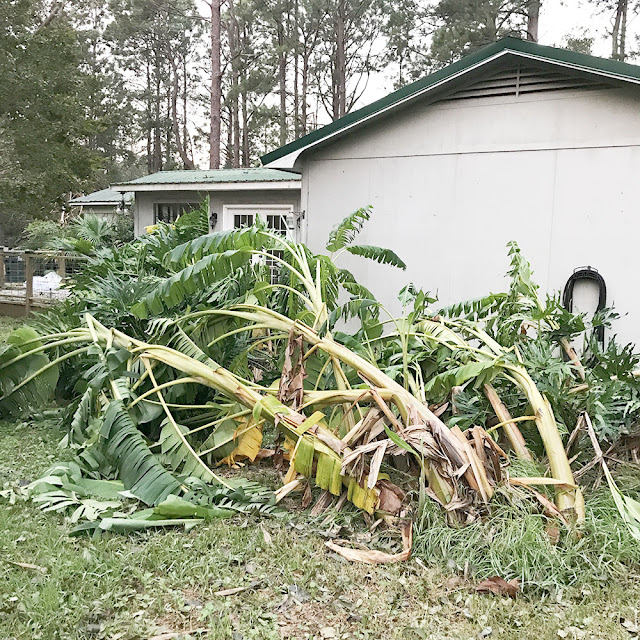 Hours upon hours of it blowing in the same direction at over 100 MPH will do that!
We did get a little water in the house. There was a small leak in the sunroom, but the roof looks fine. And, out little storage garage that's attached to the house got some water that bled into the living room. Fortunately, there were some throw-blankets there that soaked up much of the water. But, several boxes of my books were there too and a few paperbacks didn't make it. All in all, we were very lucky!
As I didn't do a great job of preparing (since the storm was projected to be mild), we ate peanut butter sandwiches for several days. And, without power or cell service, we played 20 Questions for HOURS for a couple of nights. We found that cold showers were perfect for cooling off when there's no air conditioning. At least we still had water! We tried to stay positive.
On Thursday, we finally left home and drove into town. There were trees down on every property we passed. We were able to get cell service for phone calls and texts, but no social media. My mom and step-dad bought and delivered to us a generator, gas, ice, water, batteries, cold drinks, and Fla-vor-pops! 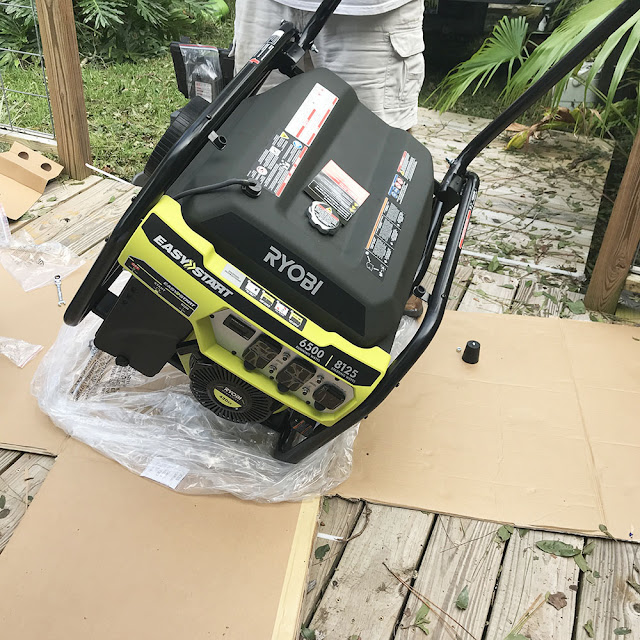 Big thanks to them and my niece Taryn!! I was able to brew coffee on Friday!
We've spent DAYS talking to and checking on friends and family, cleaning up the mess Sally made, and celebrating the little things we're thankful for: a taco truck open, lower temps on Saturday, and trees that stayed where they were.
By Sunday, we started to really put in the effort to get our act together and start clearing debris. 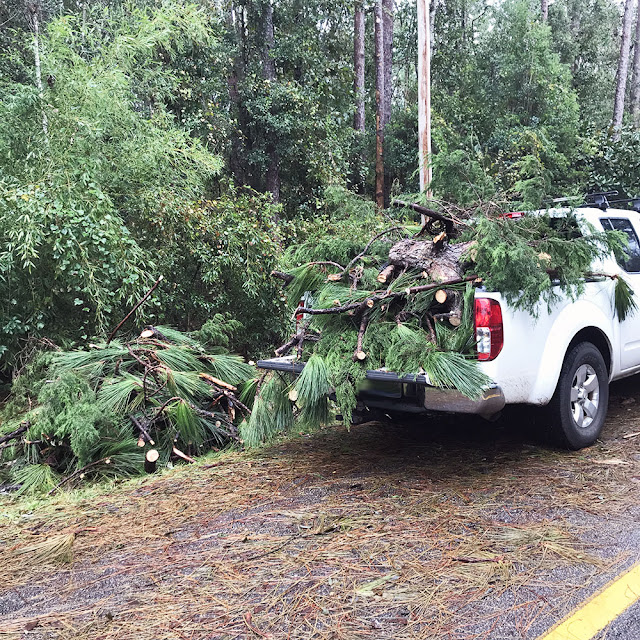 While we unloaded truckload number eight, we spotted a welcome sight. 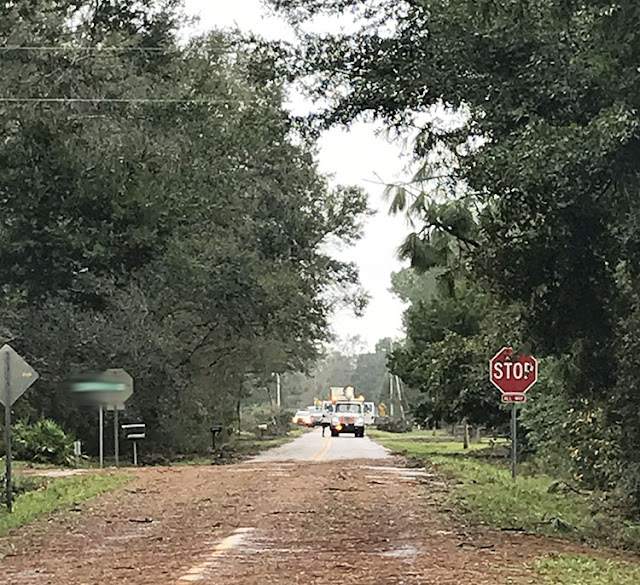 Those heroes in the bucket trucks were ON OUR STREET! We tried not to get too excited. But, within several hours, our power was restored! We couldn't wait to get hot showers, but waited for the water to warm first. It was glorious.
With the power restored, I spent all of Monday morning getting the house picked up, cleaned up, and put back together. It's so hard to do much of that with no light, no hot water, and extension cords running in every direction. In the afternoon, we worked on the yard a little more and even ventured into the woods a little. 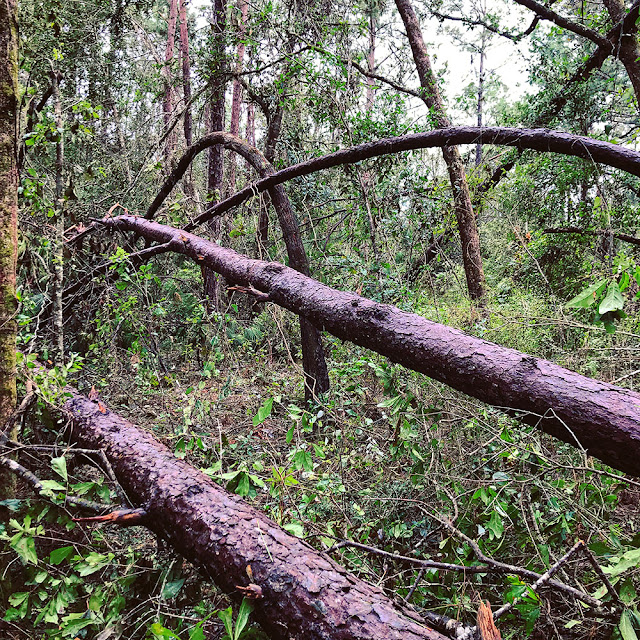 It wasn't great. From one spot, I could see about five LARGE pine trees knocked completely down. But, Pat pointed out that there were plenty still standing. And, after this ordeal, I'm glad we're still standing too.
There's still LOADS more to be done. We've gotten an estimate on removing the three trees that worry us the most, and it's crazy expensive. But, it has to be done. And, we're waiting for the insurance adjuster to get here and let us know what's what. Pat's decided to purchase a tractor to make removing some of the downed trees and debris easier. It'll come in handy for some of the other tasks on the property also. We're just trying to take it one day at a time.
And, we'll likely not stay home for the next hurricane.
Here's hoping you're doing well too!!
at September 22, 2020
Email ThisBlogThis!Share to TwitterShare to FacebookShare to Pinterest
Labels: family, hurricane, nature, silverlox