The theme for the Art Elements challenge this month was mandala. Check out the post from Lesley for examples and information on them. I've personally been familiar with mandalas for only several years now but did try my hand at drawing fairly traditional ones a few years ago. However, I never could get the symmetry quite right. I contemplated this theme for longer than I should have, trying to come up with just the right idea. In looking over the meaning and practice of making mandalas, I realized that they're often used as a meditative practice. After seeing the simple needlework from Lynn of LynnsNeedleWork on Instagram (check out this one) and re-organizing my embroidery floss, I finally came up with something that might count. 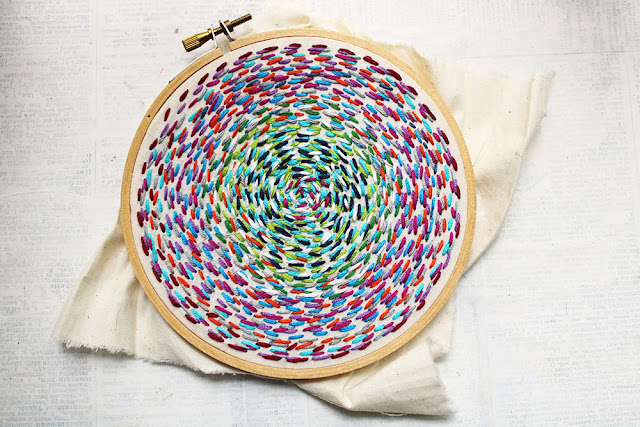 If you've seen my last several posts, you know that I've been a tassel-making madwoman lately: first with a tassel tutorial, then with my earrings for the Honey Do List from Sarajo. 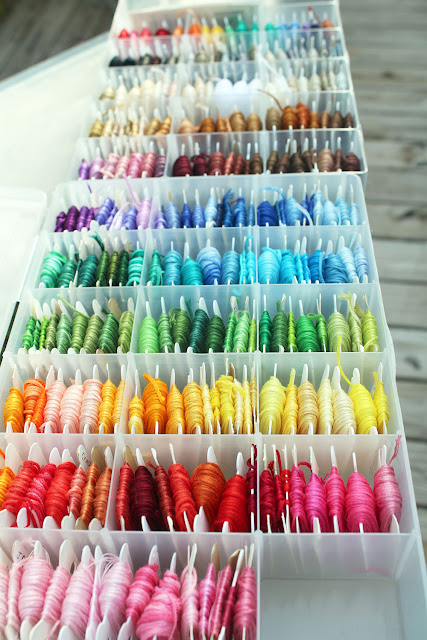 As such, I've had to buy some more floss to get just the colors I need, but my organizers are already so packed AND I ran out of little cards. So, I needed to find a way to use some of what I already have. 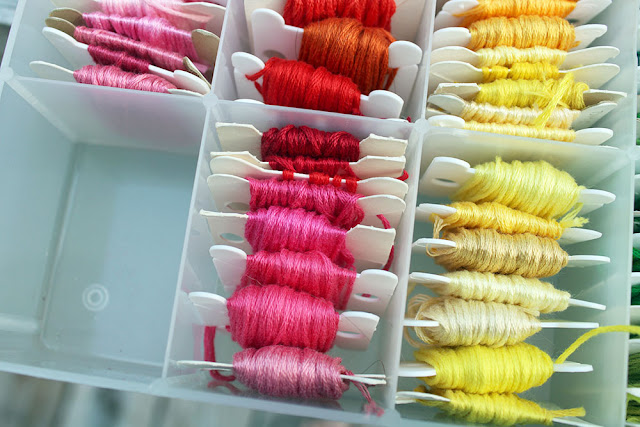 I decided that it would be good to use up some of the little bits of embroidery floss that probably couldn't be worked into much else. See the red one where the white card is showing through, those are the cards I decided to use. 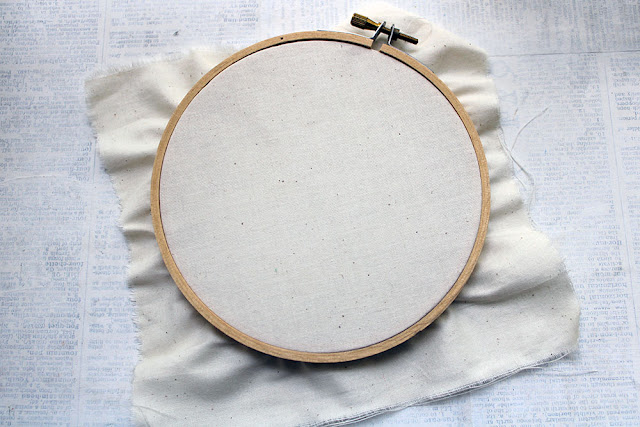 I put a bit of fabric into an embroidery hoop to make sure I kept within the circle idea of a mandala. 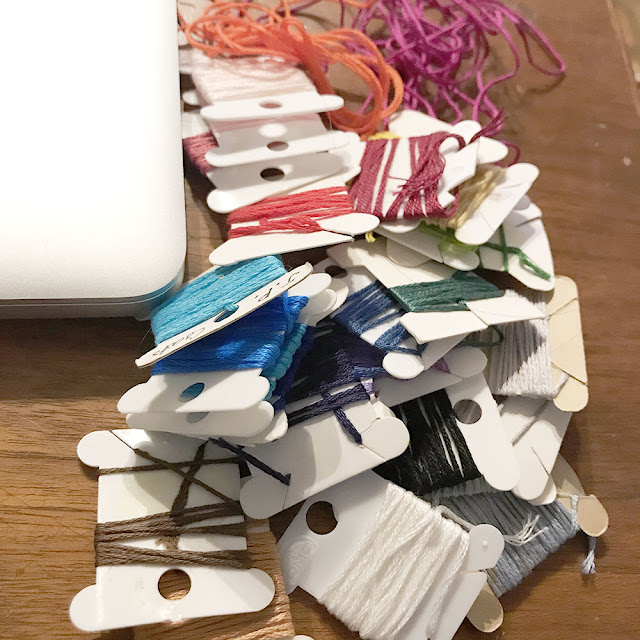 I fished out all those almost-empty cards. 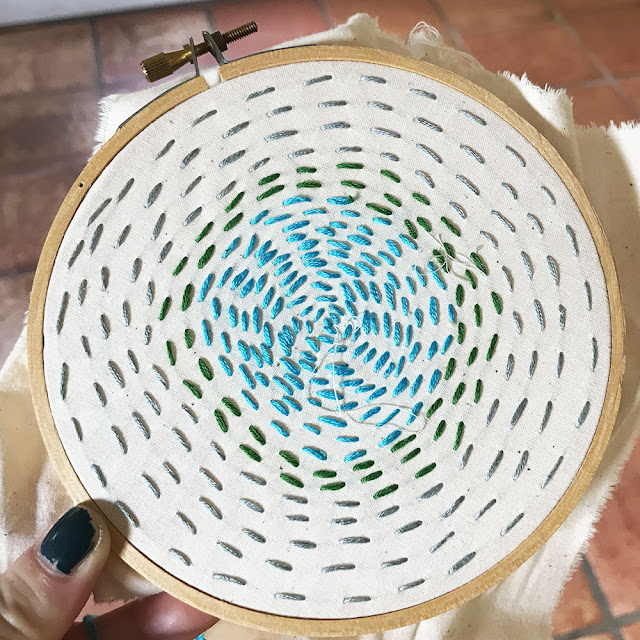 And, I started making circles. Actually, it's more of a spiral...but I'll allow it. 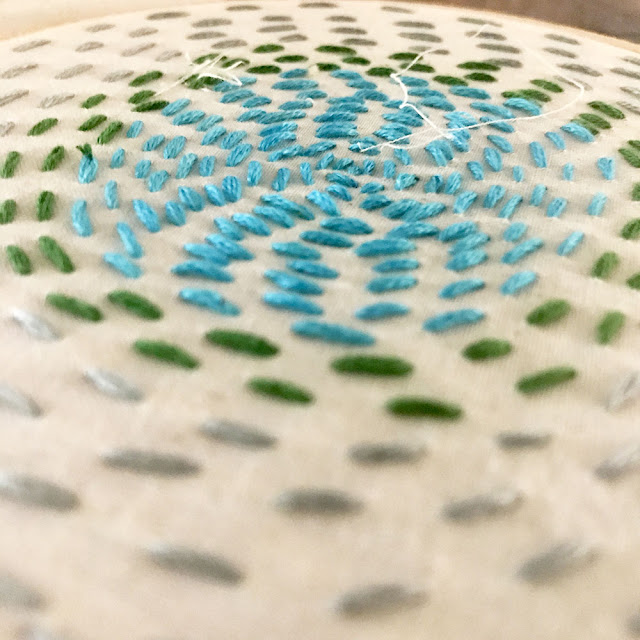 Once I had this bit down on the fabric, I liked it so much that I thought maybe I was done and didn't need to use all that other floss.
However, the repetitive motion of making the stitches and the sounds of the needle piercing the fabric and of the floss moving through it were perfectly meditative (like making a MANDALA!!) I haven't been able to stop! 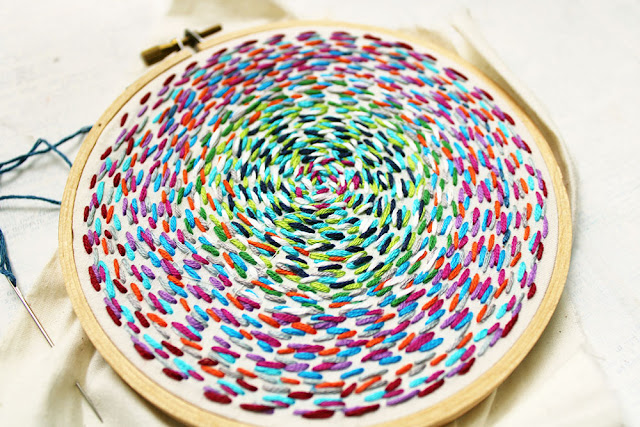 I'm absolutely enjoying the process too much to quit now. 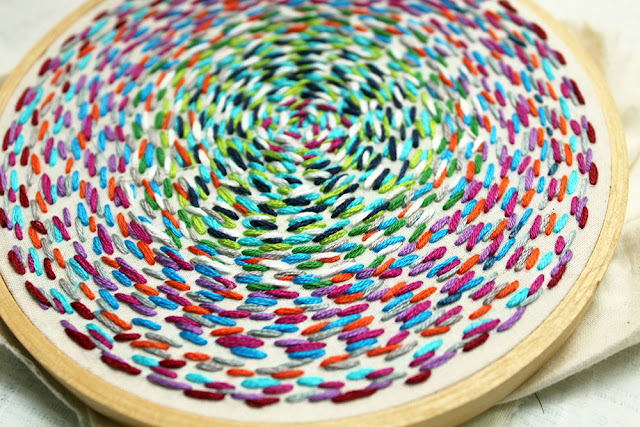 And, there's still plenty of fabric still showing.
Plus, I haven't used up all that embroidery floss yet. 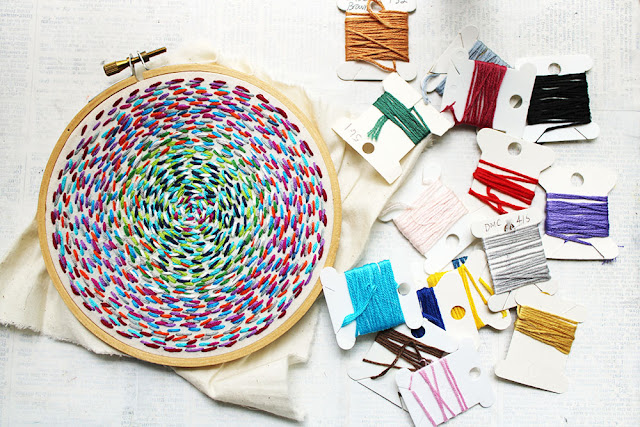 So, okay...this isn't a traditional mandala with geometric shapes making it up. But, I feel like the purpose was the same to some extent. And, I think the end result is going to be pretty awesome. (I'll share it in one of my weekly posts when I finally get it done.) For now, let me thank Lesley for the theme. I've really enjoyed this little project. And, I'd like to encourage you to head over to the Art Elements Community on Facebook and join up so you can see the album full of all the other Mandalas made for this month.
at August 27, 2020
Email ThisBlogThis!Share to TwitterShare to FacebookShare to Pinterest
Labels: challenge, embroidery, reveal