So, how are you doing with the social distancing and staying home? It's got its ups and downs for me. I don't really have a problem finding ways to entertain myself at home, but hate not having the option to just run out for a few things if I need them. It's a little maddening, but I totally get it. I can't say I stayed home all week, I did have to run out for a few things like groceries, but have been pretty good otherwise. Take a peek. 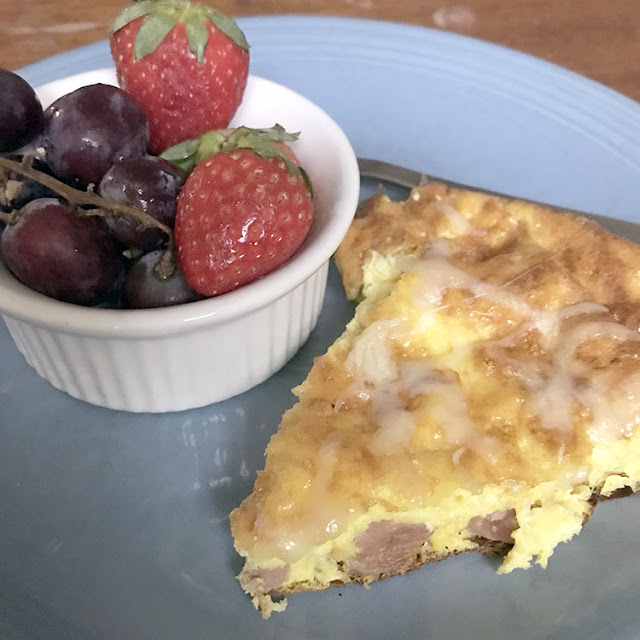 We started Sunday with a filling breakfast of another ham and cheese frittata along with some fruit. Yum!

That fueled us up for a day of yard work. Pat focused on the pool and mowing the grass while I tried to clear some of the "burn pile." 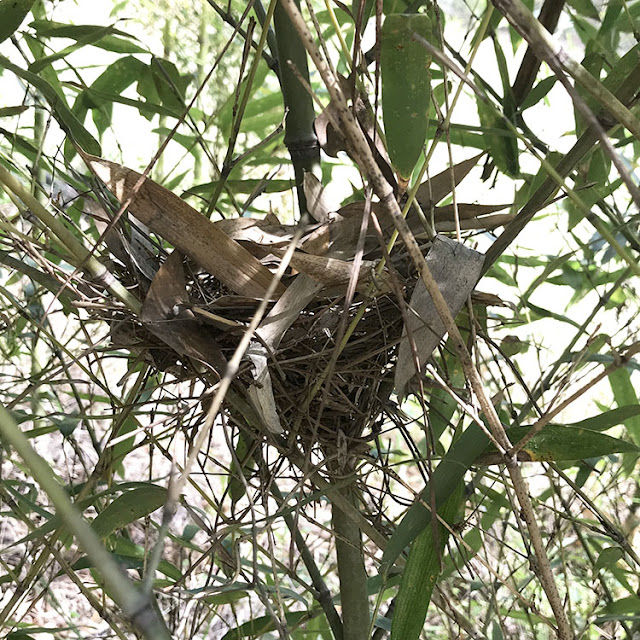 That "pile" is mostly weeds with a bunch of bamboo growing in it. As such, my main task was cutting down the bamboo. Don't worry - there's still plenty of it on the property.

One of the things that had me so motivated to clear that area is that it's one of the best places to find treasures. And, I let myself do just that as I cleared the bamboo. 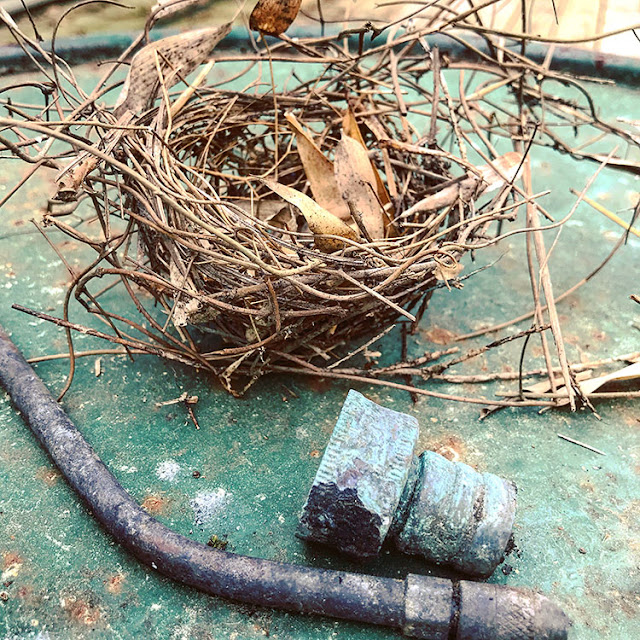 I did pull that birds nest out of the bamboo and discovered a few metal pieces. However, there was also quite a bit of garbage that the previous owner apparently tried to burn (you should see the piles of carpeting that we're going to have to pull out of the grass to throw away!)

Monday meant grocery shopping, and it was a madhouse as you might expect. I got what I could. Not knowing how this virus business might impact my business, I'm still listing things on Etsy for the time being. These pretty earrings went into the shop on Monday. 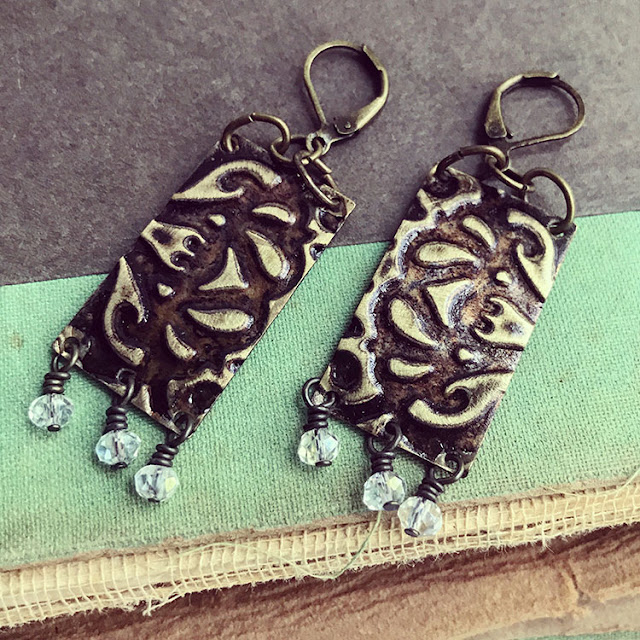 They even sold the other day and have been shipped out!

I made a special trip to the local coffee shop to use their internet to upload a few videos. 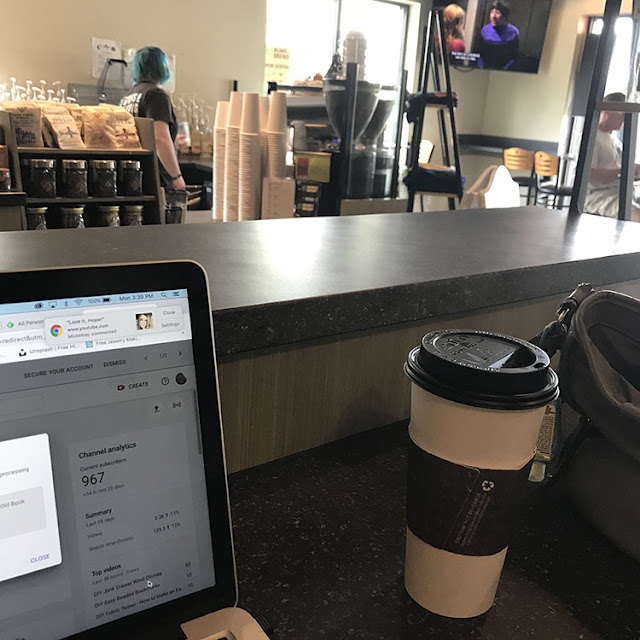 I was surprised to see how many people were there. But, who am I to talk since I was there too?

As I walked the property on Tuesday, I spotted a bright pop of white among the pine straw and dead leaves. 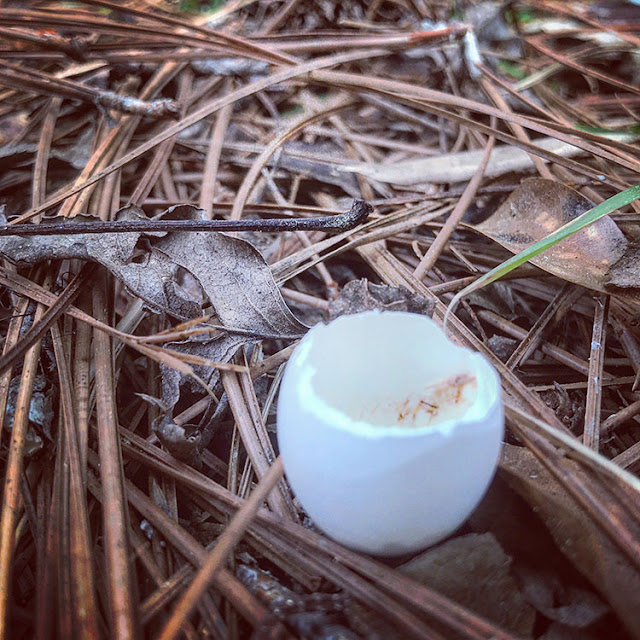 It was a tiny hatched egg and a great reminder that life goes on.

I also took a moment to sniff the wisteria. 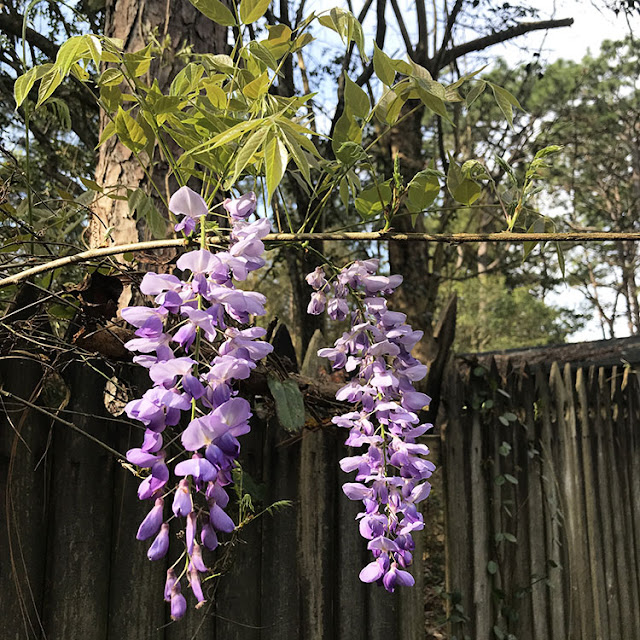 It's one of my favorite flowers but its viny nature means that it has invaded much of the property. We've been fighting it since we moved to Silverlox, and realize that we'll likely never be rid of all of it. But, we're going to do our best to keep it from taking down any more trees. (Wisteria had invaded and suffocated at least two trees that we ended up having to have removed.)

Before heading to my mom's on Wednesday, I enjoyed my morning ritual on the back porch swing. In the mist and dew of the morning, I spied this tangle of a web on the swing's frame. 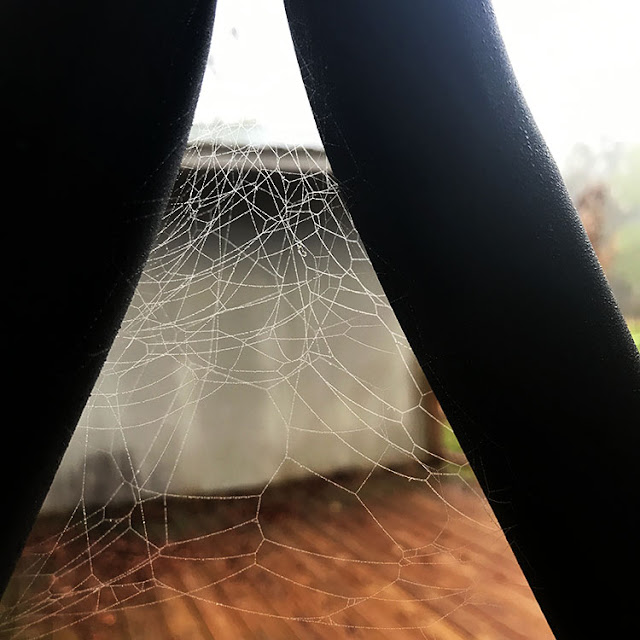 That's two weeks in a row that I've shared a spider web! Y'all might need to start worrying about me! I spent the day with my nieces and baked cookies that were intended for a bake sale. About the time I got the last tray in the oven, I got a text that the fundraiser was postponed. Ah well, that just meant more cookies for us!

While I was at my mom's, a packaged arrived at my house. 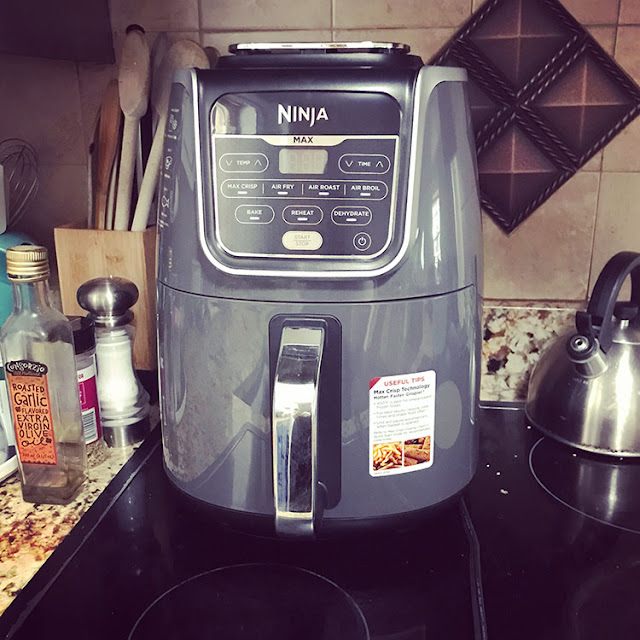 Pat and I broke down and ordered an air-fryer. We figured with staying home, it would be the perfect time to play with a new toy. And play I did!

I made four different kinds of chips. 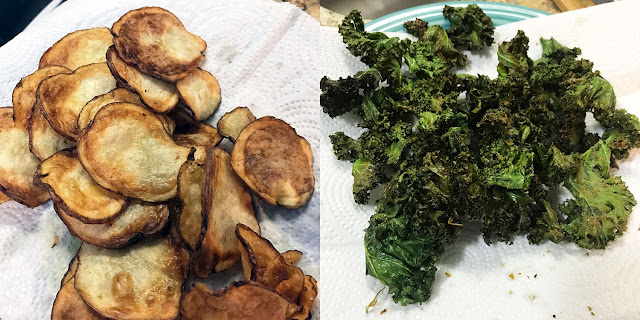 I started with a half of a raw sweet potato that I had leftover. However, I sliced it too thick for it to crisp up on me. The red potato chips and kale chips were the hit of the day. I also made chips from flour tortillas to go with the tortilla soup for dinner. Those were. . . fine. Since then, I've also made wings. OMG! Those were AMAZING! And, we're not even big wing-eaters. But, now we're converts as it was so easy and so yummy. I also fried some zucchini slices last night. Pat and my niece really liked them. I thought they were okay.

I ventured back out into public on Friday as I needed to upload another video and pick up a few things at the store. I tried the same coffee shop, but they were only allowing carry-outs. So, I got my smoothie to go and sat in the car while my video did its thing. Back at the house, I got creative with what was in the fridge and made some fried rice. 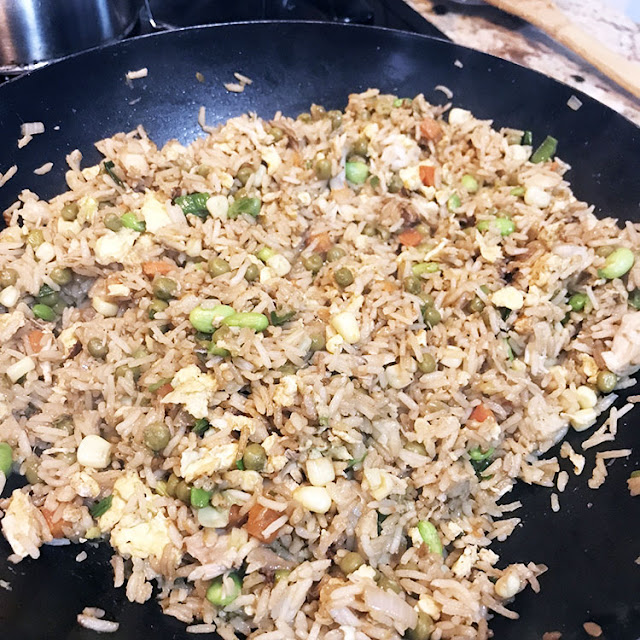 It's such a great way to use up that leftover rice and any leftover veggies and meat. In fact, I usually make more rice than we need for a meal just so I can have the leftover rice to fry it later. (What is UP with me frying everything!?) And cold, leftover rice fries so much better than just-cooked rice. I promise!

While the pool isn't swim-ready yet, I spent a little time out by it that afternoon and noticed that the loquats are almost ripe. 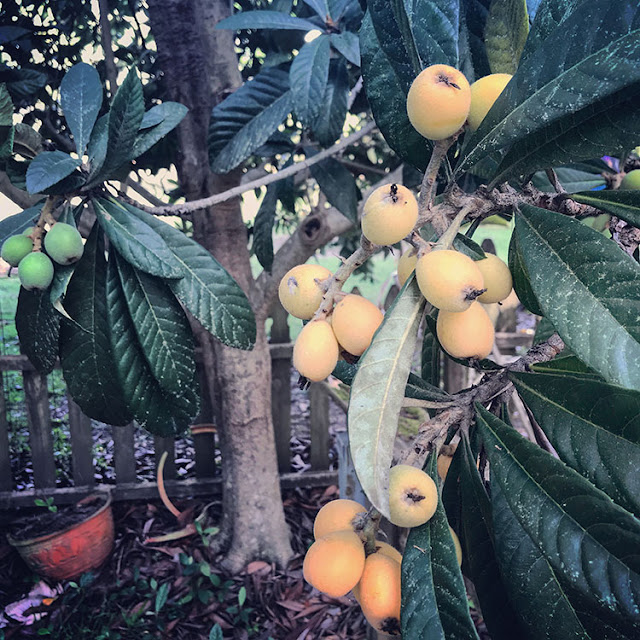 I'm still trying to decide if I want to make jelly again this year. I need to make that decision before I start picking. If I'm not up for it, I'd rather let the birds have the fruit.

I had hoped to get a bunch of yard work done on Saturday. But, we woke up to rain, While the rain stopped before too long, the clouds lingered and smothered my motivation to work outside. I did tackle a few tasks in the craft room and worked out playing Beat Saber on the VR headset. And, when I ventured outside to snap a few photos, I found that the bees weren't suffering from a lack of motivation. 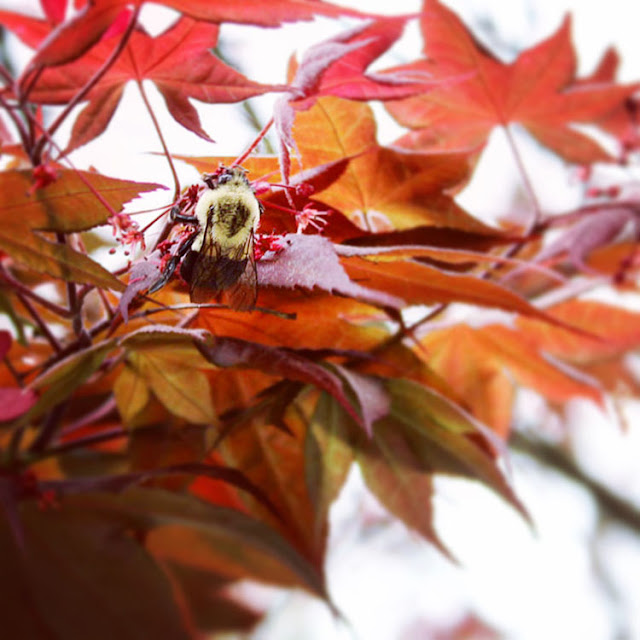 I spied a few large bumbles who were busy pollinating the tiny flowers that have recently bloomed on the Japenese Maple.

By the afternoon, I was itching for some fresh air, so I grabbed a beer and a beading project and enjoyed all of it on the back porch. 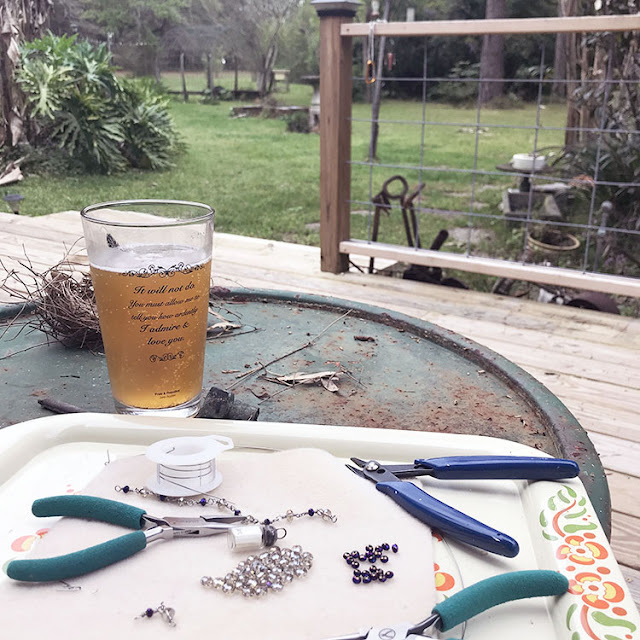 After dinner, Pat, the niece, and I watched a few episodes of Locke & Key on Netflix. Have you seen it? I'm really enjoying it! It's just my style so far and somehow a mix of Stranger Things and The Haunting of Hill House with a dash of family-friendliness like in Sabrina the Teenage Witch.

So, that was my week. What are you doing to stay busy? Here are some links to hopefully inspire you!

That list may keep you busy for a while. I'd like to know what's keeping you busy and your spirits up during this crisis. Please share with me and the rest of us. It's going to take all of us to get through this! Wishing you a healthy, happy week!
Labels: etsy flowers food found objects local nature silverlox
CraftyHope
I’m a jewelry-artist, treasure hunter, & nature-lover that finds joy in the smallest things. I hope to spread that joy and inspiration.