There was an extra day in this year, and it was this past week. Did you spend it wisely? I sure hope so, ad I know I did. As the 29th (Leap Day) was the last one of this week, we'll get to it last. Let's start our peek at the beginning: Sunday. 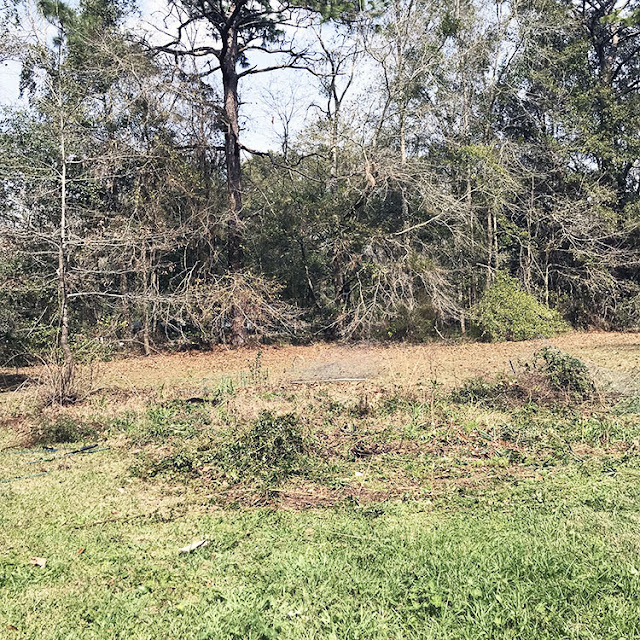 This photo may mean nothing to you, but it's how Pat and I spent most of Sunday: out in the yard, tearing down the raised bed garden and its fencing. When we made the garden, we used untreated wood so the chemicals wouldn't seep into the soil and spoil the plants. That also meant that the wood rotted away pretty quickly. The fence also became a problem as instead of keeping nature out, it was simply a structure for the weeds to climb. When we re-do the garden, I'm hoping to use cinderblocks instead of the wood to make it withstand a little more of our weather.  We exhausted ourselves with this one task. It was an undertaking for sure! 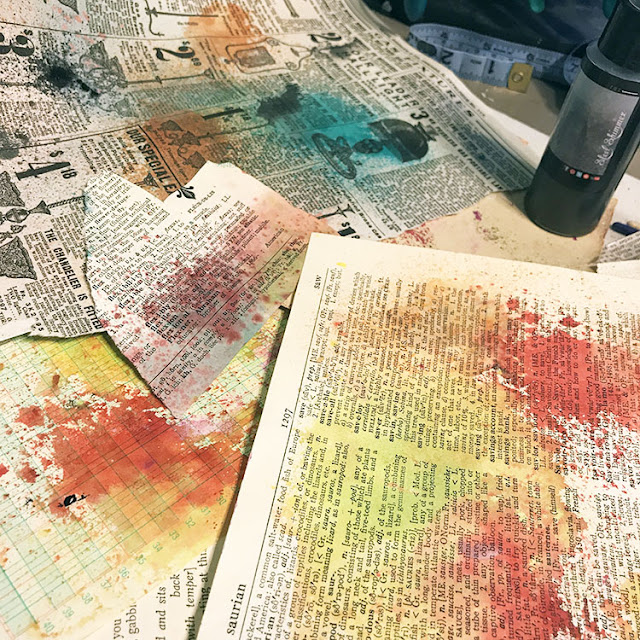 Monday was a bit of a slower pace as I knocked out my usual planning and shopping tasks then decided to sort through my spray inks and unclog the nozzles of ones that wouldn't spray. This meant testing ALL OF THEM. But, I made some pretty paper in the process.

Tuesday was Mardi Gras. While I usually head downtown with my mom and nieces, the nieces had other plans and it just didn't seem like a time for celebration after the last several weeks. So, I stayed home and partied at the craft desk! I began by working on my pendant for the Letters reveal for Art Elements. 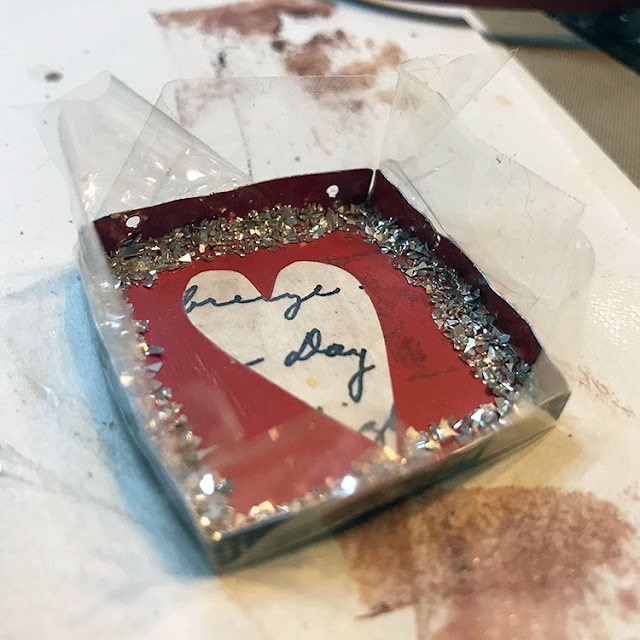 I also spent a nice chunk of the morning organizing my spray inks. 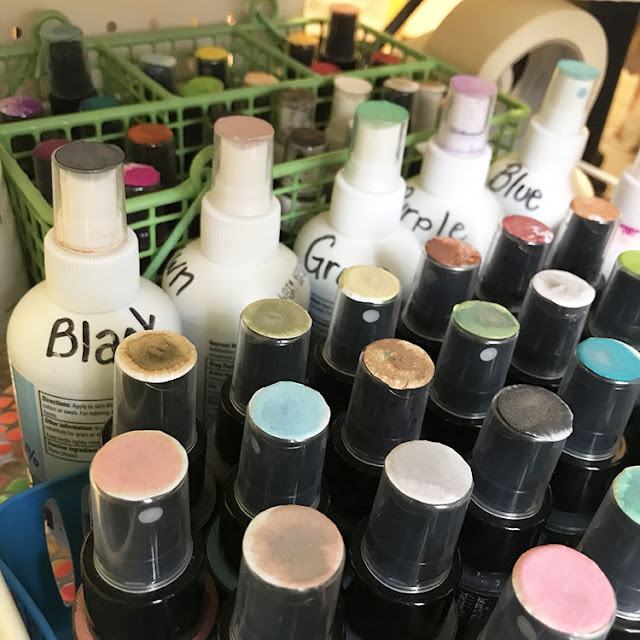 See all the swatches on the tops? I spent much of Tuesday spraying round stickers to label the tops of the inks. Now, I hope to find and use my inks more often. 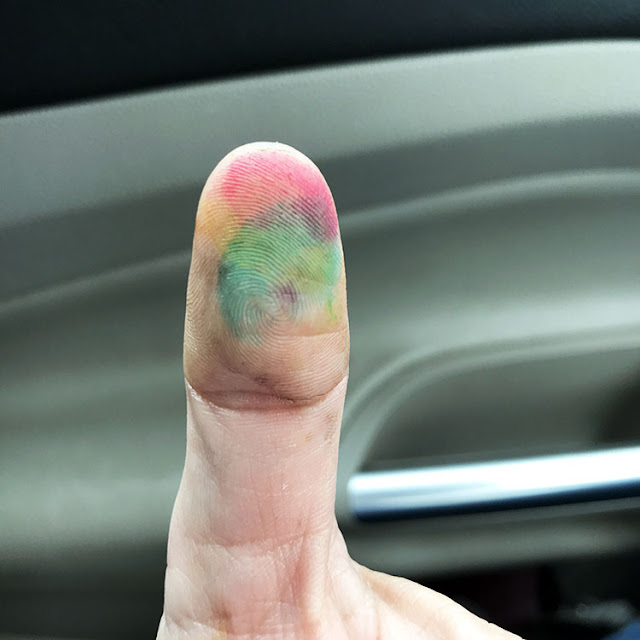 And, in the end, my thumb was glorious! I don't think I could have made it make that rainbow pattern if I had tried. So, I was a little fancy for Mardi Gras!

As I headed to Mobile on Wednesday to help my mom take care of some of my grandmother's things, I couldn't help but revel in the debris left behind from the Fat Tuesday celebrations in downtown Mobile. 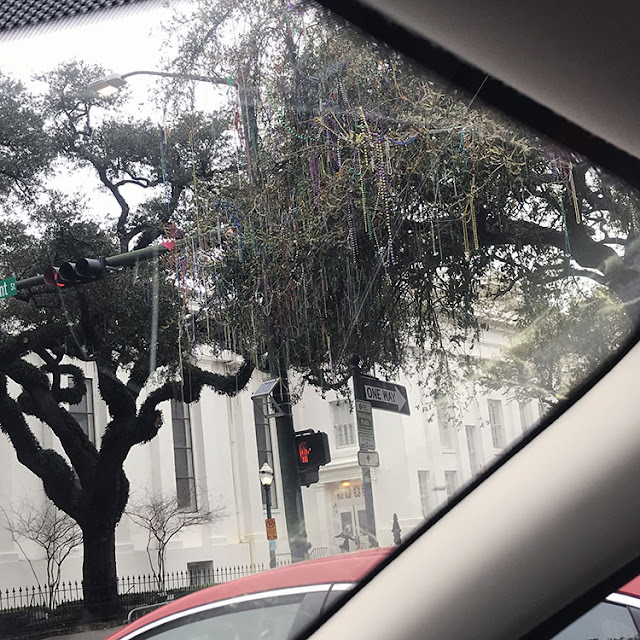 Check out that tree with all its beads!! Don't worry, I was still stopped at the light when I took the picture and didn't put anyone in danger fiddling with my phone.

Thursday was a beautiful but chilly day as I knocked out quite a few tasks on my to-do list. 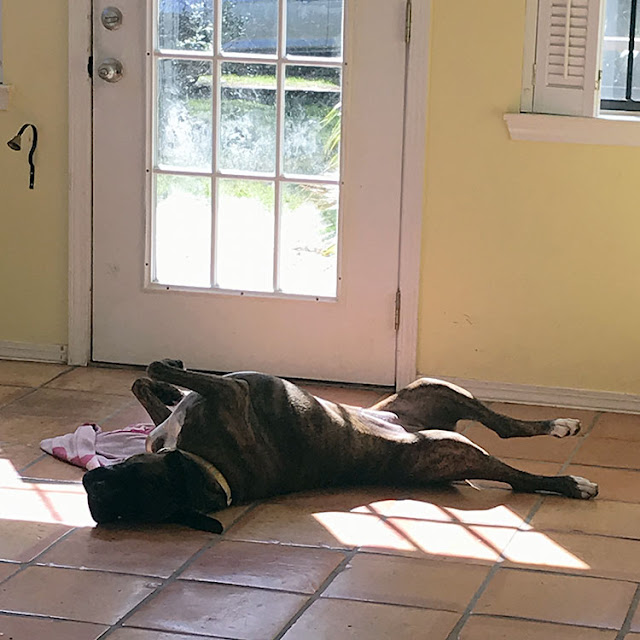 Zoe just reveled in the sunshine!

While taking Zoe out on Friday, I couldn't help but stop and take in the azaleas that have popped. 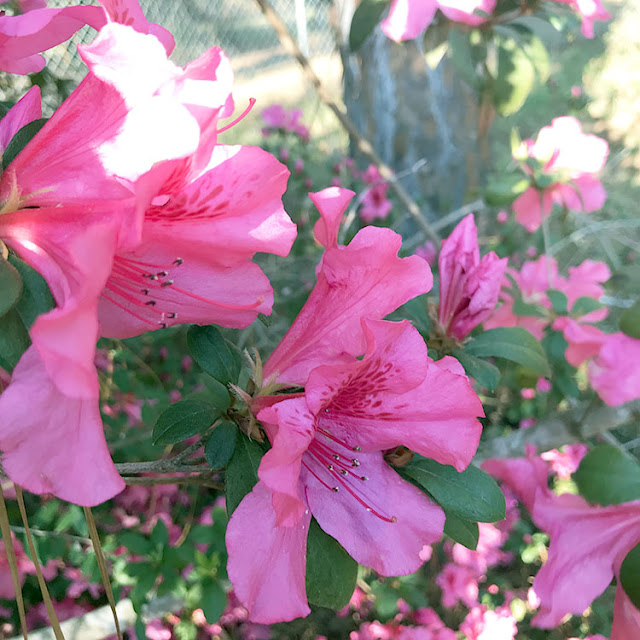 It was still quite chilly, but they were insisting that spring had sprung.

Pat received a shipment of t-shirts for his new recording studio. 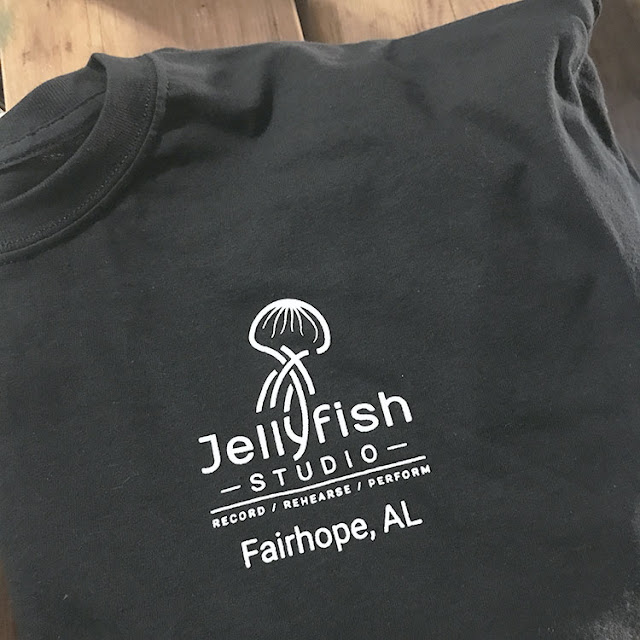 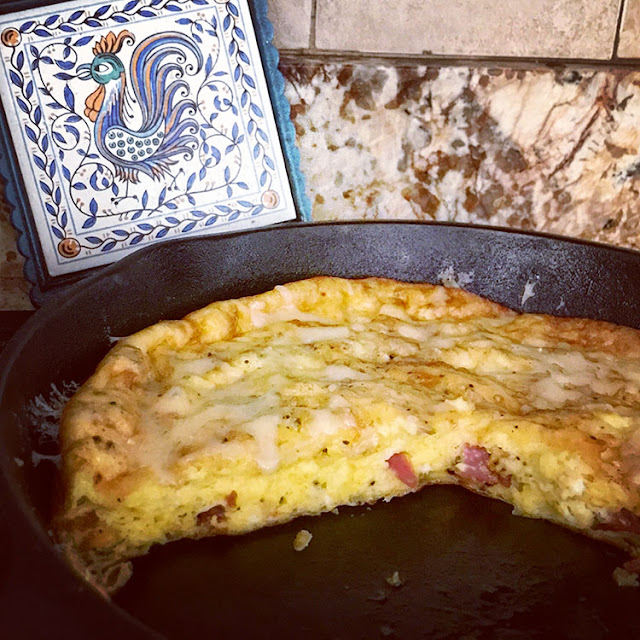 I made sure we were fueled up for the day to come by making my first ever frittata. We LOVED it, and I will definitely be making many more!

After Pat ran to the studio to collect some of his gear, we ran by a garage sale in the neighborhood and scored a large pile of reclaimed barn wood for a steal. I can't wait for Pat to make some picture frames with it. From there, we went to Cafe Acadiana for lunch. 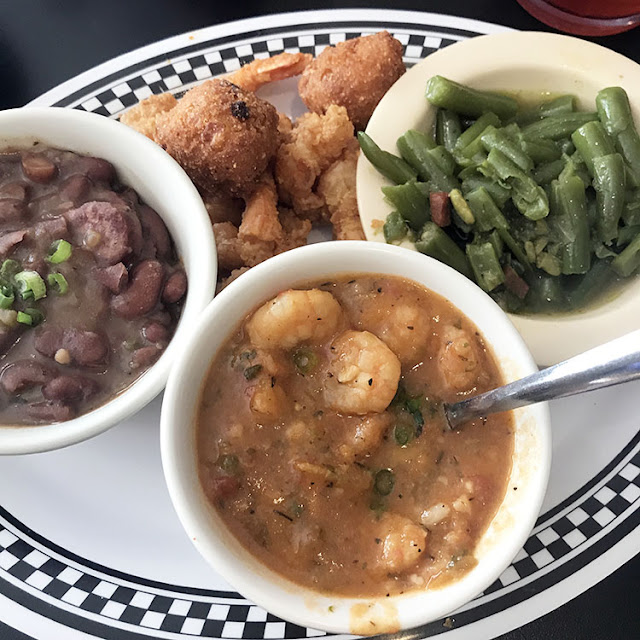 I don't care what you order there, it's always good and always looks like a magazine shoot.

We were lazy much of the rest of the afternoon as we knew we'd be out late. One of Pat's bands had a gig at The Hangout in Gulf Shores, and I decided to go too. 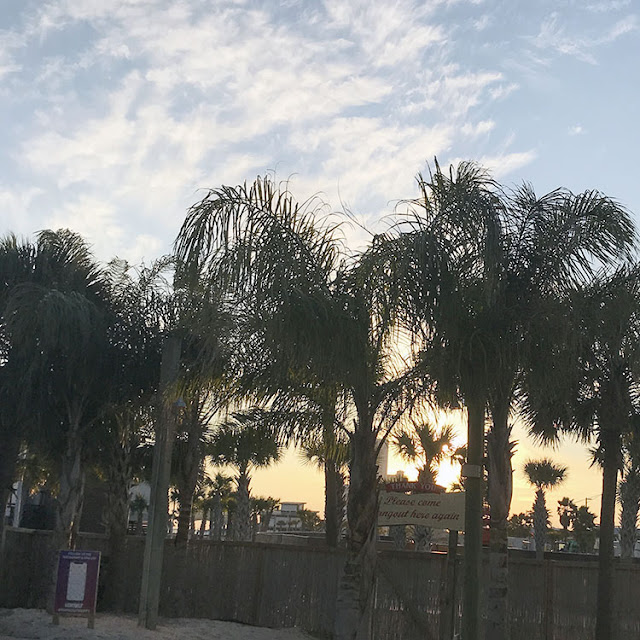 As they set up and had sound-check, I watched the sunset.

Then, the real show began! 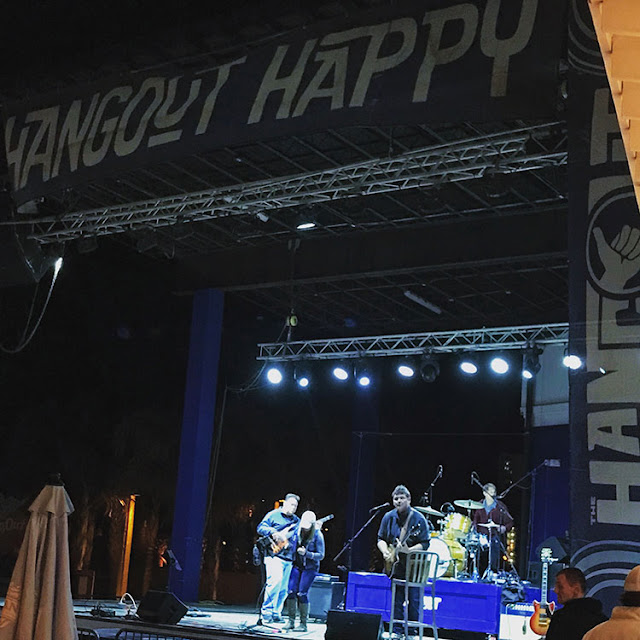 Though it was windy and still chilly, it was a nice way to end the week.

I've already packed some creativity into this week, but can't wait to continue that trend. Here's some inspiration for you to stay creative as well.


As I mentioned, I'm already off and running with the creativity this week. Make sure to check out my Instagram feed if you want to see more! I hope your week is full of sunshine and creativity too!
at March 02, 2020
Email ThisBlogThis!Share to TwitterShare to FacebookShare to Pinterest
Labels: art journal, create, flowers, food, inspiration, local, Mardi Gras, mixed media, Pat, pets, silverlox, week in review