Can I just tell you how much I love the monthly Art Elements Theme Challenge? One of the team members selects a theme, anyone with a blog can participate, and you're welcome to use any medium you want to embody the theme. It's brilliant! This month, Jennifer Cameron chose to inspire us with "Letters" as the theme. We could take that any way we wanted, and I did - in the form of two projects. 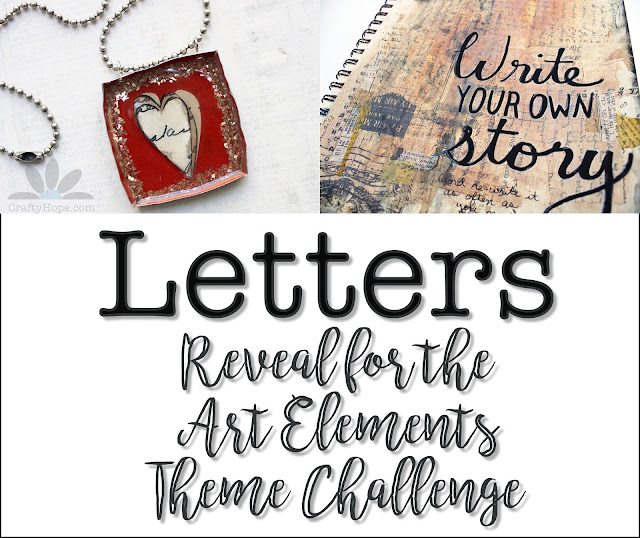 Let me start with the one I finished first - an art journal page. 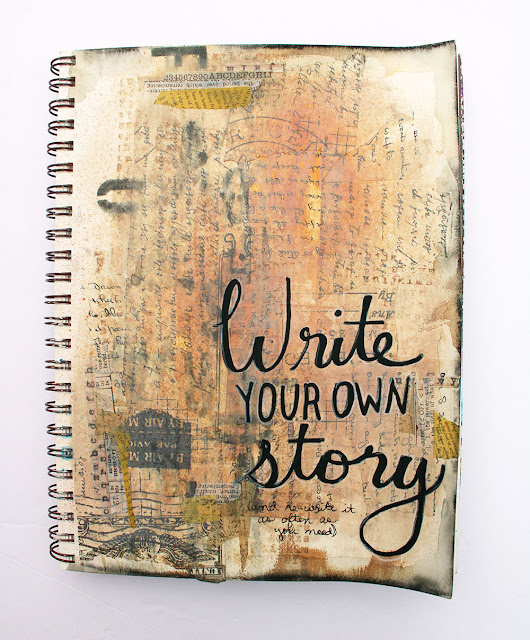 I used a fairly large mixed media journal for this project and layered on a collage of an actual handwritten letter and Tim Holtz Tissue Wrap in the Postale pattern. And with those two things, I had included letters in two forms. Done! Ha, not really. 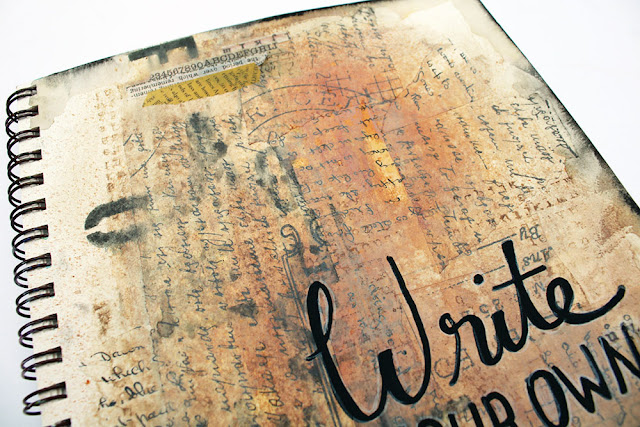 I used several brown spray inks to add the color and water to take some of it away. 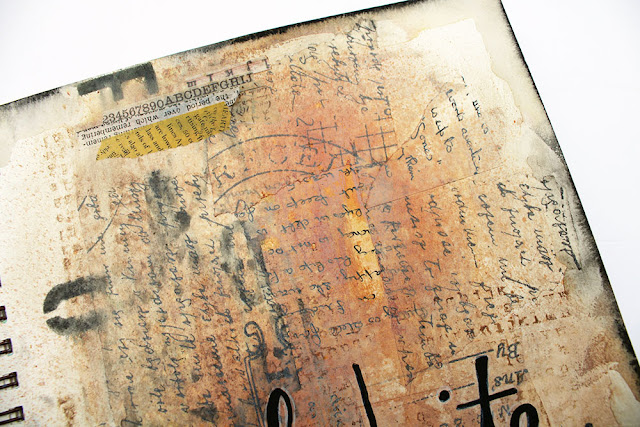 Letters were stenciled and stamped on with Distress Oxide ink. 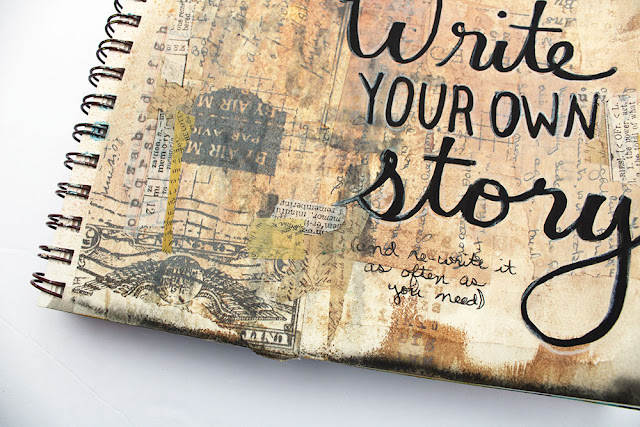 And, I added washi tape with letters and words on them in a few spots. 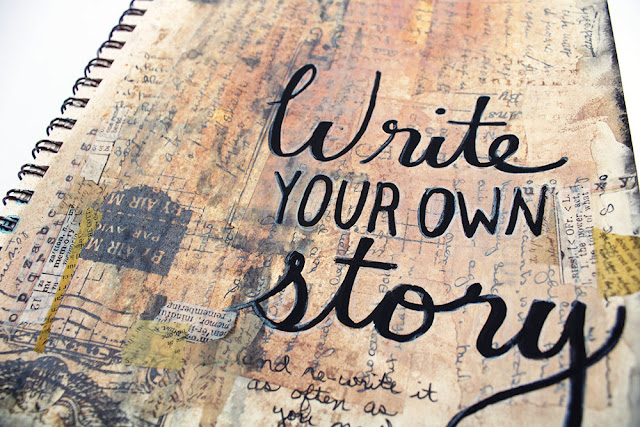 Finally, I  used hand-lettering to create a phrase I thought was appropriate and would finish up my overabundance of letters.

I remembered to record my process since this Letters Art Journal Page was created specifically for this challenge.
It's always fun to get messy in the art journal!

The next project was actually started months and months ago when I made the small tin box. I'm not even sure how long ago it was. At the beginning of January, I picked it back up, deciding it would be a good Valentine project. But, this was as far as I got. 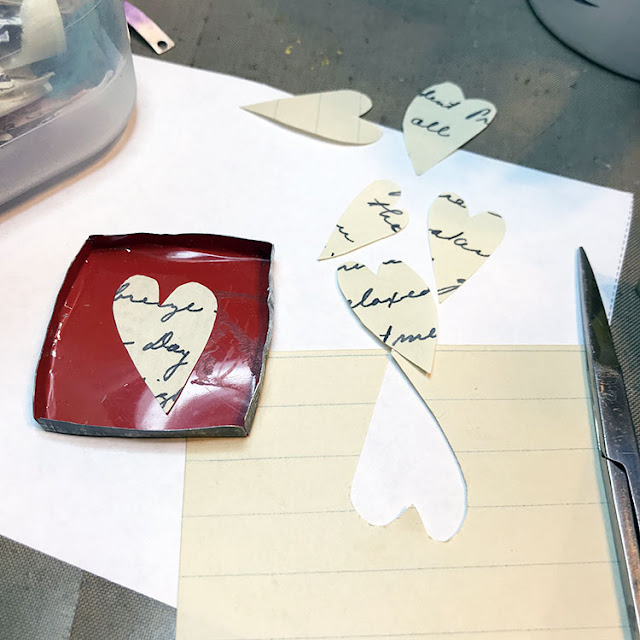 When I saw this month's Letter theme, I decided that it would be a good opportunity to finish the little box, especially since it was a vintage hand-written love letter that was cut for the hearts. So, I began by gluing down the first heart with mod podge. 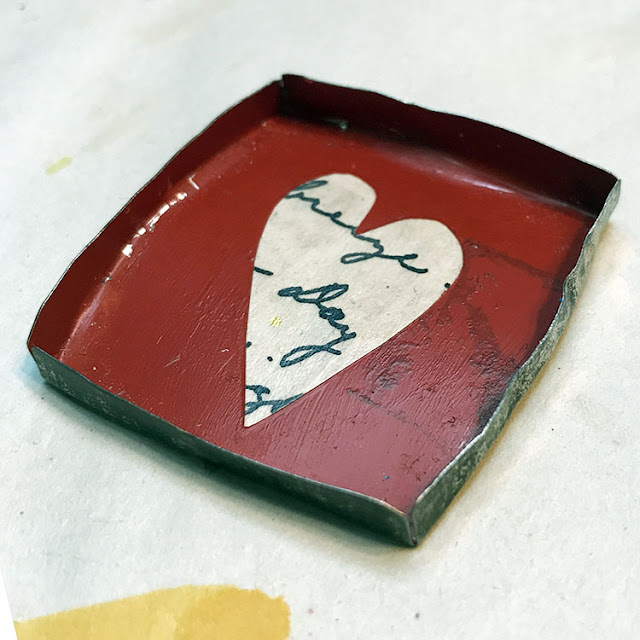 This not only secured the paper but also helped to seal it for the steps to come. 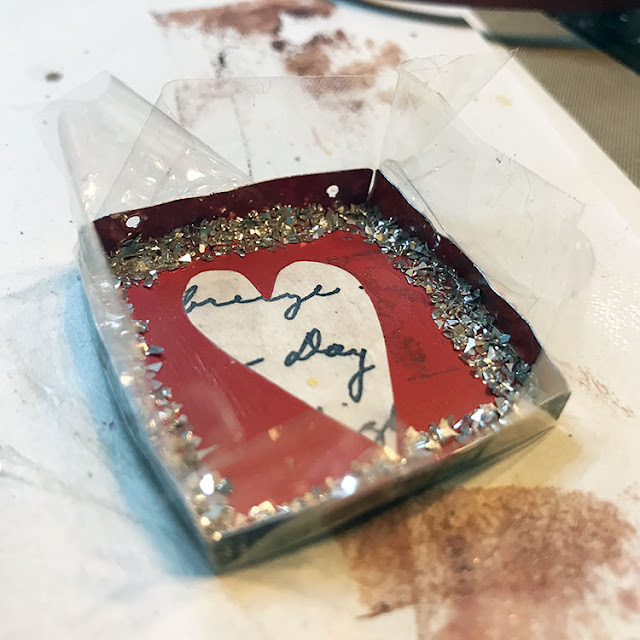 A metal punch was used to create two holes at the top of the box. I applied more mod podge to the outside edges of the box before sprinkling in some silver German glass glitter (from Ice Resin). Once the glue was dry, I wrapped the outside of the box in packing tape. 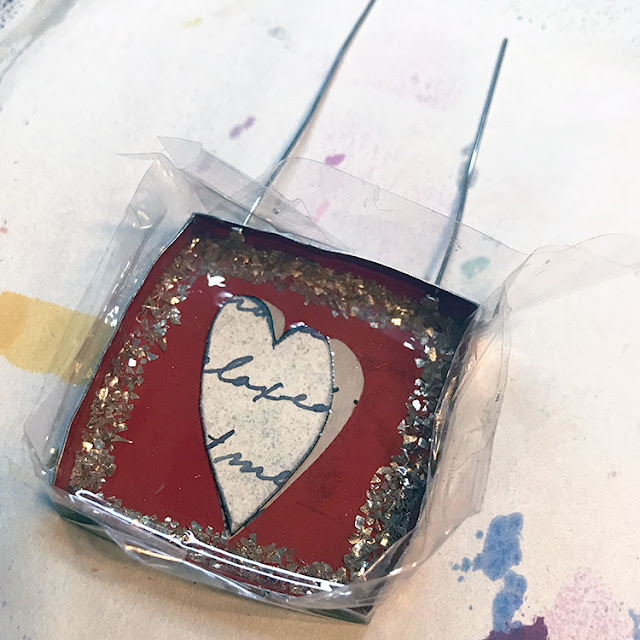 The packing tape helped to contain the Ice Resin that I poured in a thin layer into the box. After the resin had dried for a few hours and was still tacky, I placed another one of the hearts (a smaller one) on top of the first. This one had been edged with Staz-on black ink but not sealed. When the resin was cured, I slipped headpins into the punched holes - through the tape - before the holes were covered in the second layer of resin. 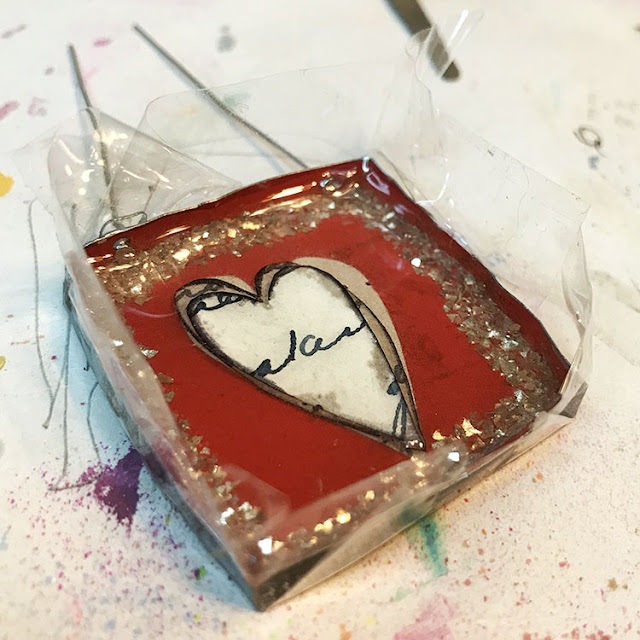 Once the second layer was cured, I added a final black-edged heart. This one was sealed with mod podge (though some of the resin has seeped into it) before getting stuck onto the other hearts and sealed under a third layer of resin.

For now, I'm letting the third layer be the last one as I like that this thin layer lets some of the edges of the last heart poke up a tiny bit. Once I was sure this layer was dry, I removed the tape and created simple loops with the headpins. Then, the piece was transformed into a necklace with the addition of some ball chain. 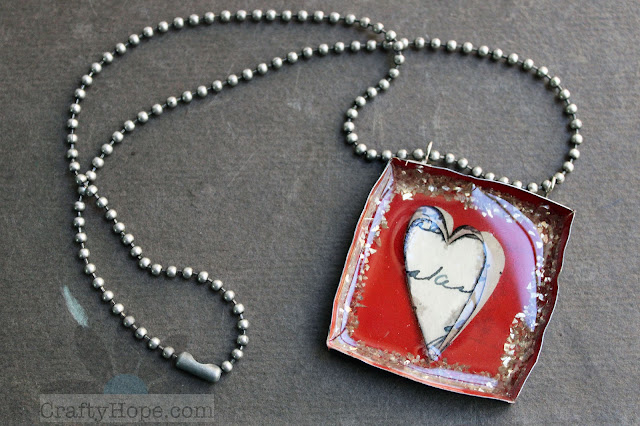 And, I REALLY love it! 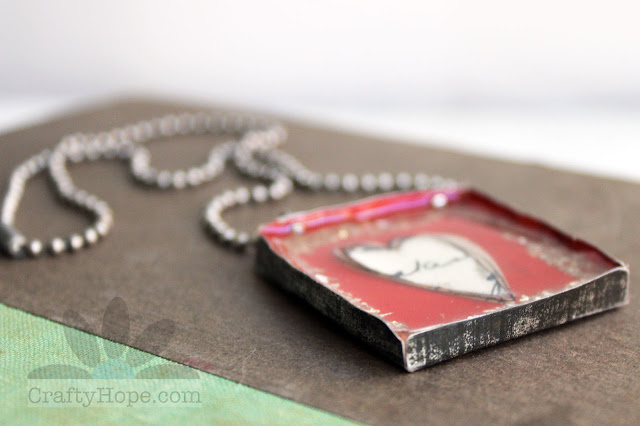 I should tell you that the red portion of the tin was the outside of it while the inside portion was a distressed silver. 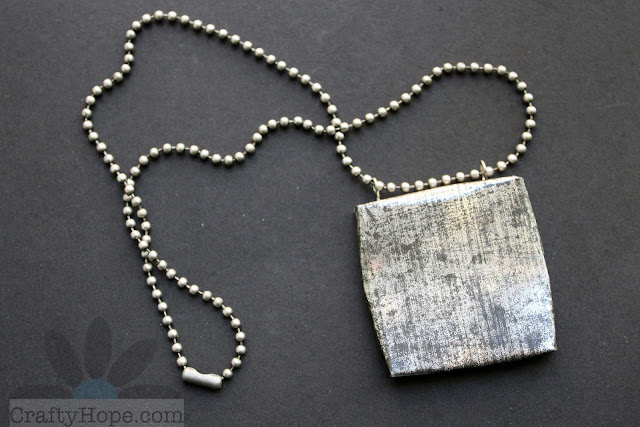 There's absolutely nothing perfect about this necklace, but I think that's the charm of it. 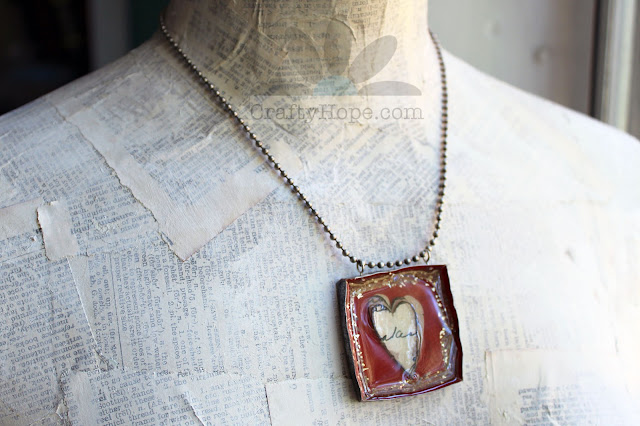 I know that the letter portion of this reveal is pretty weak, but I did highlight that handwritten love letter in an unexpected manner. 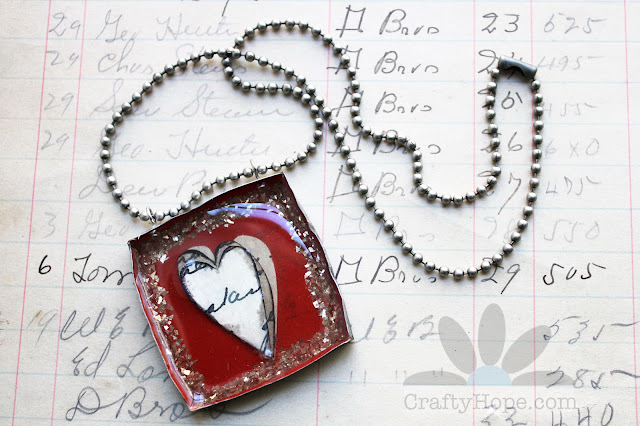 At least it was unexpected for me.

Before you start (continue) hopping to the other participants' contributions, I want to thank Jennifer for the amazing, inspiring theme as well as the team at Art Elements for allowing me to participate along with them. I needed this! Now, here's the list.

I hope you find some inspiration in this hop!
If you have any questions about either of my projects, please don't hesitate to let me know. I'd be happy to help.
Labels: art jewelry elements art journal challenge jewelry making mixed media necklace reveal upcycling
CraftyHope
I’m a jewelry-artist, treasure hunter, & nature-lover that finds joy in the smallest things. I hope to spread that joy and inspiration.