For earring inspiration this month for the We're All Ears Challenge, Erin (at Earrings Everyday) offered up the idea of using the names from a random name generator to help us generate ideas. She shared her own found list but also offered up a link if we wanted to stray from that path. I did play with the generator a little. However, I quickly discovered that the names it produced for me didn't inspire me quite as much as some of the ones on Erin's list.

In fact, as soon as I saw Erin's list, I was taken with the first one there: Obsidian Queen. Initially, it gave me a "Game of Thrones" vibe as obsidian is called Dragon Glass in the series, and there's a character who is the Queen of Dragons. I thought that was going to lead me down a rabbit hole of ideas, but I was mistaken. I still created a pair of earrings from the name, but they have little, if anything, to do with Game of Thrones. 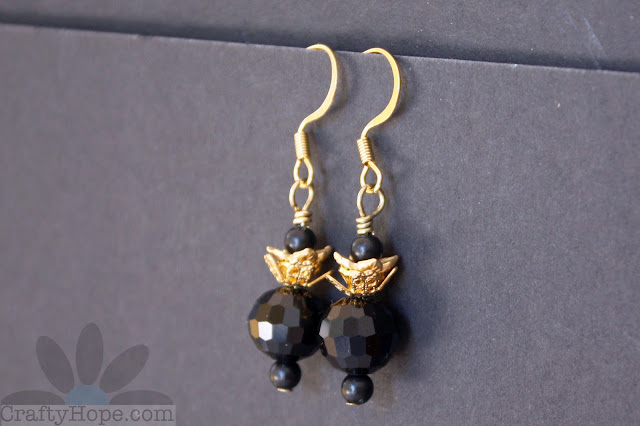 With Obsidian in the prompt, I knew I needed to work with black. And, I decided to stack several bead caps within one another to create the look of a crown. So...black + crown = Obsidian Queen. Done! 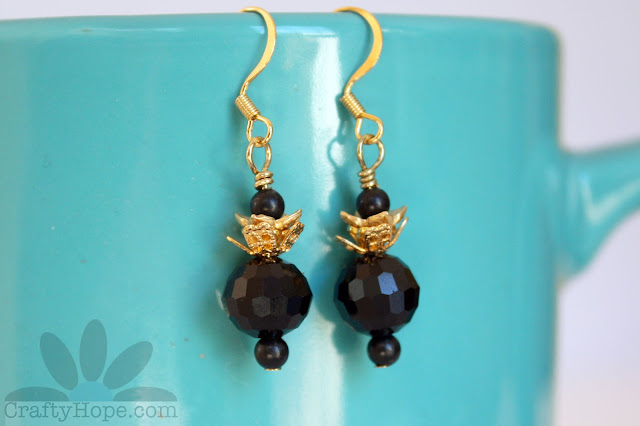 Once the idea for that first pair was in hand, I took a better look at all the other "random" names Erin had suggested and realized that most of them encouraged my muse. So, I wrote them all out, selected my favorites, and used a muffin tin to hold my materials while the inspiration was hot! After that, it took me no time to pull all of the pairs together. 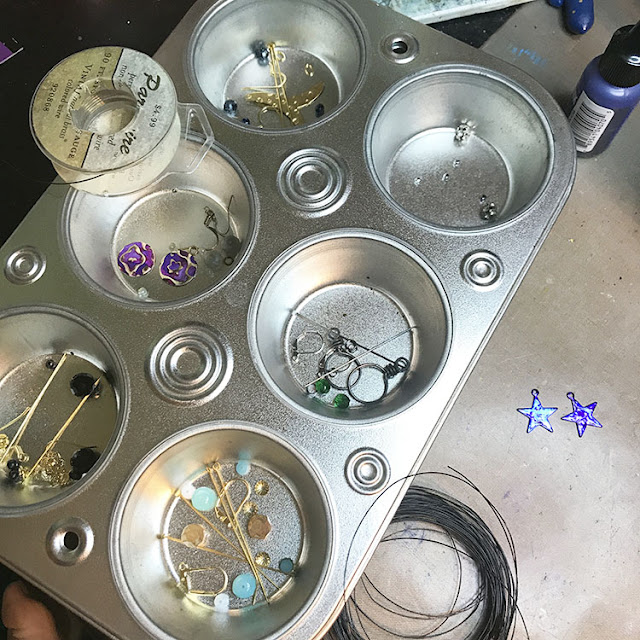 I next worked using the name "Violet Shadow" to make this pair of earrings. 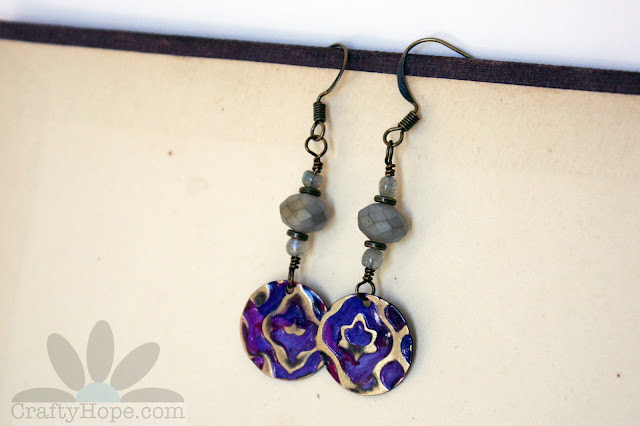 They incorporate some of the metal blanks I textured and colored the other week. They hang from a connector created with brass-colored wire, tiny labradorite beads, brass spacers, and faceted glass beads. 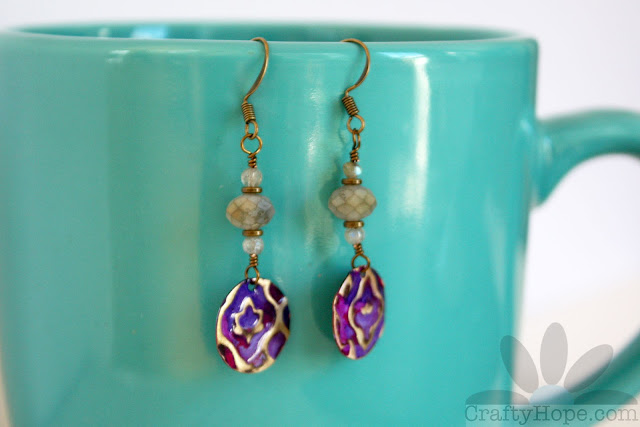 I love how the labradorite beads give a flash of color despite their gray "shadow" color.

Up next for me was "Golden Dusk." 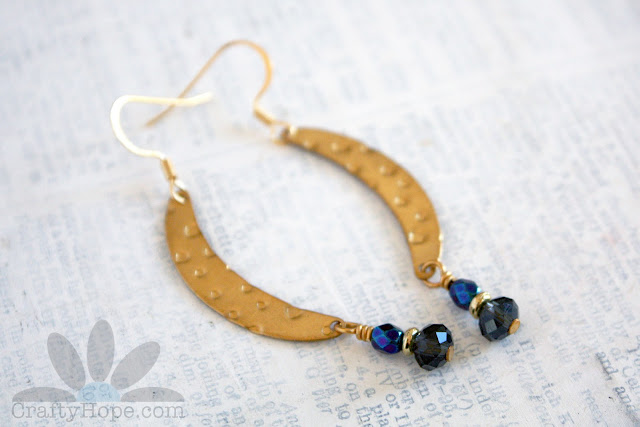 The crescent-shaped charms had also been run through my die-cut machine to give them texture. I really loved the bright, brassy, golden color so I refrained from coloring them.

Faceted glass beads in shades of blue hang from them to give them a touch of weight and indicate the darkening, dusk sky as the moon comes out. 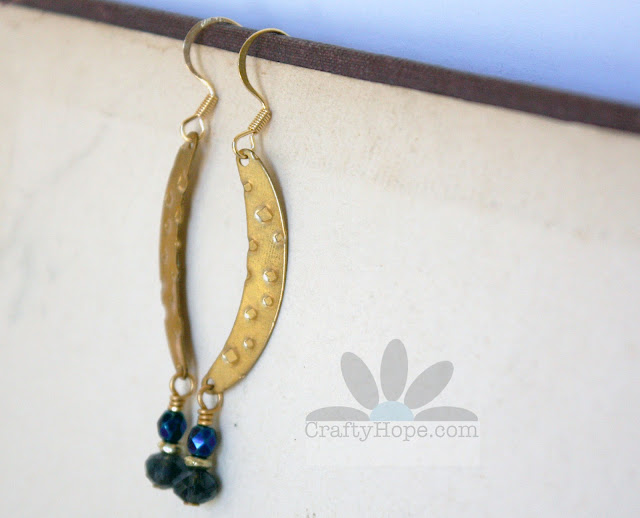 I couldn't help but place them so they face each other like waxing and waning crescents.

The name "Bronze Sea" struck me with inspiration like a bolt of lightning. 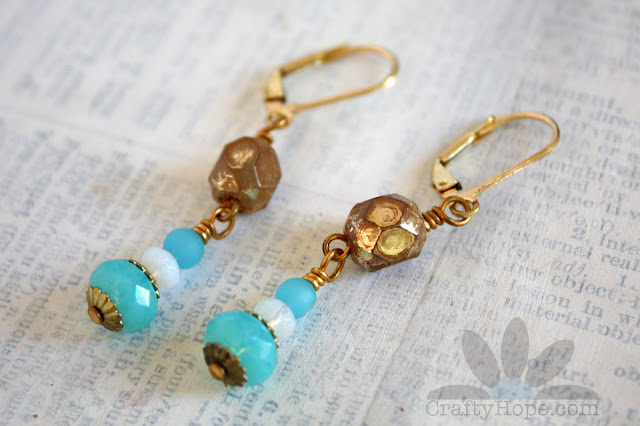 I knew I wanted colors that were reminiscent of waves crashing on a beach. So, I chose aqua blues and a white. However, the bronze was a little more difficult as I don't really have anything bronze-y in my stash. I did find some salvaged, worn gold glass beads that have a little of a bronze-like color to them. So, my stack of beachy beads hangs from them. 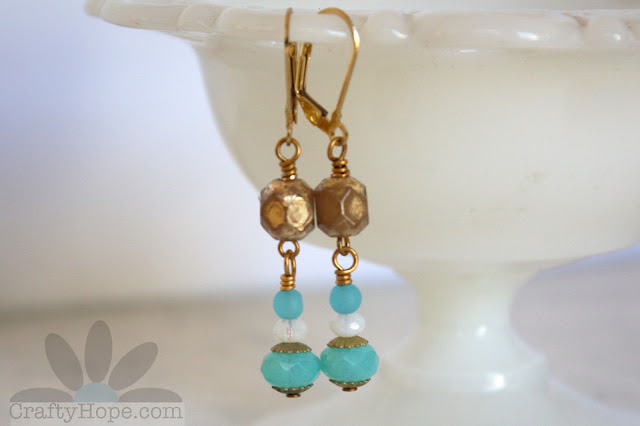 The above earrings felt like a breath of fresh air as so many of the names on Erin's list felt very dark with words like shadow, twilight, dusk, abyss, and darkness in them. However, I kept going! "Emerald Abyss" struck my fancy. There's something about the term abyss that makes me think of the depth of outer space and black holes. So, I made black hole rings. 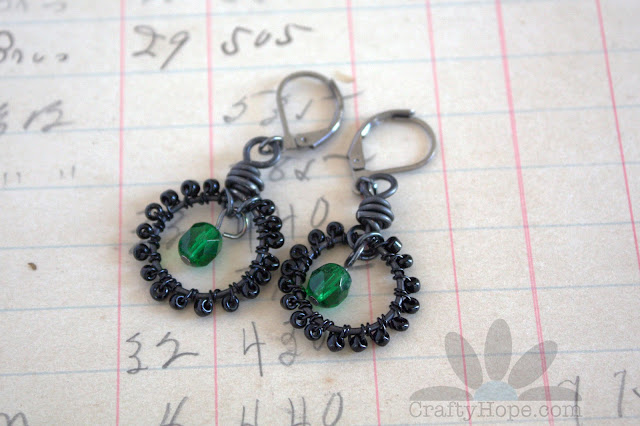 The rings were made with darkened steel wire and wrapped with black seed beads. An emerald-colored glass bead hangs into the abyss. 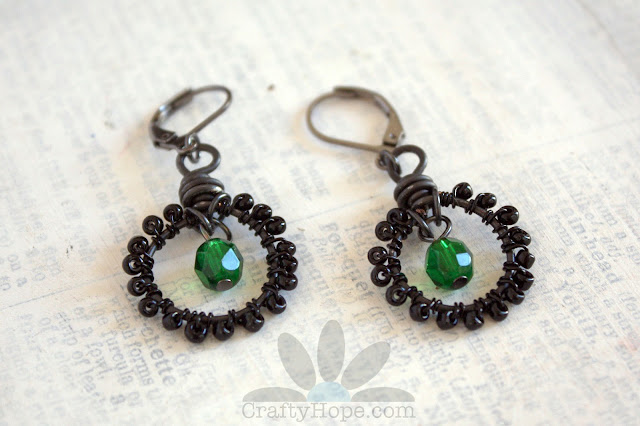 Since there were six compartments in my muffin tin, I went with one more random name: "Indigo Twilight." I can't believe I didn't start with this one or that I wasn't more inspired by it. Maybe my inspiration had run out after the previous five. In any case, I used indigo alcohol ink to color a couple of star charms. 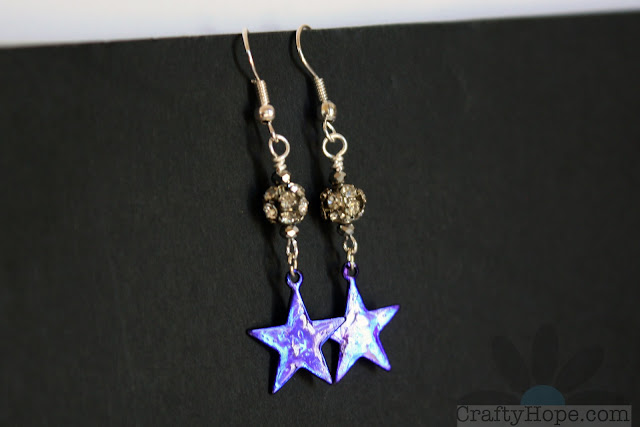 I found that putting the sealer in with a little dappling gave them a cool color-shift effect.

To play with the word twilight, I simply used rhinestones and small silvery glass beads to give the illusion of the stars coming out as the sun goes down. 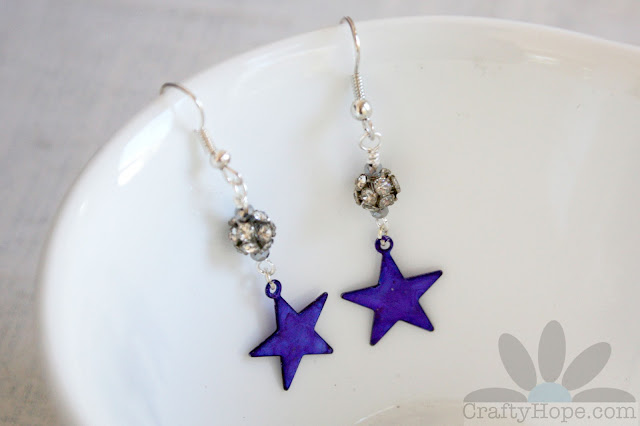 I'm really, super pleased with how inspired I was from the names Erin suggested. I love that they had colors in them - it helped get the ball rolling for me. I'm going to have to play around with that random name generator a little more to come up with my own! Thanks for the amazing inspiration once again, Erin. As for the rest of you, make sure to head over to the Earrings Everyday reveal page to see what Erin and the rest of the participants made with random names.
Labels: challenge earrings earrings everyday
CraftyHope
I’m a jewelry-artist, treasure hunter, & nature-lover that finds joy in the smallest things. I hope to spread that joy and inspiration.