Working on challenges each month has been the main source of inspiration for me lately. I've stayed so busy, that sometimes challenge pieces are the only jewelry I'm getting made. But, at least I'm staying creative. Each month, Sarajo of SJ Designs Jewelry has her husband issue her a visual inspiration. This is most often a picture he, Eric, has taken. She shares this picture on her blog each month to inspire anyone else who wants to play along and calls it the Honey Do List Challenge. I love the simplicity of this challenge and play along as often as I can, letting it push the limits of my ideas. This month was no exception. 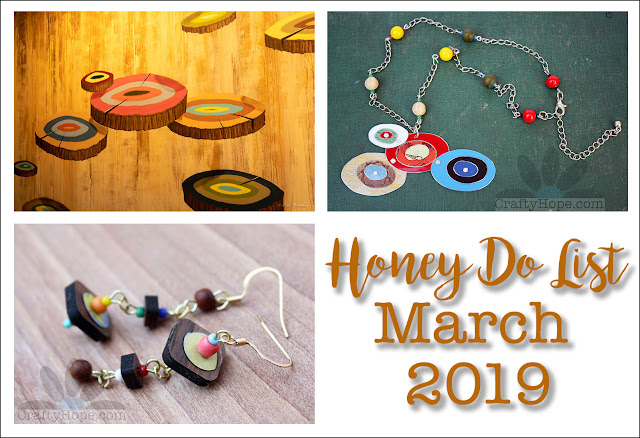 When I first saw the inspiration, I didn't realize it was a photo Eric had taken. I thought he was simply sharing a piece of artwork. However, on reading Sarajo's post, I found out that it's a section of a mural in a Portland Brewery. And, initially, I wasn't finding much inspiration despite all the color Eric made sure was in it. After looking at the photo a few more times and finally really studying it, inspiration struck! I went sorting through my tin. 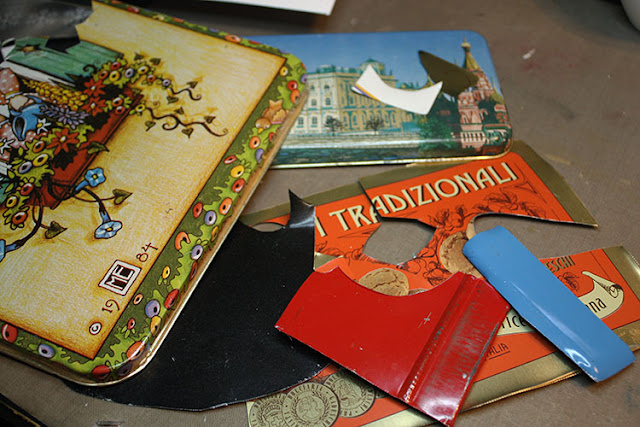 Like the inspiration photo, I wanted as many colors as I could find without repeating the same ones too many times.

From there, I created a stencil/template on my Cameo cutting machine. 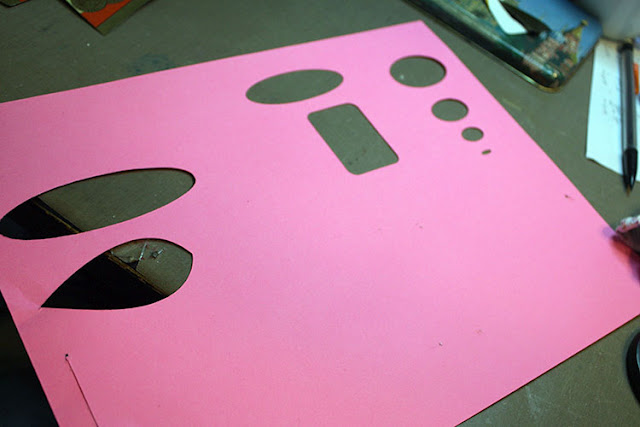 This was done on a basic piece of cardstock for its sturdiness.

Then, I got down to cutting the tin into layers of ovals. 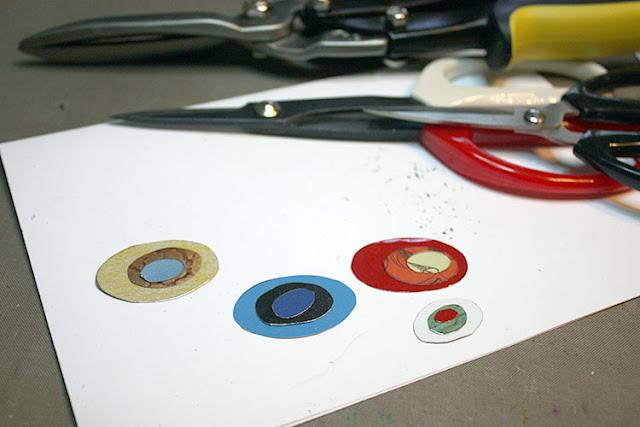 It took a little while to get the stacks of colors just the way I wanted. I didn't have the same colors as displayed in the photo, so I improvised.

The edges of the tin ovals were smoothed by filing and sanding. 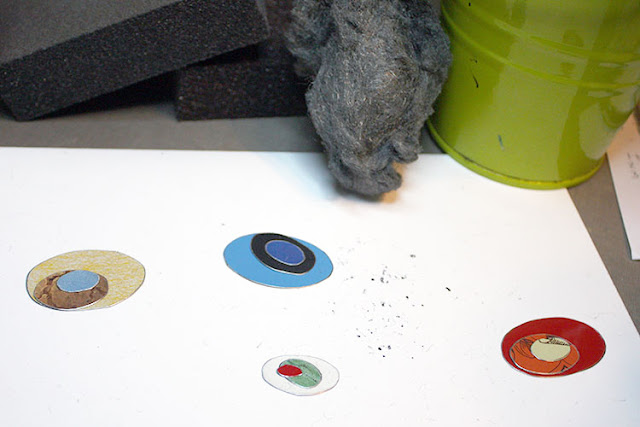 Holes were punched in what was estimated to be the center of each of the ovals. 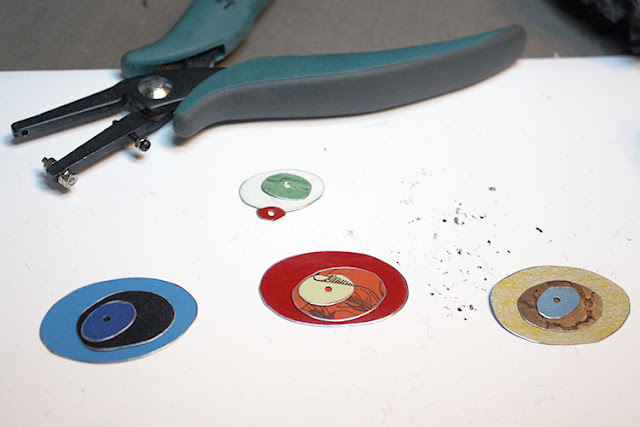 I didn't try to be exact, I still wanted them to feel somewhat organic.

After that, I riveted each of the stacks in place. 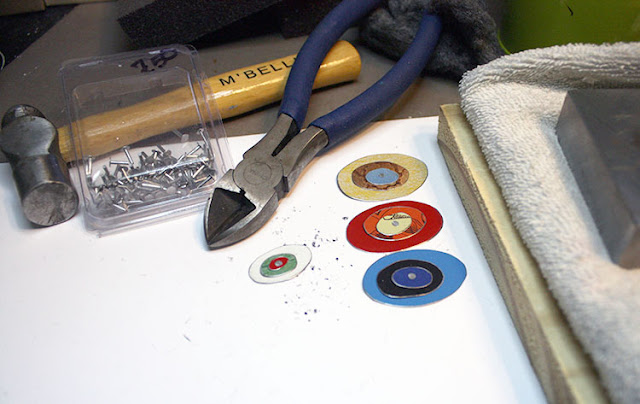 Then, the stacks were hole-punched and riveted to each other. 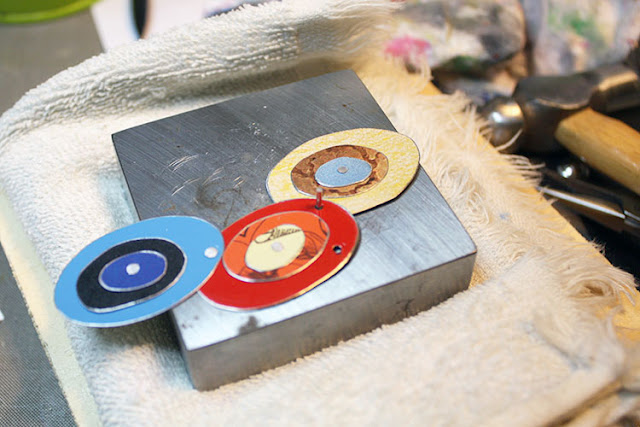 Initially, I had envisioned the two large oval stacks as the top of the pendant, but it just didn't look right to me. 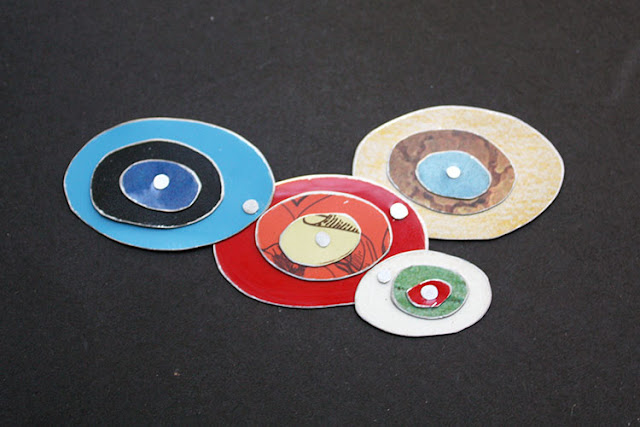 Mainly, this was because all I could see was a face. I wanted the piece to feel more abstract, so I turned the pendant upside down, more like what was in the inspiration.

For the chain, I stacked bright beads between links of a basic chain. However, I'm not happy at all with the chain. I was trying to use what I had on hand, but it didn't work. I'll likely be getting something different for it later this week. But I LOVE that pendant! 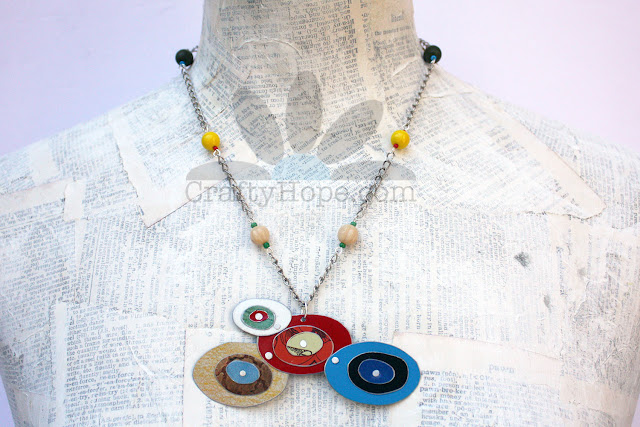 It echoes the inspiration picture so well. 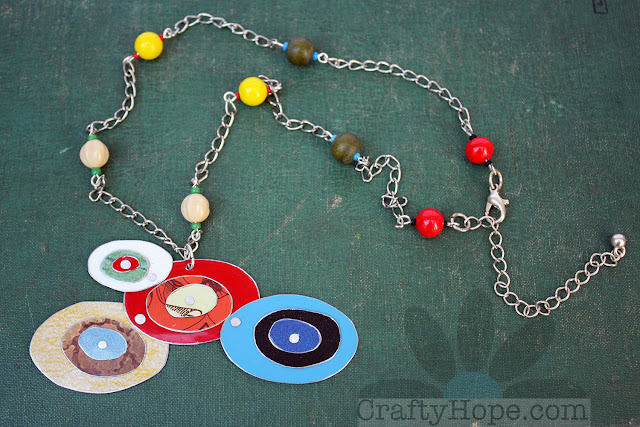 I thought this was all I was going to create, but I was wrong. I made a pair of earrings too. Somewhere between starting on the necklace and creating the earrings, I decided to try to find a picture and more information on the mural and its artist. I stumbled on this post about Murals in Breweries from Beer Advocate. What struck me most was that the mural by Nicky Kriara was inspired by a Portrait of Henry Fonda by artist Alvaro Tapia Hidalgo in the movie "Once Upon a Time in the West." So many artists were involved in getting to the point where Eric took the picture and then shared it with the rest of us to inspire our own art. It's a complete trickle down inspiration! It reminds me so much of the idea that there are no new ideas. Have you read Steal Like an Artist by Austin Kleon? You should! Oh, and how about this quote from the great Mark Twain:

“There is no such thing as a new idea. It is impossible. We simply take a lot of old ideas and put them into a sort of mental kaleidoscope. We give them a turn and they make new and curious combinations. We keep on turning and making new combinations indefinitely; but they are the same old pieces of colored glass that have been in use through all the ages.”

THAT'S what these challenges I keep participating in are. They're not my own new ideas, but my own combination of what I see through the artists' kaleidoscope. Something about this excites me greatly, and I had to share it with you.

Here are the earrings I made. 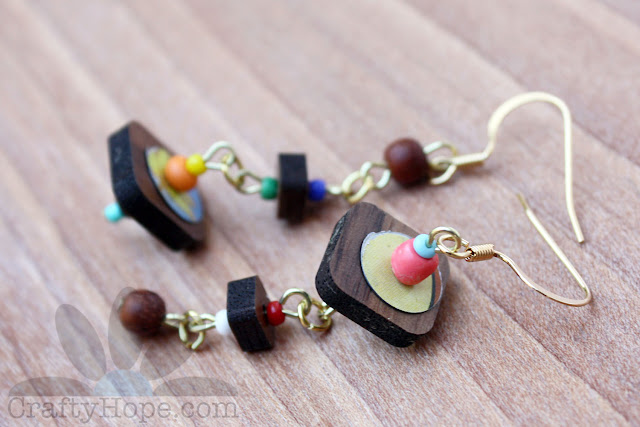 It bothered me that in the necklace design I wasn't able to include the wood-slices of the mural. I realized that I still had the laser cut beads that came with the wood connectors from Michelle Mach. They were perfect. Like the necklace, I tried not to repeat any colors, so the earrings are mismatched in more than one way. 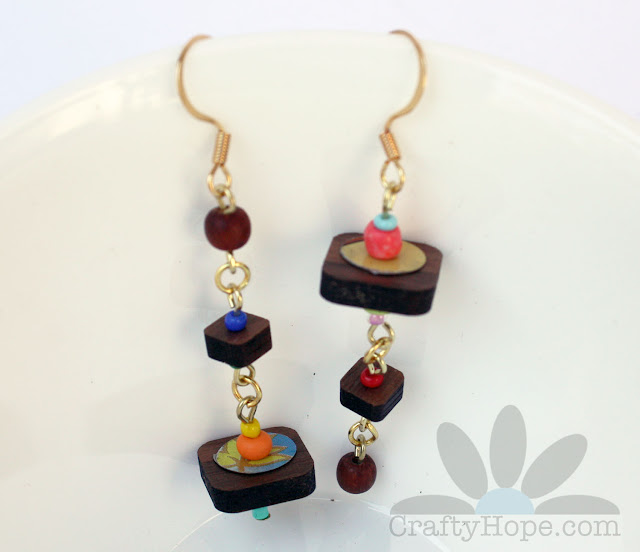 In one earring, the largest bead is at the top while it's at the bottom in the other. Tin was also included to sandwich the largest beat, but seed and e-beads were also incorporated to add more color. I used gold findings to give the warm glow that's seen in the background of the inspiration picture.

And, that's it for how a plethora of artists inspired me to create two pieces of jewelry. Thank you to Sarajo and Eric for sharing the inspiration, and to all the other artists out there who are working to twist their kaleidoscope into something amazing! Make sure to head over to SJ Designs Jewelry to see what else was created for this challenge.
Labels: art challenge inspiration reveal
CraftyHope
I’m a jewelry-artist, treasure hunter, & nature-lover that finds joy in the smallest things. I hope to spread that joy and inspiration.