The inspiration photo for Sarajo's Honey Do List for October includes a plethora of elements that could be inspiring. I made my own list of what stood out to me as I looked at the clock from the Czech Republic. It included clock/clock hands, gilded gold, bright blue, stars, and constellations. In the end, I made two pieces - one that worked out well, and one with which I'm not as pleased. I'll start with the more successful of the two. 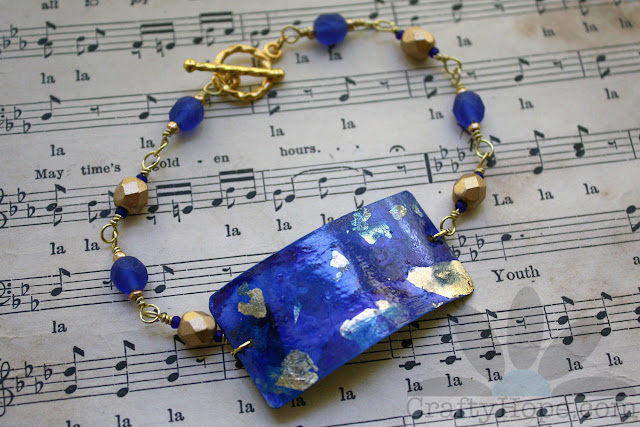 The bright blue with touches of gold on the clock stood out to me. I don't know if it was because it was the main pop of color in the picture or the fact that blue and gold were my high school colors. 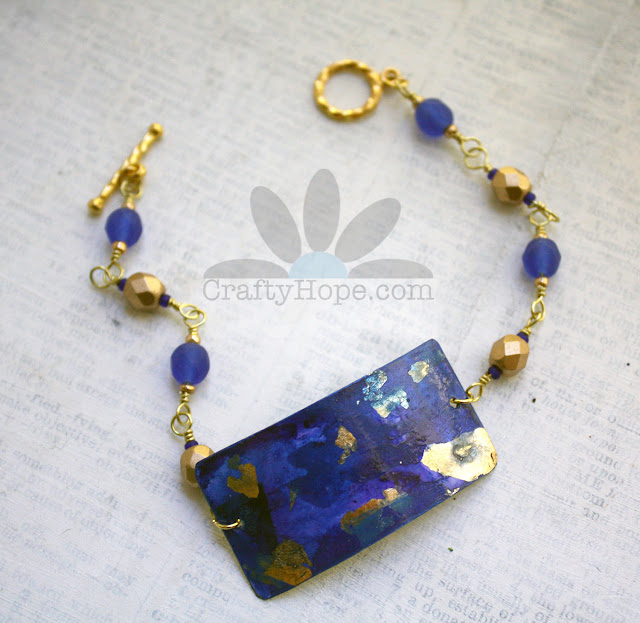 To make the bracelet, I snipped a piece of cookie tin into a rectangle, filed down the sharp edges, and punched holes on the ends. I used several shades of blue Vintaj Patina and Ranger Alcohol Ink then added Gold Foil to alter the top of the tin. Once the tin was sealed, I curved it to fit comfortably. 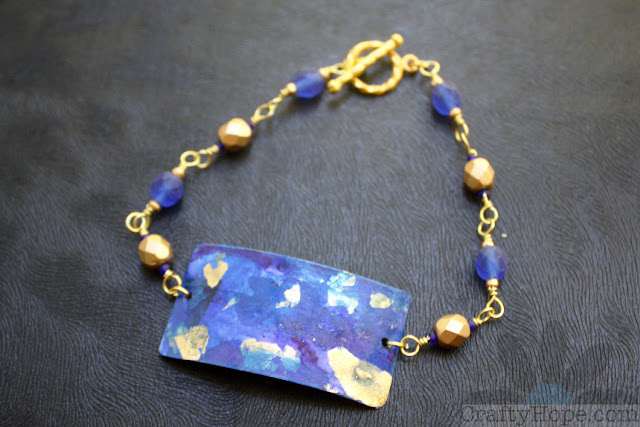 It was lucky that I had both gold and cobalt blue faceted glass beads of the same size in my stash. I sandwiched the larger beads between seed beads and wire-wrapped them together with gold-tone wire to make a chain for the bracelet. 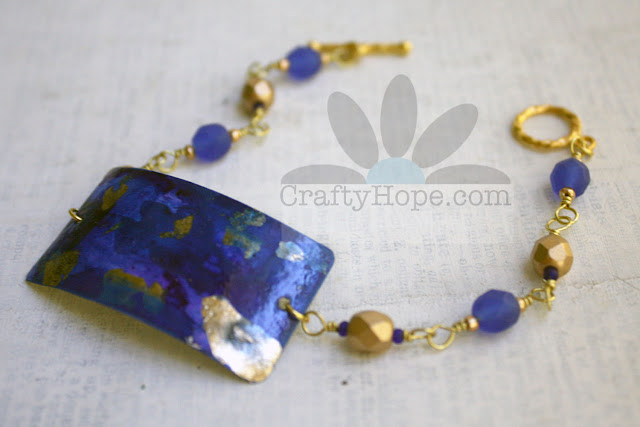 It doesn't have the stars that I originally envisioned as part of this piece, but I think it worked out just fine this way.

Now, for the first piece I created. 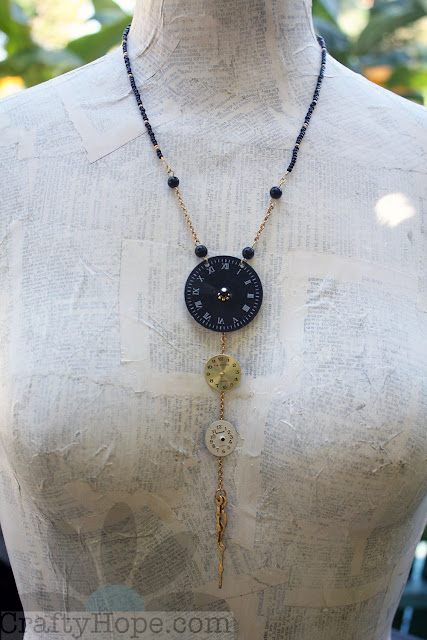 I've long been a collector of old jewelry and watches. As I shared yesterday, I pulled out my stash of watch parts to help inspire me for this challenge. 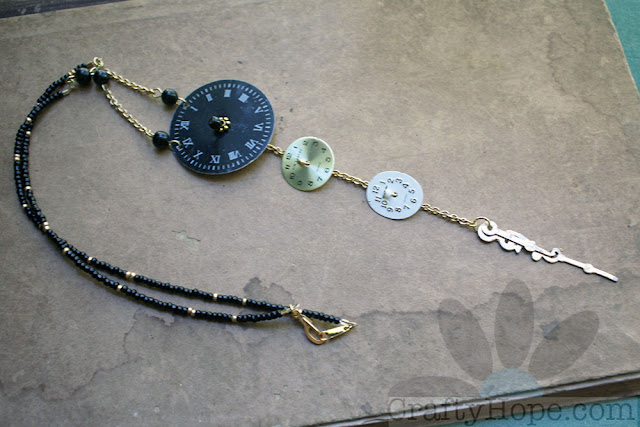 I ended up selecting three watch faces (two from old watches, one reproduction) and a pair of reproduction clock hands to create the focal for this necklace. I did alter the clock hands with gold leaf to give them more of the gilded gold look that's in the inspiration photo. My attempt with the gold foil did not achieve the sublime-ness of the original at all. 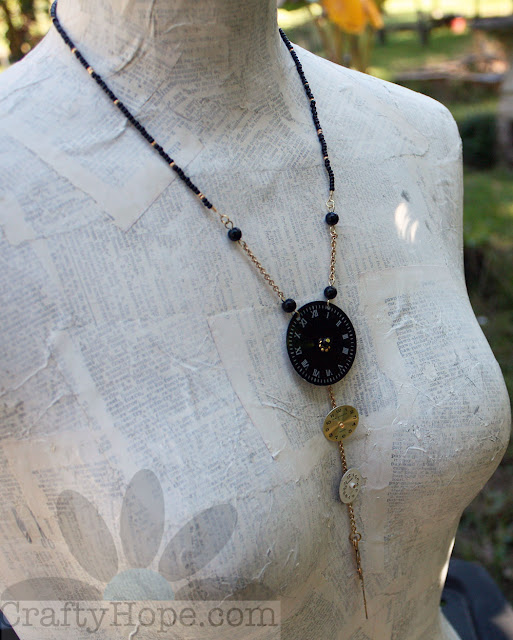 While I initially liked the idea of the three watch faces, they just don't hang right. The faces turn - both around on the headpins that attach them to the chain and backward so the backside of the watch shows. It's just not as stable as I'd like. 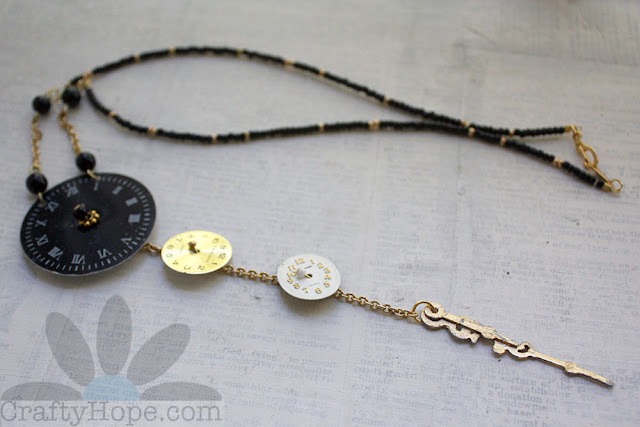 I enjoyed playing with the idea of using the clock faces this way, but it needs some work. I'm not in love with it. And, I've decided that if I don't love something - I don't have to keep it. It's been hard to come to that realization, but it's necessary. So, this necklace will be dismantled. I could probably alter the way the vintage watch parts hang to ensure that they don't move so much, but since the design isn't singing for me - I'm not sure it's worth the effort.

I absolutely appreciate the inspiration from Sarajo and Eric. I was able to play with some of my treasures, even if one of the designs didn't work. I did get one beautiful bracelet out of the bunch. And, I hope that I've helped other artists realize that just because you make something, doesn't mean that that's its final form. YOU get to decide if it works.

Now, head over to SJ Designs Jewelry to see her reveal and that of the others who ran with the inspiration photo.