It was a year ago when I packed up my first bead box to keep me busy while I waited at the hospital. Since then, I've found that having the box stocked with already thought-out designs is perfect for traveling and for days when I'm uninspired. This is the fourth time I've made it through the box, and I don't see the trend of re-stocking it ending anytime soon. 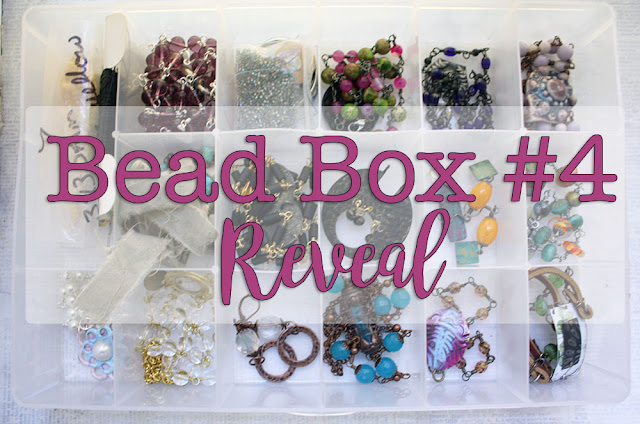 You can see the other stocked boxes and reveals by clicking the links below.
Bead Box 1 - Stocked
Bead Box 1 - Reveal

When the box was re-stocked last time, I simply carried over a few of the designs I didn't finish from the previous box. Those were the first several pieces added so they're the first ones pictured below. I have to admit that some of those are still not complete. In fact, there are several unfinished pieces in this reveal. Though, the reasons that they are not finished varies by the piece. (You should be able to click on the pictures to open a larger view of them.)

This first design was one of the transferred-over-but-not-completed ones. I never even touched it except to take the photos. That's a real shame. It may end up in the next box, we'll see.

Here's another design that had been in the previous box. It didn't take much to wrap and connect the glass beads then add a clasp to complete this long necklace.

Again, I didn't touch this one. It will likely never be completed because I'm just not interested in it. So, I'll probably just cut the beads off the ring I started and be done with thinking about it.

I was able to complete this azalea-inspired necklace easily. But, I'm just not happy with its design.  Don't you hate that? There's just nothing to be done. Not everything works out every time.

This Buddha necklace was made for my niece, and I'll likely give it to her tomorrow. It's another simple design, but as she's a girl that doesn't like a lot of frills, it will suit her.

Here's the last of the elements that were left over from the previous box. And, it's one I'm actually really pleased with. Two of the bead types that I initially picked out for the design were never worked into the finished piece. I felt that including them would make the necklace too fussy. And, that's not something I want in my jewelry.

I adore how this fabric tassel necklace turned out. Its simplicity and natural elements speak to me.

Yes, I have a thing for long necklaces.  All this particular design really needed was a few bead dangles and a chain. I kept the palette simple.

Many of the focal pieces for the designs in this box came from my experiments during The 100 Day Project. This pendant was one of them. It had initially been an earring (I think) that I punched a hole out of the center of, added small holes, and accented with tube rivets. Once I began to try to work the pendant into a completed piece of jewelry, I realized that I just didn't like it. So, I stopped wasting my time.

These two projects were the easiest of the bunch and took me no time. It was really nice to have them in the middle of the box as a bit of a breather after struggling with some of the others.

There was a tiny bit of a struggle with this bracelet as I realized that some of the enamel had chipped off the orange filigree bead originally chosen to be included. Since I was trying hard to include art beads in this bracelet, I wasn't sure where to turn as I needed another pop of orange in it. Thankfully, I discovered a small stash of some polymer clay beads I made years and years ago. There was an orange one that worked perfectly to finish the bracelet.

Ah, another unfinished project...This was another case of me deciding I didn't like the pendant after all. For this one, it just felt juvenile, and I couldn't imagine a grown woman wearing it. What was the point after that?

Thank heavens for earrings that just seem to fall together! I really did plan this one out well as everything I needed to make these copper beauties was right in its compartment. Hurray!

I didn't think this one out as thoroughly, but it still came together well once I added a little copper chain and a handmade hook clasp.

I'm still not sure about this bracelet. I like the bracelet bar I made but just could not find anything that would work well with it. So, I opted for simple brown Czech glass beads, figuring a neutral would work. I don't know... What do you think?

I think one of the reasons it took me so long to "finish" this box was because I just wasn't sure about my choices for this altered tin bracelet bar. Originally, I had just those green Czech glass and brass beads. But, I knew it needed more than that. Finally, I made myself sit and think not just about the beads that I had picked out, but what I really thought would be best with the bar. I finally landed on the idea of leather. The picture doesn't show it well, but this turned out to be a pretty sweet bracelet.

So, that's Bead Box 4. Now it's time to re-stock that baby and pray that both stocking it and finishing it are less of a struggle than in the past. How do you plan ahead for projects?
Labels: bead box reveal
CraftyHope
I’m a jewelry-artist, treasure hunter, & nature-lover that finds joy in the smallest things. I hope to spread that joy and inspiration.