This week was all about knocking things off my list. There was so much packed into the week, I can't believe that I even remembered to take a few pictures. 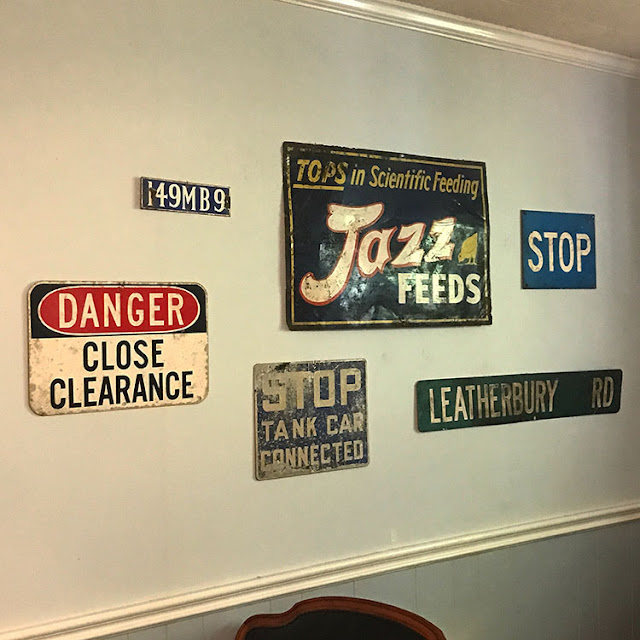 First up was a project that has been long in waiting. When we moved to Silverlox, we found this abundance of old signs on the property (mostly in the pole barn) and wanted to hang them in the house.

To get the arrangement just right, I cut the shapes from kraft paper and used masking tape to move them around until they were just right. 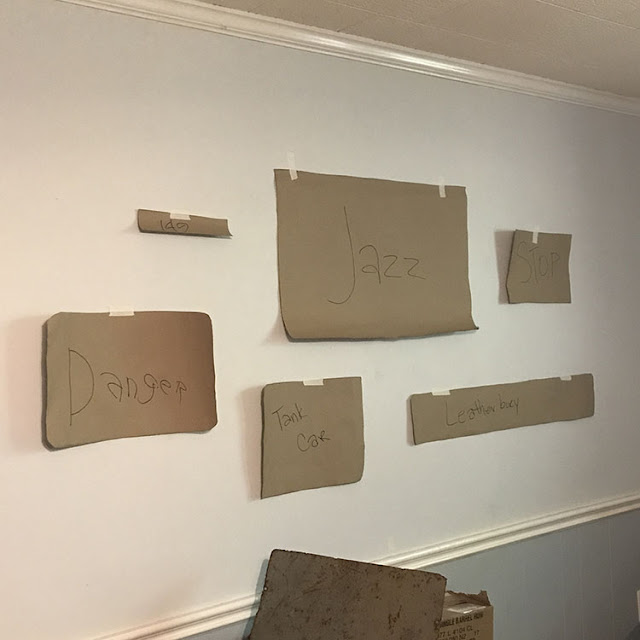 Pat then helped me get them up on the wall.

As if that wasn't checking off enough boxes, I dove into another long await task - purging my bead cabinet. 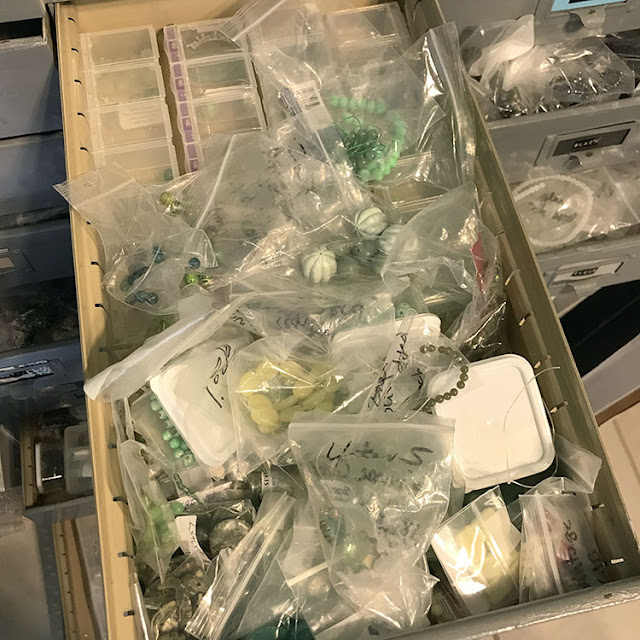 Many of the drawers looked a lot like this one, overloaded with baggies and so packed that it was difficult to even know what I have. 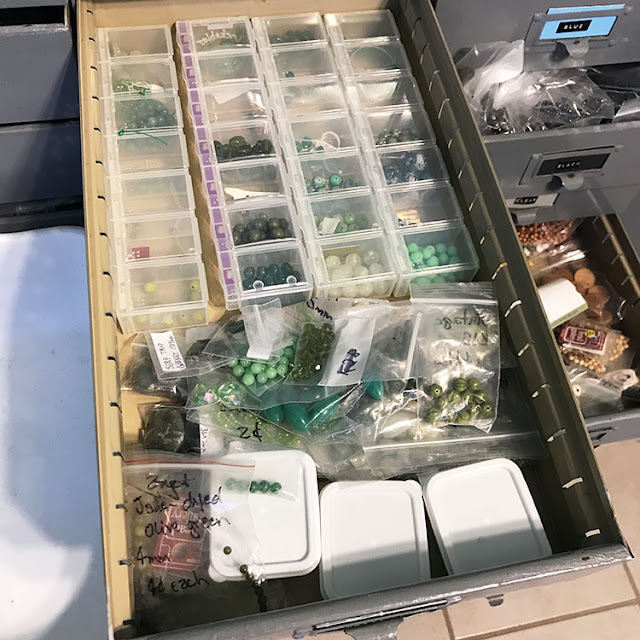 I took it drawer by drawer, deciding what I wanted to keep and what I thought I'd never use. This project took several days as I would do a few drawers until I got frustrated then switch to another task. All the bead drawers have now been tackled, next up are the findings drawers. Eek!

There was also a little work done on the Earrings Everyday projects on Sunday, but much of that continued into Monday and beyond as I uncovered items in my purge. 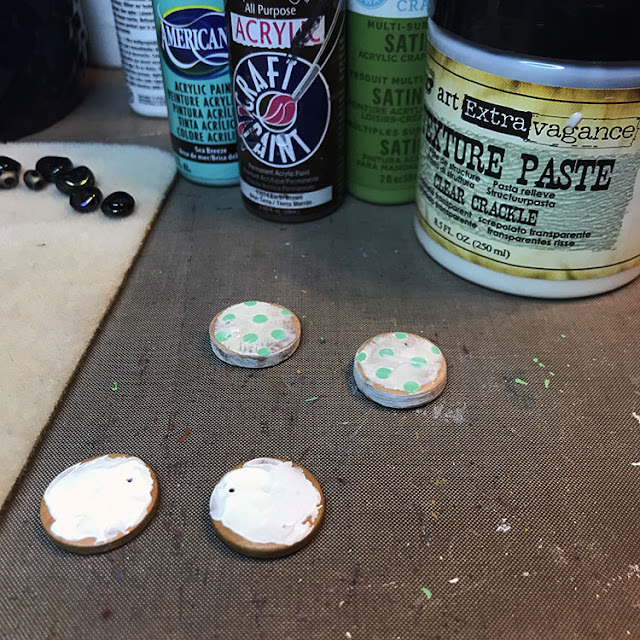 I played with these wood discs and various media on Monday. The white crackle ones didn't turn out as I had hoped.

While these "cured", I ran out to spruce up the CraftyHope Booth at Southern Antiques and Accents before Ladies Night on Tuesday. 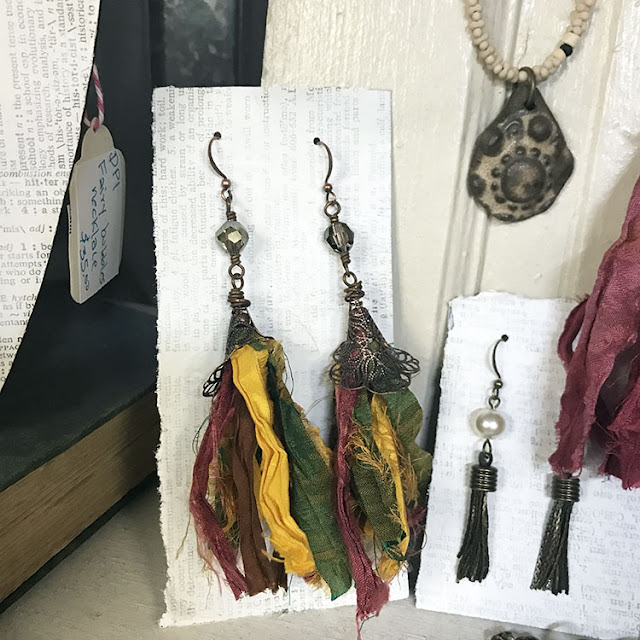 Tuesday was all about running the errands that had been avoided on Monday, like grocery shopping. 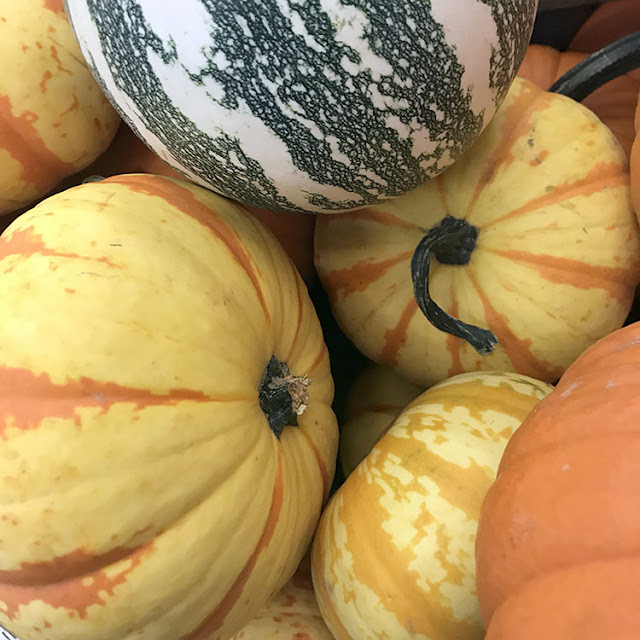 You know that Fall is on its way when the Farm market starts displaying the pumpkins!

With all my running around on Tuesday, I knew I wanted dinner to be easy. 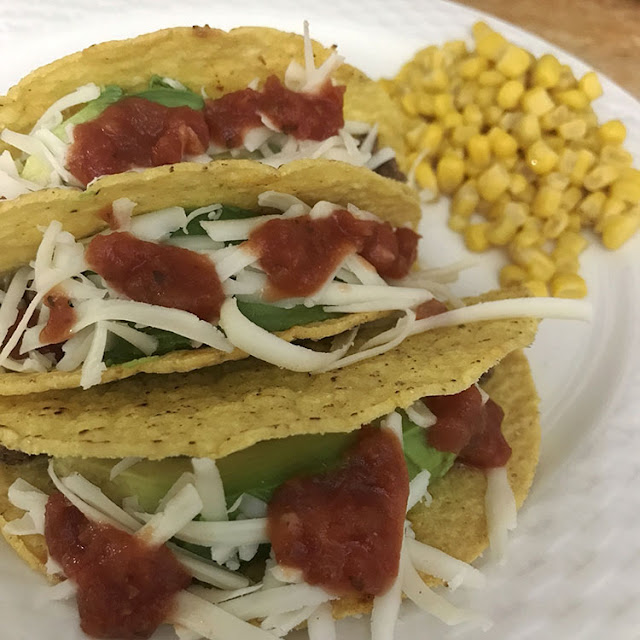 Taco Tuesday was the perfect answer!

As usual, Wednesday was spent with my grandmother. I made sure to work from my bead box to get a few things made. 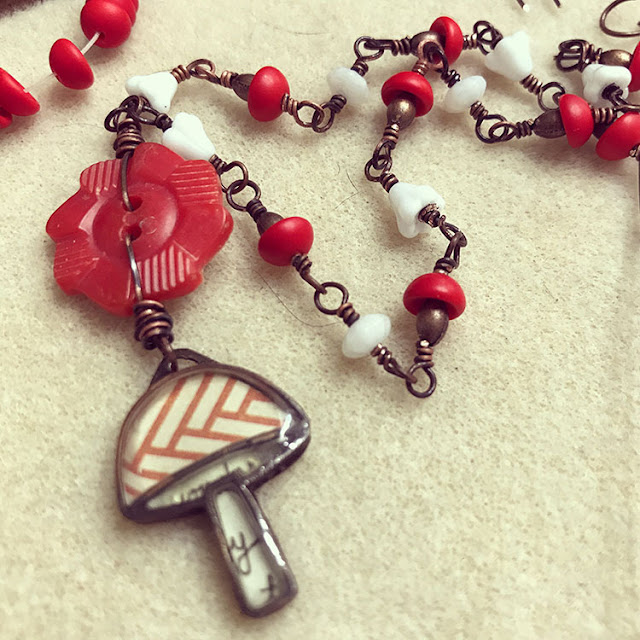 I'm loving the little mushrooms I incorporated in the chain of this necklace.

It wasn't any old Wednesday either...It was my grandmother's birthday! 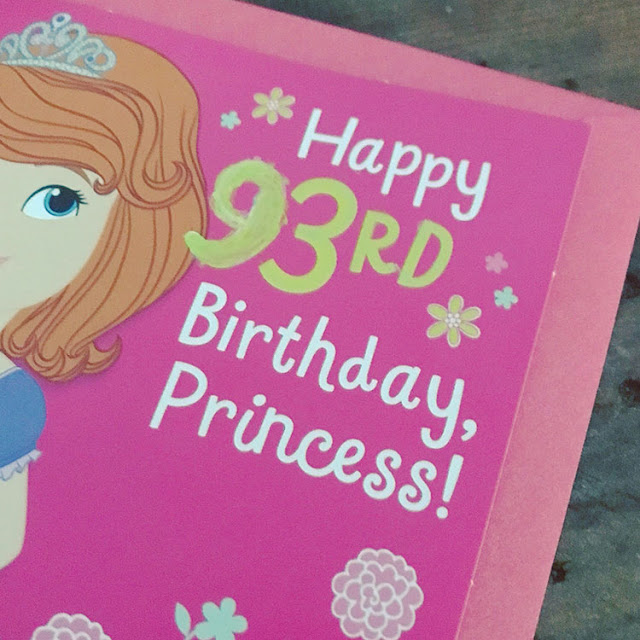 When I shopped for cards, I was disappointed in the selection for grandma cards and the funny cards were almost mean. So, I altered this card for a 3-year-old to suit my needs. 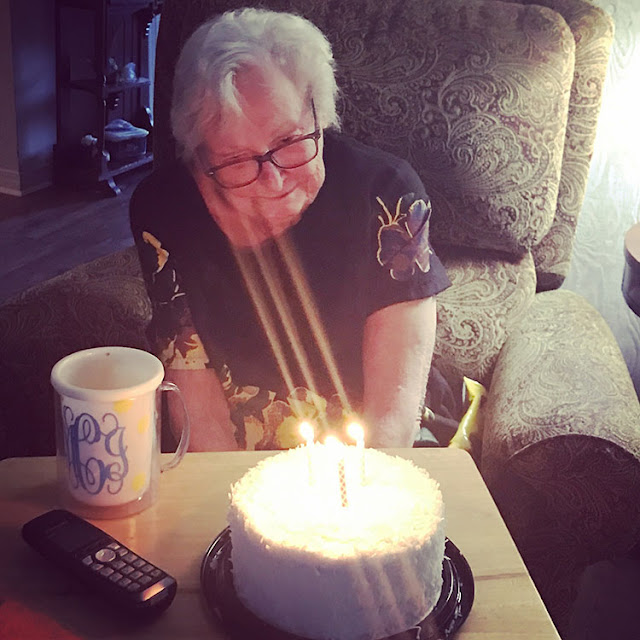 We had family over to join in the celebration. And, I think she really enjoyed her day.

Thursday was much more low-key as I checked things off my list, like finishing challenge pieces and taking pictures. I did take time to go outside and noticed a pop of color across the yard. 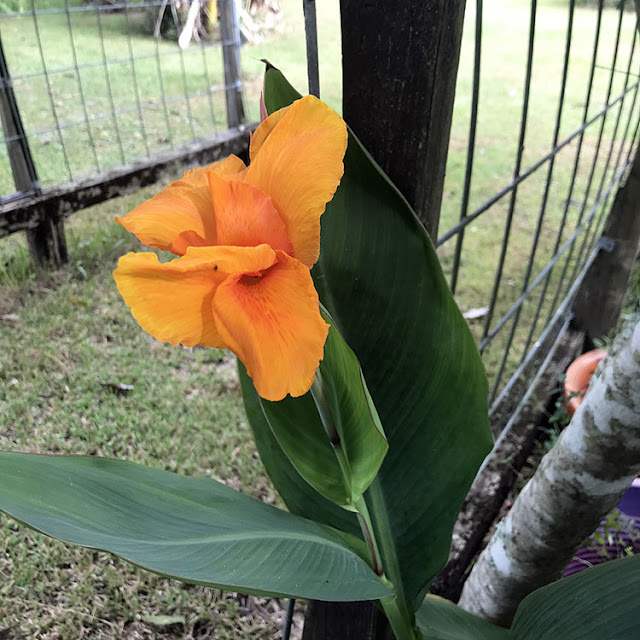 This bloom brightened my day.

Friday surprised us with lower temperatures that actually felt a little like Fall. 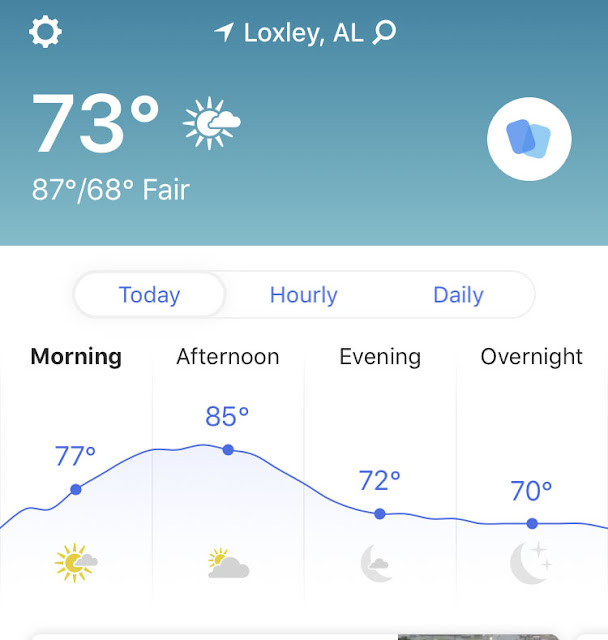 Granted, it didn't stay that way...

I spent most of the morning knocking out my major housework and caught these two having some kind of secret meeting. (Pardon the dog snot on the glass door. She makes it impossible to keep them clean.) 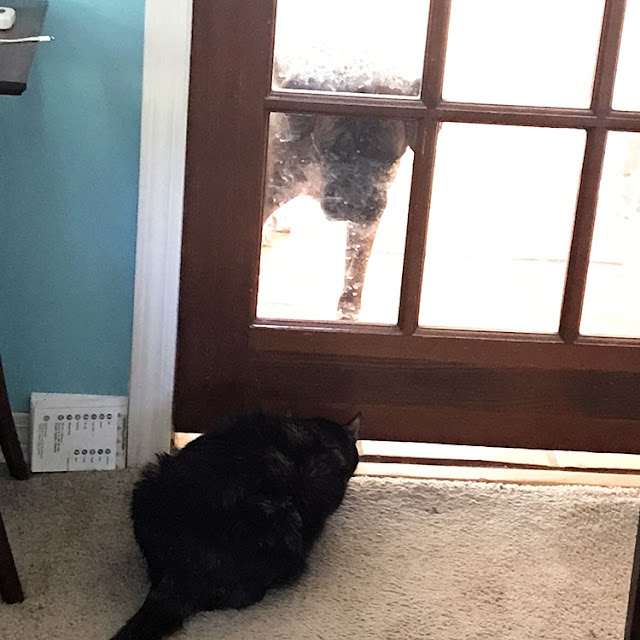 I'm still not sure what was up with this meeting of the minds.

Once the chores were out of the way, I could art! 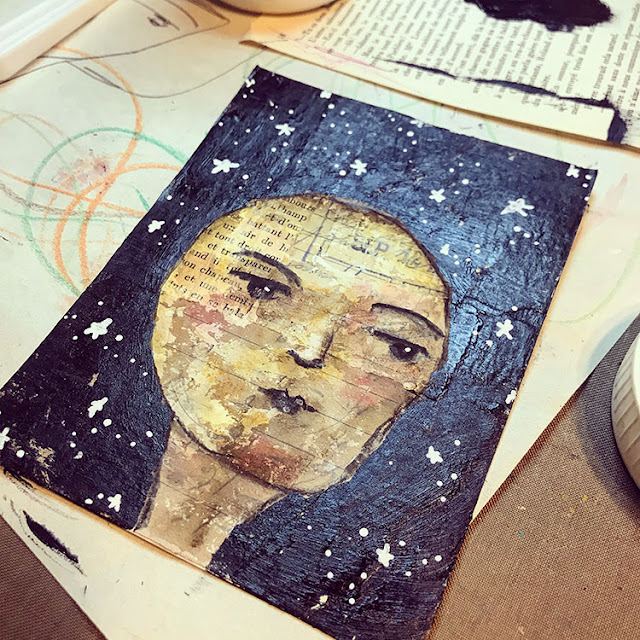 I was actually just trying to knock another challenge off my list. You'll see what becomes of her later in the month.

That evening, I got the news that my mom had fallen and broken her arm. As such, I'm not really sure what my week ahead holds. Since I knew my nieces and step-father and there with her this weekend, I held off going over there for the time being.

After Saturday's early Alabama football game, I took a few pictures before heading out to the pool to do a little more artwork in the shade, where it feels ALMOST like fall. 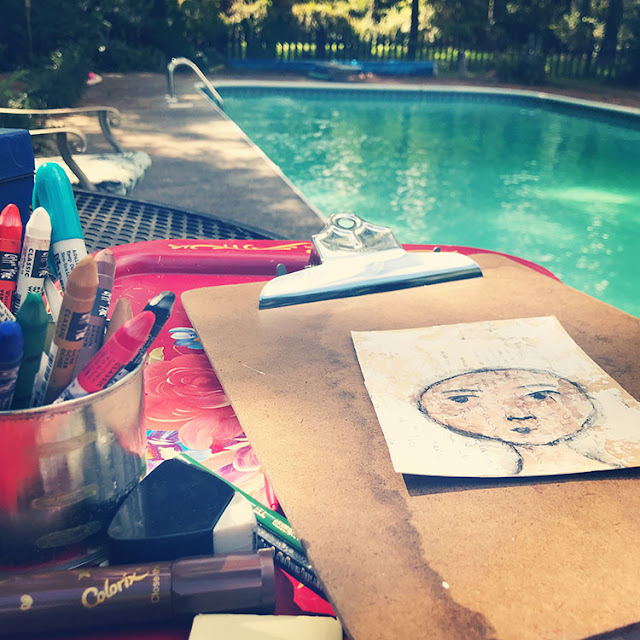 I even had an Indian Turkey Chili in the crockpot so I didn't have to worry too much about dinner. And, that's how I ended the week.

Let me share some of the links I found inspiring this week.
Tomorrow is the first "official" day of Fall, but that just means that we're got another month or two of warm weather. Sigh. But, I can pretend it feels like Fall with a couple of fall-themed crafts (coming soon!) How are you going to enjoy the beginning of the season?