Faerie as the prompt for any art medium really leaves the world open to the imagination as there are so many incarnations of them. That was the challenge issued by Caroline of the team at Art Elements this month. I've long loved the world of magic and the mythical realm and was so overwhelmed by the possibilities even within the boundary of fairyland that I didn't quite know where to begin. 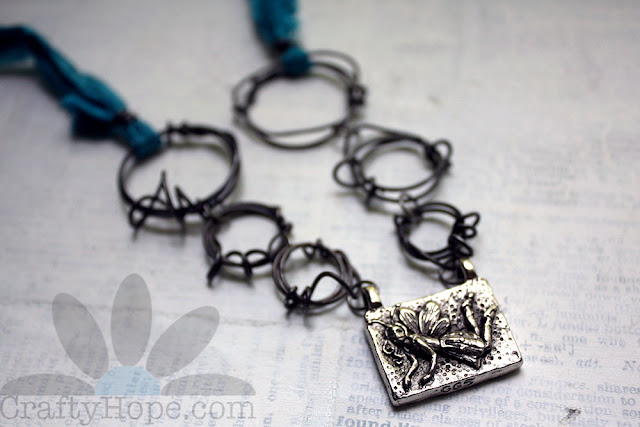 While on a bit of a shopping excursion this week, I happened upon the Green Girl Studios display at Hobby Lobby. The pewter pixie pendant there called out to me and came home with me as a starting point. However, I was still stumped as to what to do with her, so I let my mind wander. 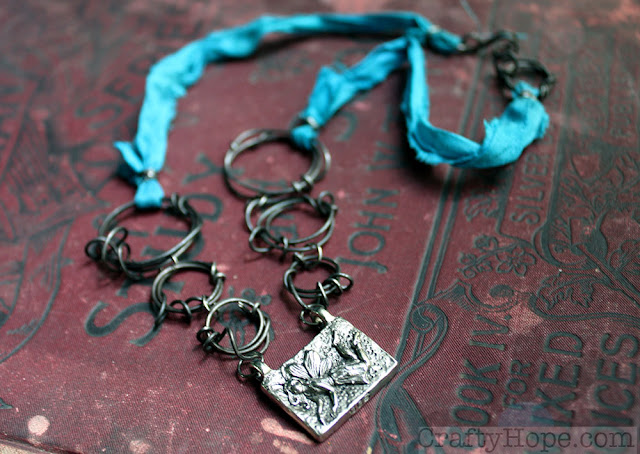 The pixie depicted on the pendant seemed to be floating in mid-air; and fairies, in general, have an ethereal quality. With that in mind, I didn't want there to be much fuss to the piece I created. I never even pulled out a single bead. Instead, I was drawn to my blackened steel wire and compelled to make bubbles. 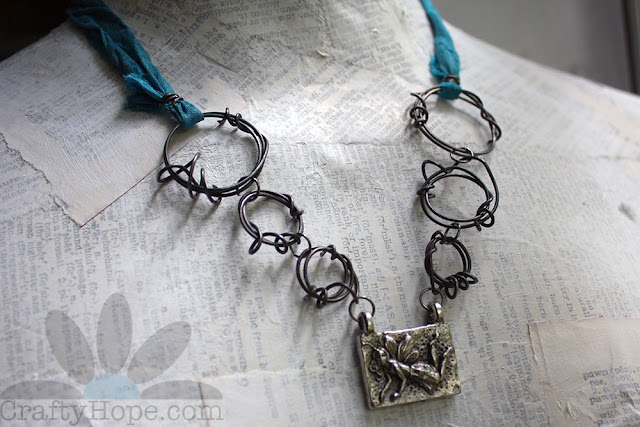 At first, I thought I would just make one or two of the bubbles but after the first, I knew that these messy swirls of magic would be the main element to my design. I used only a glue stick and a tapered paintbrush to help form the shape of the circles, then wrapped them haphazardly to finish them. Gunmetal jump rings link them together. 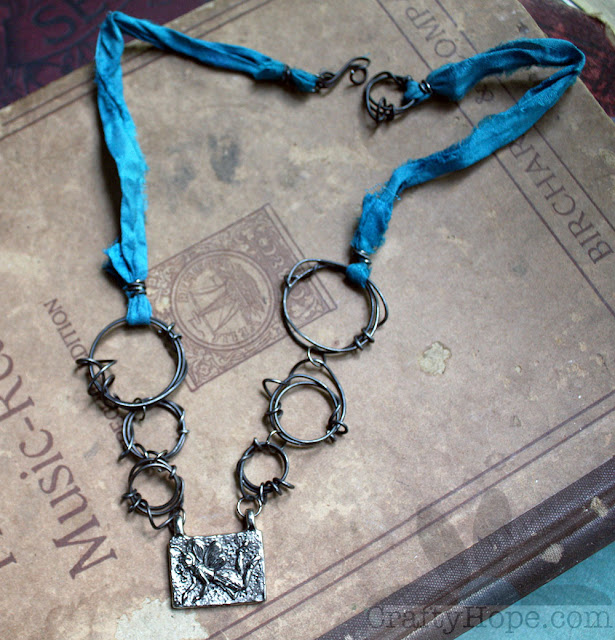 To complete the necklace and give it some softness, I used recycled sari silk in a dreamy teal blue. As well, I created my own hook and loop closure with more of the blackened steel. 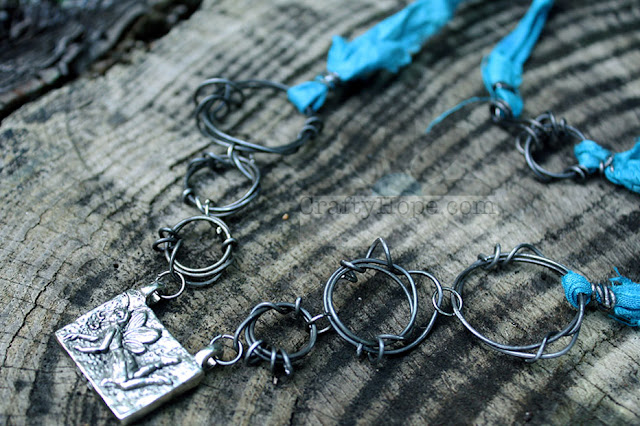 The swirly, messy circles definitely keep the necklace feeling light while exuding a sense of magic bubbles floating to the sky of blue silk. I'm still amazed at how quickly and perfectly this necklace came together. It had to have been magic.

Once the necklace was done, I was still itching to create with the theme. I've always had a thing for fairies. In fact, for a while, I had a second blog (now closed) that I called Fairy Creative. There are at least three fairies, in some form, in my bedroom. And, I shared my process for creating Fairy-themed Altered Playing Cards some months ago. So, I knew that the possibilities for coming up with another design were there. However, I wanted to make something that wasn't jewelry. It didn't take long for this beauty to emerge. 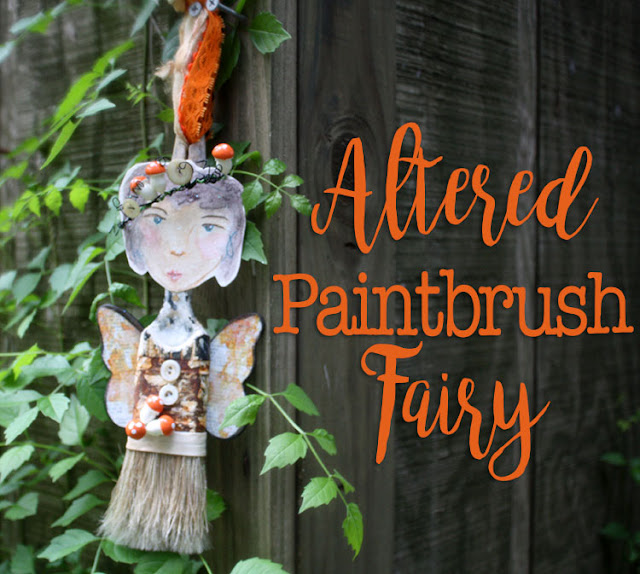 Without any direction, I dug through a box of elements for mixed media art and pulled out a few materials that I thought would work with the theme. 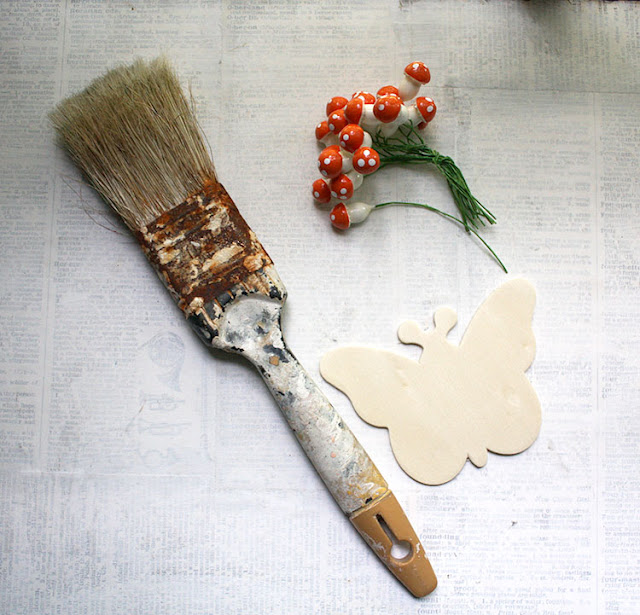 The little mushrooms caught my eye first followed by the Dollar Tree wood butterfly form. When I spotted the paintbrush, the whole idea came into focus. I've long seen altered paintbrushes in mixed media art circles, and have been wanting to make my own. This was the perfect opportunity. 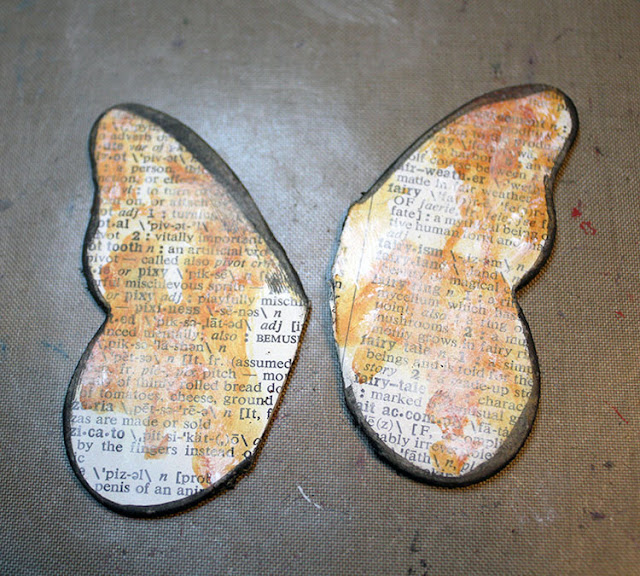 Using basic scissors, the wood butterfly was cut in half, and the butterfly's center was snipped away. The remaining wings were painted with a layer of black gesso before I added my trademark dictionary text with Mod Podge. If you look closely, you'll see that the definitions for pixie and fairy are included on the wings. The paper was toned down with a whitewash of acrylic paint and water. To echo the rust on the paintbrush, I added splotches of quinacridone/nickel azo gold fluid acrylic paint. To define the shape of the wings, I used a black Faber-Castell Pitt Pen to outline them. These were sealed with more Mod Modge. 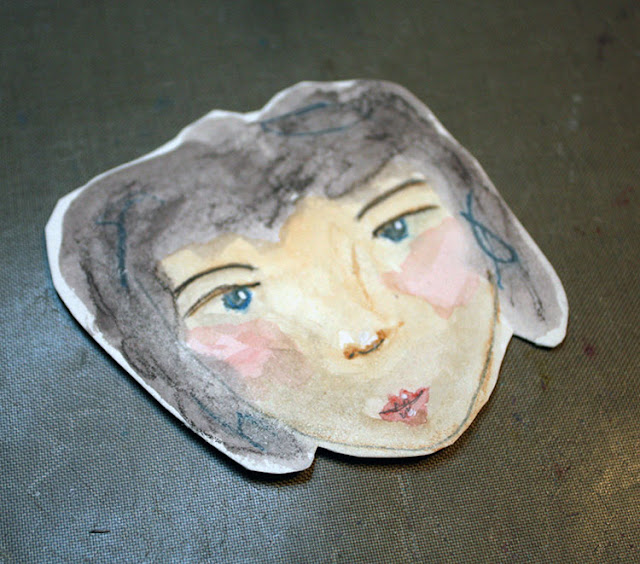 Creating a face for my paintbrush fairy baffled me for a bit. I sorted through more of my mixed media assemblage elements for something that would work. In the end, as you can see, I decided to create my own face on watercolor paper with Derwent Inktense Watercolor Pencils. This was also sealed with Mod Podge on the front and back. 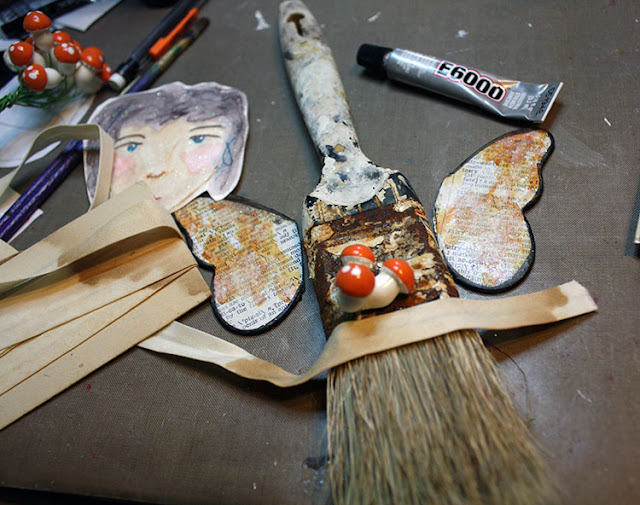 Then it was time to assemble her. I did add a touch of fine glitter to the wings and face to evoke the magical quality of a fairy. The mushrooms, thrifted seam binding, and buttons (not pictured) were added to the mix. Everything was glued on with E6000.

Once most of the elements were added, I decided she needed a crown of some sort, so I created one with more of the blackened steel wire I had used in the necklace along with the mushrooms, mother of pearl buttons, and black craft wire.

As well, lace, seam binding, ricrac, and recycled sari silk were looped through the hole in the paintbrush handle to create a way to hang the fairy.

The mother of pearl buttons were added on impulse as I have a penchant for and large supply of them. I think they worked out perfectly to help define her torso. 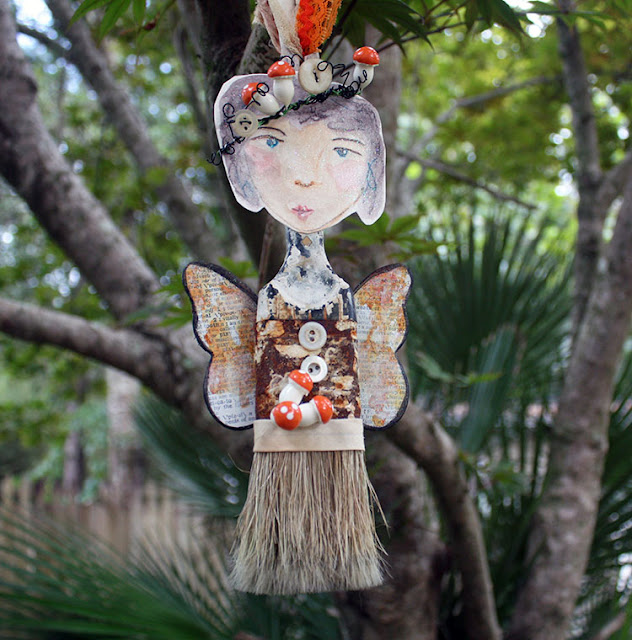 She definitely has a woodland fairy vibe that I totally dig. But, we've joked that she's a button mushroom fairy. 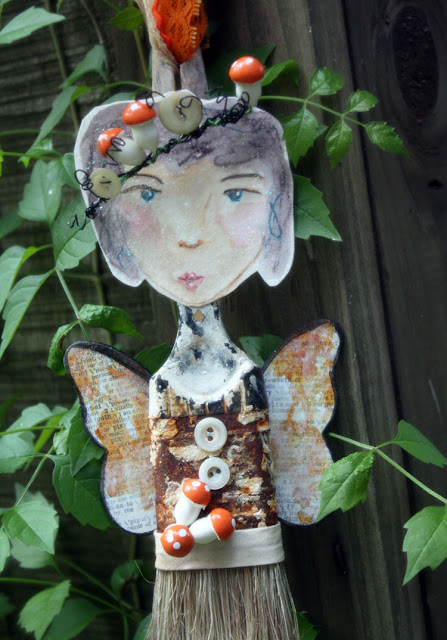 I LOVED the Faerie challenge this month as it allowed me to work with a theme that I adore and know well. Even so, it stretched my imagination and creativity; especially since I created both of these pieces in the rush of a single day. Sometimes being under pressure is just the kick in the pants I need.

Below is the list of participating artists for this challenge. Make sure to check out what they created for this magical theme as well.
Guest Artists
Vic
Divya
Alysen
Kathy
Tammy
Hope (you're here)
Alison
Cat
Sarah
Art Elements Team
Jen
Jenny
Niky
Laney
Claire
Cathy
Marsha
Caroline

Have a Fairy Happy Day!