The day has finally come! It's time to reveal what I created with the goodies from my partner, Kathy of Bay Moon Design. First, let me remind you what the challenge was. This blog hop is for members of the Bead Peeps Facebook Group. Those interested are assigned a partner. Each person sends his/her partner at least one artisan component - be it a bead, focal, or clasp; and at least one other of the component types that correspond to the artist-made piece. (Though, most everyone sends way more than that!) Then, we create! Our creations must include the art piece. Well, let's get to it!

Here's a reminder of the beauties that Kathy sent me. 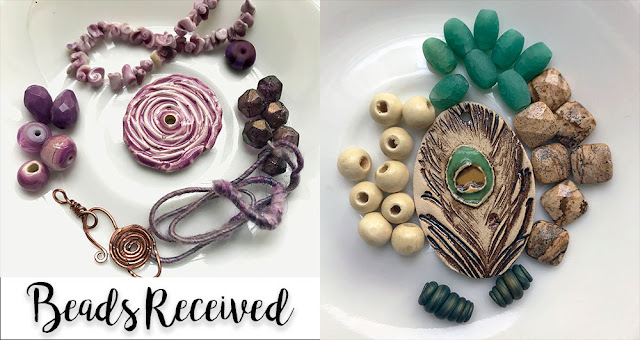 You may recall that she gifted me with two whole palettes with which to work. So much yumminess. Her note said that she couldn't wait to see which one I picked - I picked both!

My gut reaction drew me to the ultraviolet palette first with the focal from Marsh Neal Studio. Kathy also included Wooley Wire which I was itching to use, especially since I didn't use the bit I received from my partner, Kari, in last year's swap. Additionally, I was drawn to the beautiful copper clasp handmade by Kathy herself. In Kathy's pictures, she included the clasp with the other palette, but I was compelled to use it with the ultraviolet pieces. Here's what I came up with. 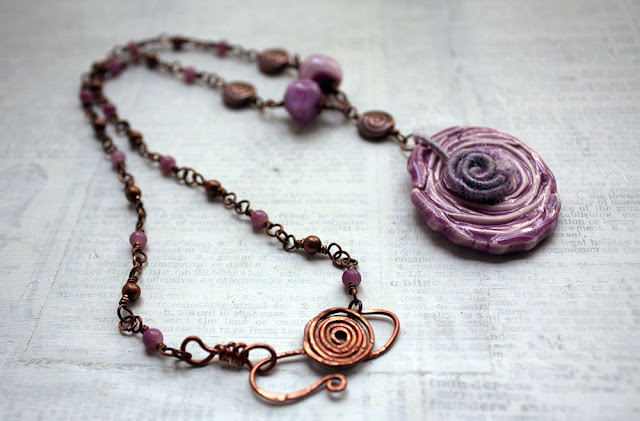 It's really a simple necklace with a bit of a spiral-theme. With the spiral-ish shape already in the focal, I created another at the center with the Wooley Wire to make a bail for the donut-shape. Copper coin beads with spirals on them that just happened to be in my stash continued the theme. I also used two of the large violet beads Kathy sent. (My original post called them ceramic, but they seem to be glass.) The majority of the chain is made of alternating 4mm violet and copper beads that are wire wrapped to one another on antiqued 22 gauge copper wire. The necklace closes with Kathy's hook clasp that also happens to have a spiral on it.

I have to admit that I have a thing for spirals. Oh, and the focal still turns in the bail I created so it's a bit of a fidget necklace. Fun, right?

Now for the not-so-fun part.

Next, I turned to the beautiful peacock feather from Firefly Design Studio. Before I reveal any pictures though, I have to reveal the disaster that occurred. After completing my pieces, I placed them in a bowl on the side of my desk so I could easily transport them to the window to take pictures. Before I could get the pictures taken, the bowl was knocked to the tile floor in my craft room. That amazing focal broke into four pieces. I was heartbroken. I'm still heartbroken. However, I wanted to reveal what had been and attempted to glue those four pieces together to re-assemble the necklace. Here it is in its post-disaster state. I'm SO SORRY! 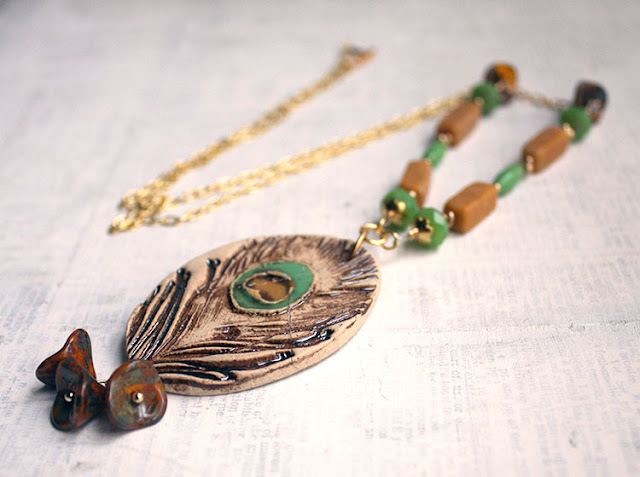 I ended up not using any of the coordinating beads Kathy sent. Instead, I found green faceted glass beads and mustard yellow stones that matched the eye of the feather perfectly. And, the Czech glass flowers I unearthed also have all the same shades as the focal (if you look close). Gold accents were added. I used the beads sparingly, wanting the feather to be the centerpiece, and completed the necklace with gold tone chain. 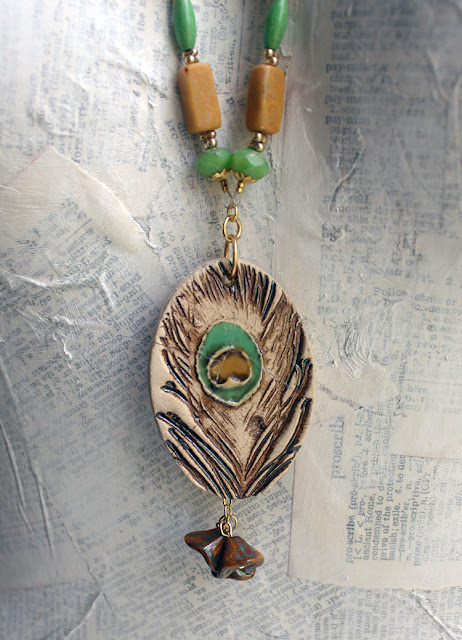 The Czech flowers are hanging from chain that's attached to the jump ring for a simple accent. Can you see the cracks? 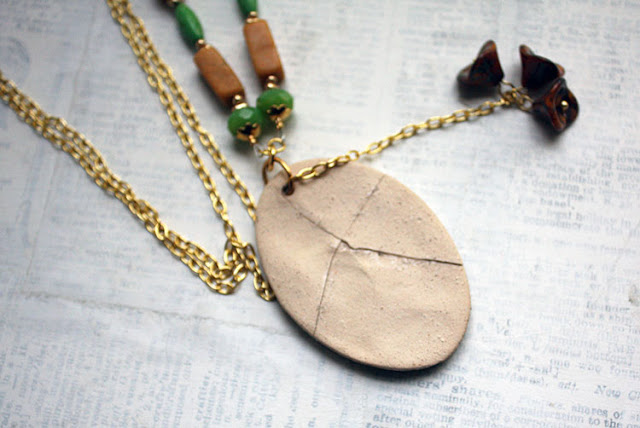 I could cry all over again. Sometimes I'm far too clumsy for my own good. I guess this necklace is mine now though. So, that's a bright side at least.

After completing the two necklaces, I still had loads of beads. And, the gorgeous purple beads with the gold luster were simply begging to be used. 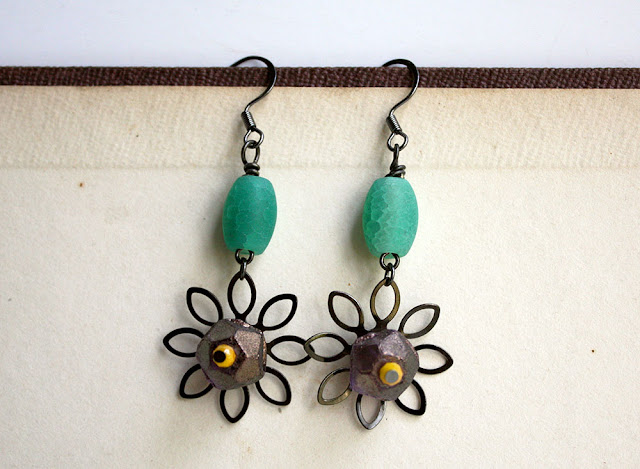 I paired them with green fire agate barrel beads (from Kathy) and yellow Chinese crystals (ZnetShows.com from my stash). As well, I used gunmetal flower accents. I love that I was able to incorporate both of the palettes Kathy sent into these earrings. And, they're so perfect for Spring. 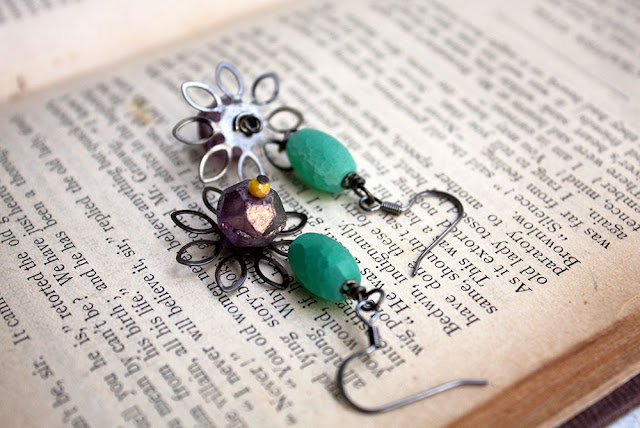 There were difficulties in getting them just as I had envisioned. But, after several tries, I was able to wrap the ends of the headpins in a spiral on the backs to ensure that they stay tight on the petals. After that, they were perfect!

I have plans with some of the other beads that Kathy sent. Though, even with the extended deadline, I just couldn't get to them. I'm excited to see what Kathy does with the beads I sent her. Here's a reminder. 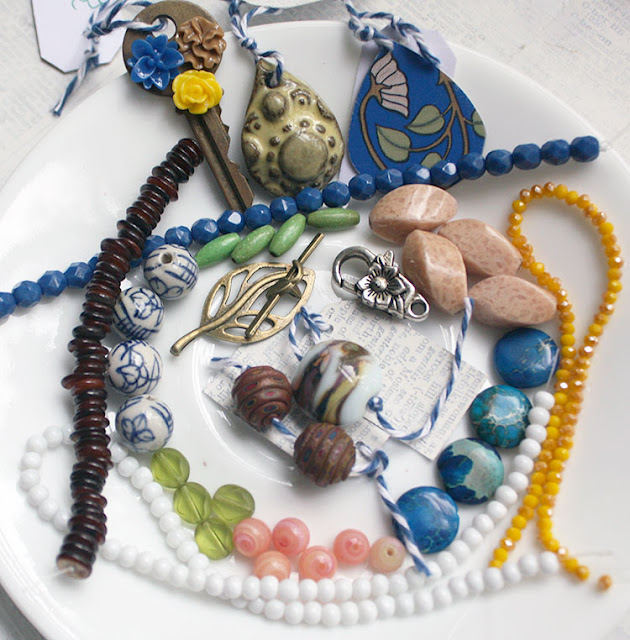 Don't forget that this is a blog hop and there are loads more links to click and inspiration to be found. You can find the full list below.