This week's menu was tough for me. I'm not sure why exactly, but I had a hard time coming up with meals I wanted to eat. I went through my saved vegetarian recipes several times and just couldn't settle on much. In the end, I decided to  figure out what it was I DO want to eat and try to make that work. So, I'll be coming up with a few recipes on my own this week. If they are a success, I'll share them with you later.

Here's my review of last week's recipes.
Curried Brown Rice with Broccoli Casserole (1/2 recipe): As I made this recipe, I started really hoping that it was as good as all that because it made quite a mess; two pots, a pan, a casserole dish, cutting board, several bowls, etc. It was a lot of dishes for a single recipe. Since I halved the recipe, I should have used a smaller casserole dish than the one I used as the layers were fairly sparse. That was my own fault. In the end, we liked the flavor of the dish okay, but it just wasn't amazing enough for all the mess it made. I won't be making this again.

Pad Thai Soup: Wow, this soup came together really quickly and easily. And, we really, really loved it. Our only complaint was that it didn't make enough. Actually, it made JUST enough. The recipe says that it's four servings, but really it was just enough or the two of us. We like soup, we like Thai food, this was awesome. It will definitely be made again and again.

Slow Cooker Black Bean Enchiladas: These were really very good. We ate them without adding any meat. I did add a few additional seasonings (as is my way) It was just some Adobo, dried cilantro, and chipotle. I wish I had halved the recipe as the bottom layer kinda turned to mush after sitting for a little while under the top layer. If I do make this again I probably will half it.

Baked Pizza Rolls (1/2 recipe): I made these for lunch and they came together pretty quickly (especially for something I had to cook for lunch.) Rolling them up was the most time-consuming part. In the end, we both really liked them a lot. I will definitely make these again. In fact, I've added them to this week's menu since I have the other half of the wonton wrappers. YAY!

While I'm on the subject of food I thought I'd bring up this next topic. Sometime in the middle of last week, I shared this picture. 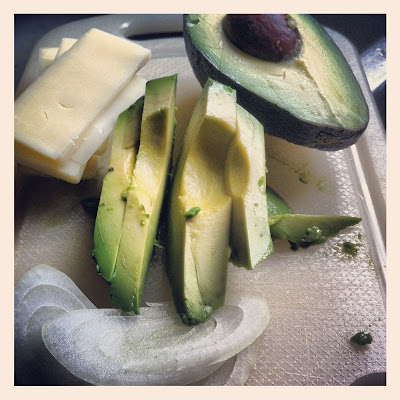 It's my favorite grilled cheese ingredients: sharp white cheddar, avocado, and onion. I asked (on Facebook and Instagram) what everyone else's favorites were and got some delicious suggestions. Now, I want to know where YOU stand on grilled cheeses. Are you a traditionalist with a simple cheese and bread preference or do you break all the rules and add something unexpected? What do you like in a grilled cheese?

at August 26, 2013
Email ThisBlogThis!Share to TwitterShare to FacebookShare to Pinterest