Since last week's post, I've started two others that never really went anywhere. It's been a long week yet not quite long enough. So much has been crammed into the last few days that I'm amazed.

Let's see. . .my mom broke her arm so I cooked Christmas dinner and all the goodies to go along with it. Somehow I finished my Christmas shopping, but the wrapping was not quite exceptional. I received just what I asked for for Christmas and am both blown away and consumed by them. (from Pat: new laptop [wheeeeeee!!!] and Lego Lord of the Rings and the rest of my family surprised me with a Keurig!)

It's taken much longer than I expected to get the new laptop just the way I want it, but now that it is I'm so happy to have one in my life again. OH, the possibilities! The ease of taking it in the craft room with me has me even more motivated to get the room in order. With that in mind, I think I'm going to be purging some items in the coming months. What caught my eye today that I can let go of was a massive stack of magazines.

These are copies of Beadwork and Bead & Button that I purchased when I first got into jewelry-making. These two magazines were the only ones I could find in my area related to jewelry. However, they are both very centered on working with seed beads and that's not really what I do.

I thought that instead of letting these great magazines sit around and gather dust or tossing them into the trash, that I would spread some cheer and give them away. 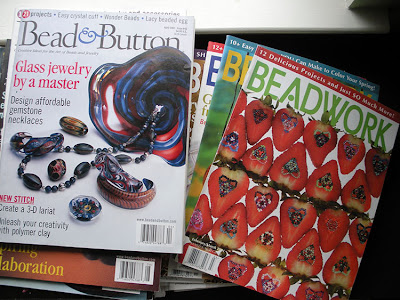 Let me go ahead and say that some of the issues are not in the best condition. It seems that a magazine or two got wet at some point and some have loose covers. On the other hand, many look to be as good as new.

Here are the issues included in these stacks:

I realize that they're old as all get out, but I said these are back from when I started beading. . .that was a long time ago!

If you are interested in winning the whole she-bang (all of these magazines), just leave a comment below.
You can also share this giveaway on your blog, twitter, or FB and you'll get another entry for each share. Be sure to leave a separate comment for EACH way you've shared this giveaway. That's a total of four entries.