Way back in July an old friend (that I haven't seen in YEARS, but we're friends on Facebook. That probably didn't need to be said, everyone is friends on Facebook!) proposed a crafty swap. She ordered a bunch of mini dominoes and sent me twelve. Ten were white and two were smaller black ones.

Our only requirements were that we used six of them to make something for the other and that our deadline was the end of September.

I moved those darn dominoes all over my desk before finally sitting down and just getting to it. Of course, some digging around the craft room and a trip to the craft store for inspiration and supplies was in order first.

I covered my whole desk with domino-altering fun.

Rebecca (that's her name by the way) had requested at least two magnets and a pair of earrings made from the dominoes. That at least narrowed down where I would start.

Here's what I came up with.

First I got to playing with my alcohol inks and inked up this whole domino in shades of green.A  snippet of scrapbook paper was used for the image. I sealed the whole thing with Ranger Matte Accents before adding some ICE Resin to the top. (The back of the pendant can be found a few pictures down.)
To complete the piece and keep it simple, I made a chain of simple loops with e-beads and wire. 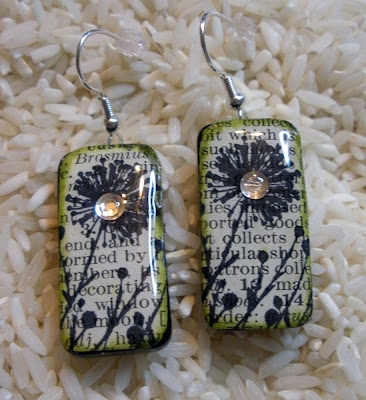 These earrings are probably my favorite pieces in the mix. I stamped dandelion images onto a dictionary page, cut the page to size, and glued them onto the smaller black dominoes. With a q-tip and some Distress Ink, I lightly colored the edges of the paper. A layer of matte Mod Podge sealed the paper. A small rhinestone was glued to the center before the whole top of the piece was coated in ICE Resin.

E-6000 glue was used to stick on the bails to the back of all the jewelry.


From there, I moved on to playing with the dominoes to create magnets.
I really went crazy and used a large variety of materials to alter these.

The domino on the left was altered with an image I had printed from from some of Dover's free sampler images. I colored it with chalk pastels and sealed it with the Mod Podge. The crown was a piece of Tim Holtz Grungeboard. It was painted with gold acrylic paint before the dictionary page was added and sealed. E6000 holds that crown on tight. The domino on the right was covered in strips of bright washi tape and sealed. A plastic flower was glued to the center. The sides of both of these were painted with a black paint pen and the tops were coated in ICE Resin.

Domino #3 was coated in glue and several dustings of PearlEx Powder. A stamp with Staz on Ink was pressed onto the dry powder. A small diary key was decorated with alcohol inks and then glued to the surface of the domino. The edges were painted silver and wrapped with a strip of rhinestone stickers. The face was sealed with ICE Resin. The domino on the right was altered with more alcohol inks before a layer of Glossy Accents sealed the domino. The 3D silver dragonfly was glued to the top and a small strip of aluminum tape covers the edges to mimic soldering.

Small magnets were glued to the backs with E6000.

In addition to these pieces, I also made Rebecca a pair of dragonfly earrings and a decorated box. Here are the earrings.

In my haste to get these items in the mail, I failed to take a picture of the box. It was a play on the domino theme and the paper mache box was covered in "game papers" (sudoku, crossword puzzles, jumbles, etc.) The feet were upside down monopoly houses and on the top was a die and a domino transformed into a lid pull. Fun stuff!

Rebecca still has plenty of time to alter her dominoes. I'll make a point to show off what she made just as soon as I get them. In the meantime, I'm anxious to get back to just playing with my beads for a while.

At this point I know I've bored you all to death so I'll leave it at that. . .well except to ask How would you have altered these?
Labels: friends mixed media swap
CraftyHope
I’m a jewelry-artist, treasure hunter, & nature-lover that finds joy in the smallest things. I hope to spread that joy and inspiration.