Catching Up and WWWW

It must be a crazy time for everyone, because not one of you has commented on the fact that I haven't posted anything in a whole week. I guess we're all busy. Summer's coming to an end, Hurricane Season is in high spirits, and who has time to spend on the web. For me, that time has been limited. I was so proud of myself last week for catching up on my blog reading and keeping the number down. As of today, my main blog/feed reader, Google Reader has a list of 764 blogs for me to catch up on. I had a BUSY BUSY weekend.
On Friday, LOML* and I met some friends in Pensacola for a Beer Festival and then dinner. The festival was okay. There were WAY too many people in too small a place for my taste. And taste we did - LOTS and LOTS of beers. There was only one I tried that I didn't like, but I only asked for ones I thought I'd like - fruity, chocolaty, ales, porters, and wheats. I am a big fan of the fruity wheat beers. Those are my favorites by far. However, I didn't find a whole ton of these and got tanked on the others. I even got to try a Blackberry Champagne. It was a little too sweet, but pretty good. I knocked several people in the back, arm, and beer glasses with my very pointy elbows by accident and spent a lot of the evening apologzing for this. Again, it was way too crowded. 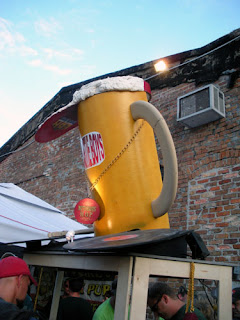 This was one of our favorite booths. It's The Yeastie Boys. Yes, that's a mug of beer working a turntable, wearing a Notorious H.O.P. chain. AWESOME!!
The rest of the weekend is a bit of a blur, not because I was in a drunken stupor or anything, but because I was in a crafting stupor. Yes, I spent the majority of my weekend CRAFTING. I did get some shopping done - I HAD to use that 40% off coupon at Hobby Lobby of course. But then, I broke out the paint, glue, glitter, shrink plastic, and everything else that got my hands all sticky and colorful. It was pure bliss. Basically, I made a ton of pendants and worked on sealing and backing some shrink plastic ones. The next step is to string everything. Of course, once they're all completed, what do I do with them? That's one of those questions I've been pondering for years.

On Monday LOML* and I took the day off as his best friend is in town and wanted to spend a day at the beach. We started fairly early and stayed late. I didn't bother with sunscreen until it was too late and now I have a very red face. Dang pure, white sand that reflects the sun back onto your face whether you're in the shade or not!! I WAS in the shade for most of the day. Overall, it was a great time.

Getting back to work yesterday was hard. I had some catching up to do and then my Mardi Gras Society meeting. I hope you can tell why I haven't been present for a week. I've been having too much fun. Not that blogging isn't fun, I just have been pre-occupied with other activities is all. I hope to make it up, but we'll see.

And now for your regularly scheduled "Wild, Wild Web Wednesday"

I'm hoping to post some of the completed pendants on Fairy Creative later today if possible. Check them out and let me know what you think.
at September 10, 2008
Email ThisBlogThis!Share to TwitterShare to FacebookShare to Pinterest
Labels: beach, beer, craft, friends, LOML, personal, Wednesday, wild