It was quite a full week around here. Take a peek. 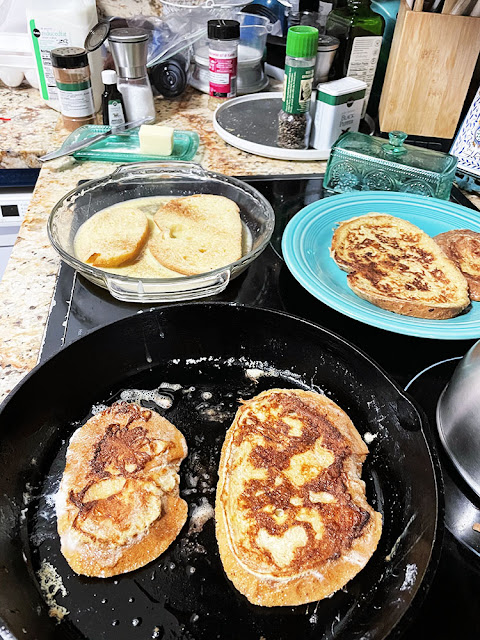 To use up a couple of packs of bakery bread in the house, I made French Toast to fuel us up for Sunday's day ahead.
Pat wanted to get the shed cleaned up so he could move more of the items from the damaged barn over before he began tearing it down. This is what we were working with inside the shed. 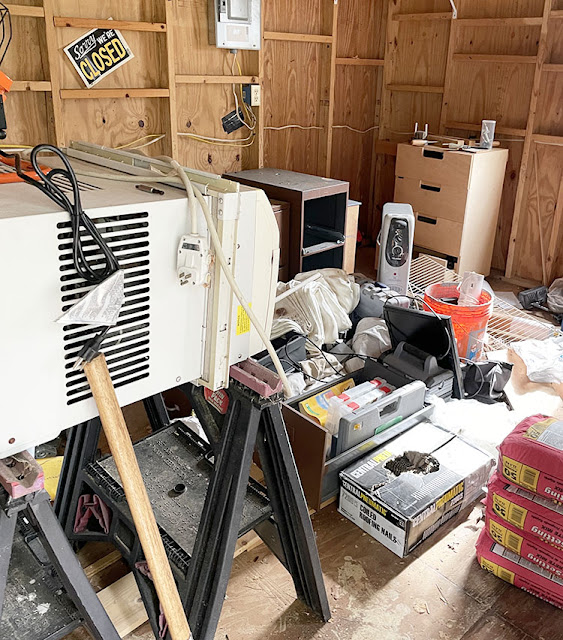 With a little teamwork and focus, we had the place picked up and swept before lunchtime! From there, we delivered our donation of gifts for the Giving Tree and picked up lunch. The afternoon was spent on our own endeavors as Pat tackled more in the yard, and I worked in the house.
Monday was all about the errands: groceries and picking up gifts.
I didn't leave the house at all on Tuesday as I worked on chores and began a Christmas craft that I hope to share soon. I did make a pretty yummy Mexican lunch of bean burritoes. 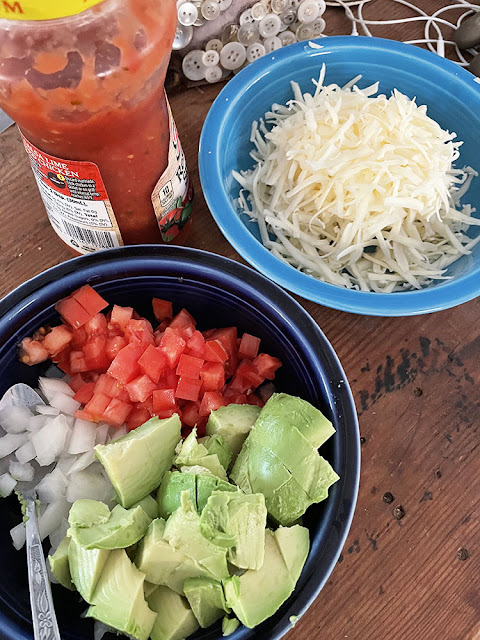 And, I admitted that my love of Mexican food is really all about the toppings!
I spent the bulk of Wednesday at my mom's house. We ran a couple of errands before my niece came home from school. In the evening, she and I dove into a cookie-decorating kit. 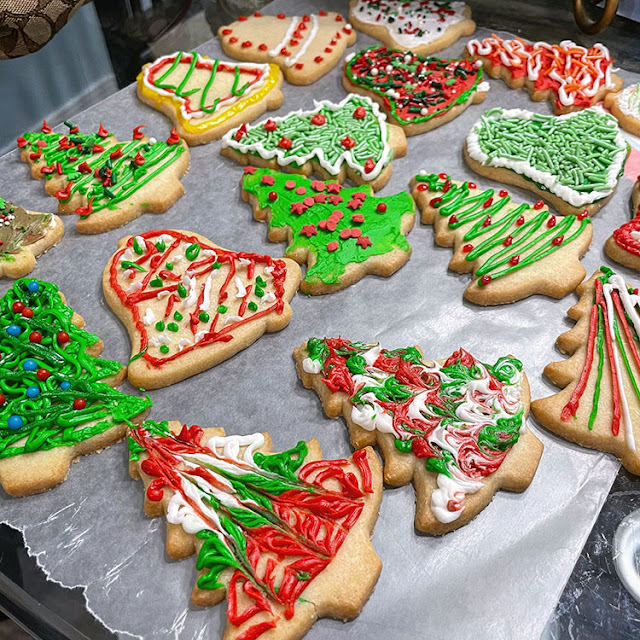 I learned that decorating cookies isn't really one of my strengths. Ha.
I woke to a foggy Thursday morning that gave a beautiful haze to everything as the sun rose. 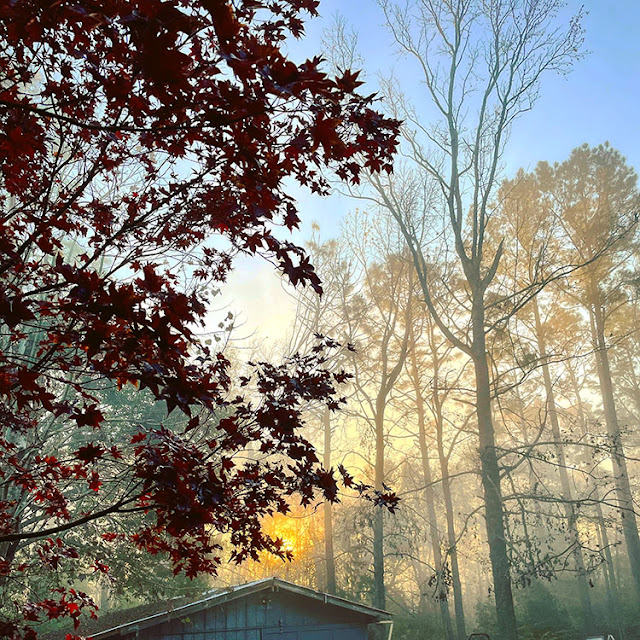 Pat and his sister's partner worked much of the day on dismantling the roof of the barn at the bottom of that picture. Me? I began another Christmas craft. 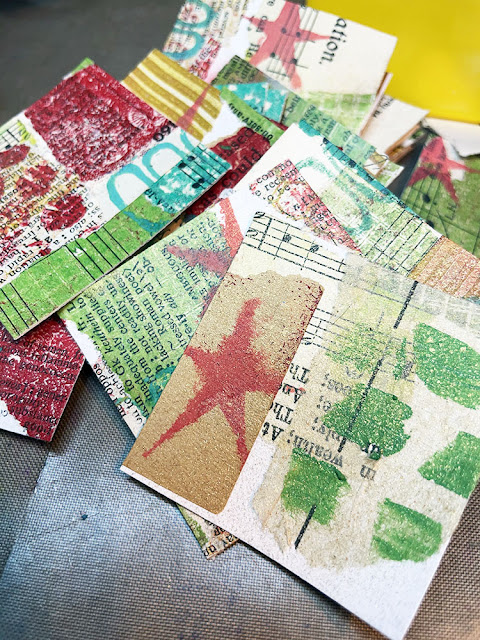 Again, I'll share it soon.
The evening was just as hazy as the morning. When I went out to close the chicken coops, the flashlight's beam highlighted the water vapor in the air. 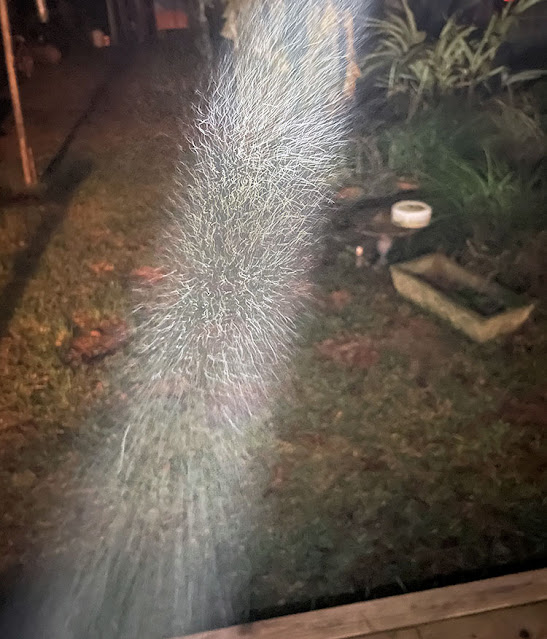 Crazy, right?
I finished the rest of my Christmas shopping on Friday, which is a new record for me! We also met a friend at the Fairhope Brewing Co. for a couple of beers outside. 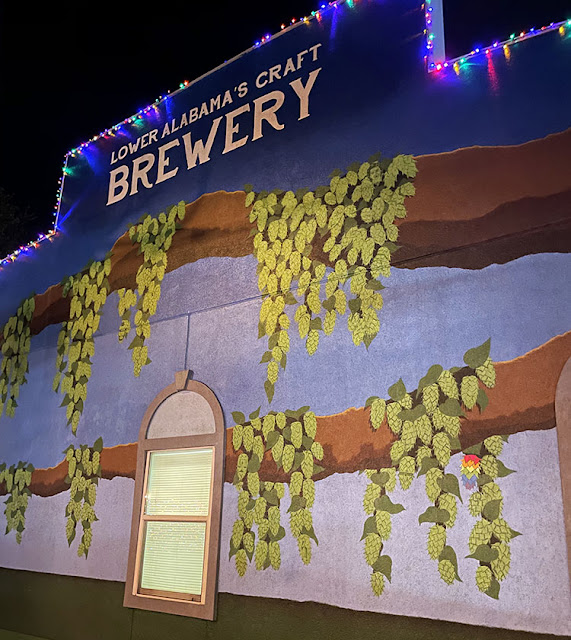 This was only the second time in nine months that we've consumed something out in public. It felt so weird and like we were breaking some rules.
On Saturday, the Japanese Maple was glorious! 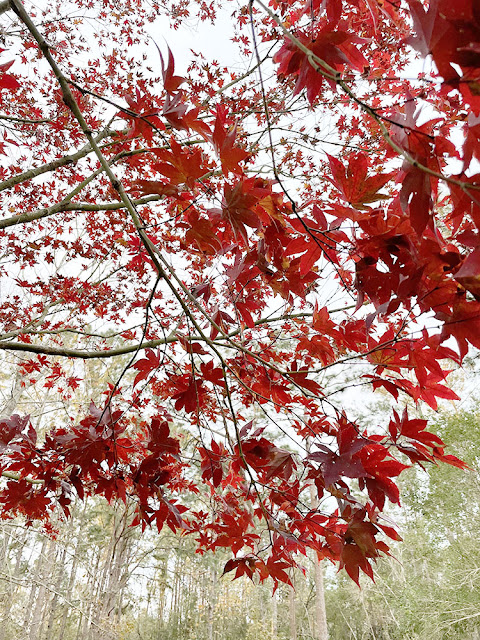 Pat continued to work on tearing down the pole barn while I did some cleaning in the house. The Bama game was on early, but we decided to wait and watch it recorded later in the afternoon so we could tackle those chores first.
While Pat removed the plywood walls in the barn, he found this gem and called me out to there to admire it. 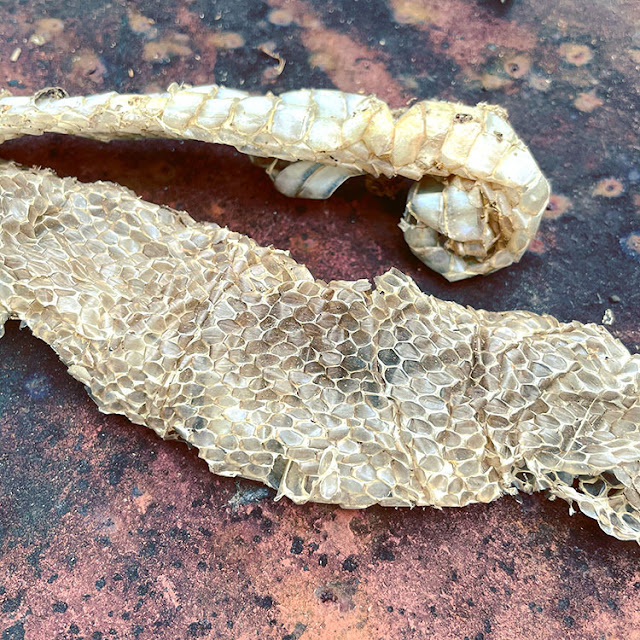 It's a snakeskin from one of the Oak Snakes we've seen near the barn. I think the texture is so cool.
I kept on track for #CarveDecember this week. 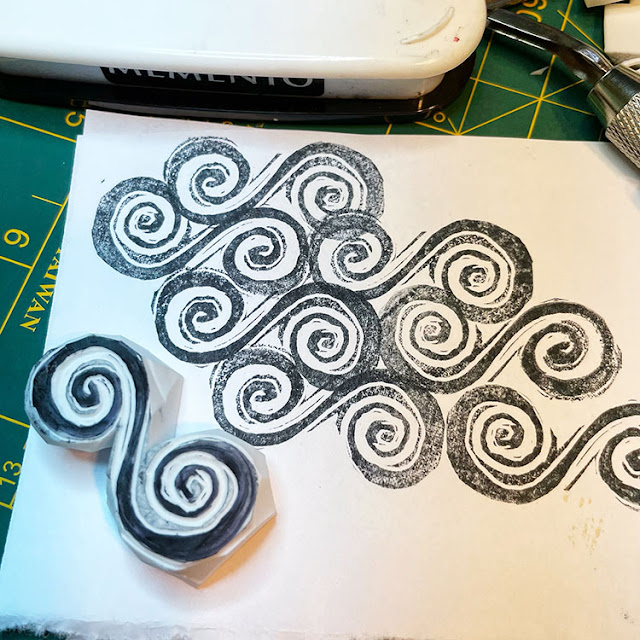 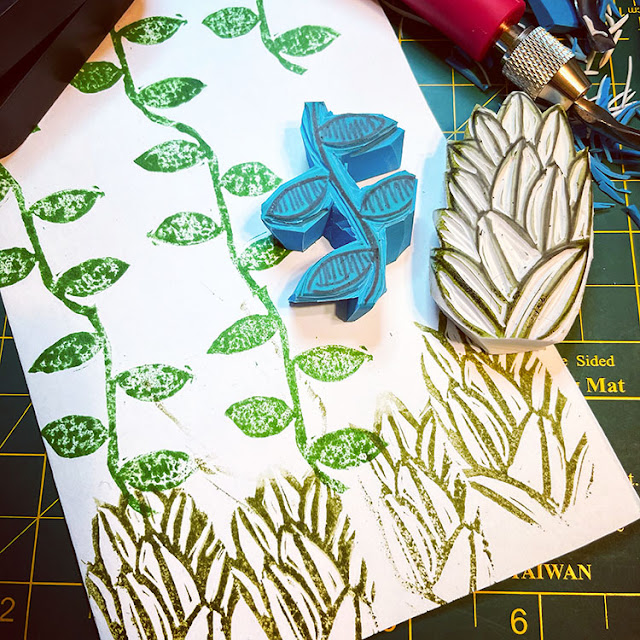 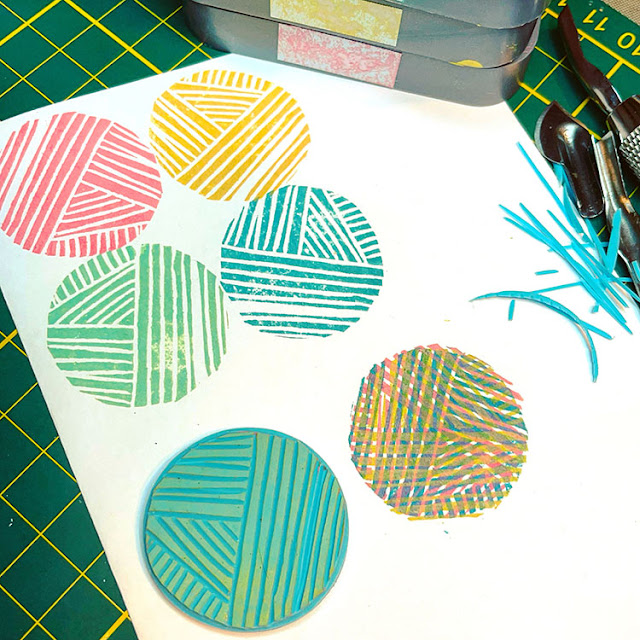 "Stripes" was the prompt for Day 8. This might have been my favorite carve of the week, and so easy!! 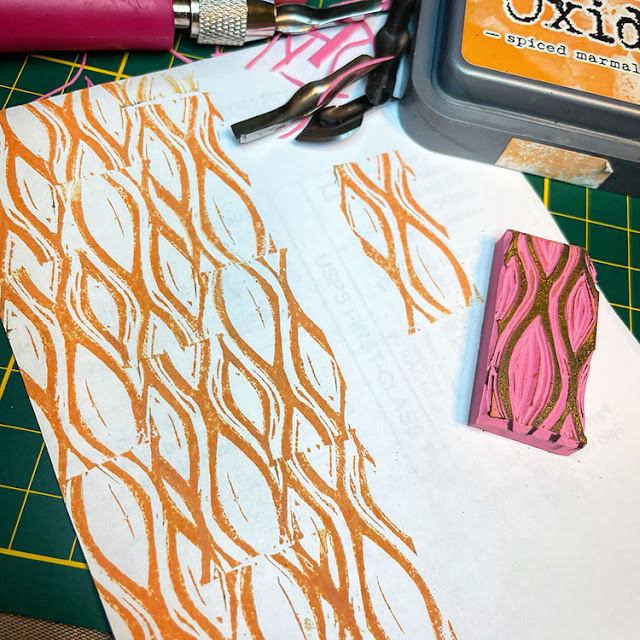 The prompt of "together" made me think of this shape that I've been doodling for a few months now. It's similar to the shape I did for the "float" prompt last week. 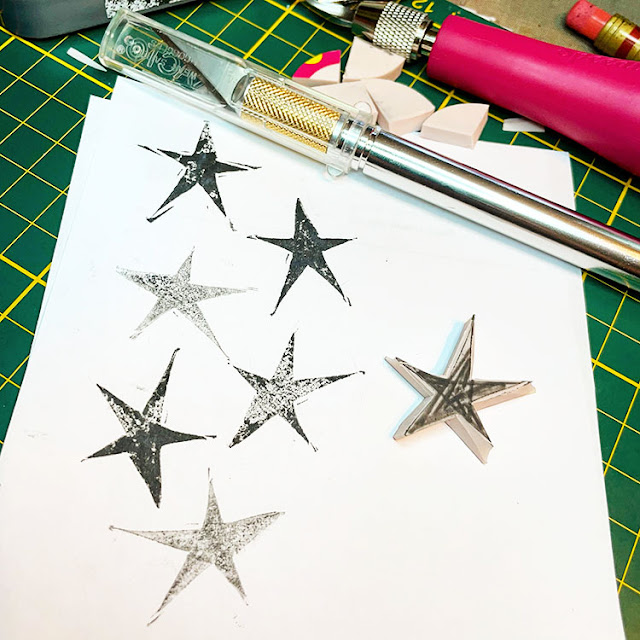 At first, I was pretty stumped by "five" for day 10. Then, I decided to carve a five-pointed star.
Shortly thereafter, I had an epiphany. 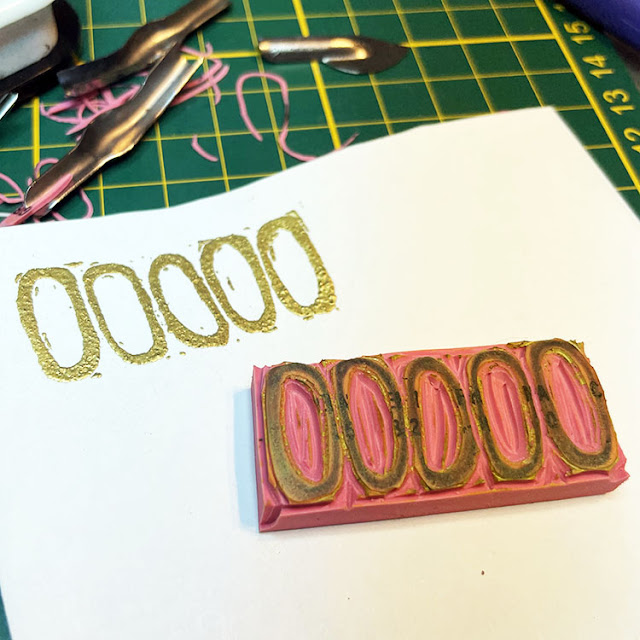 I carved five gold rings as a bonus stamp! 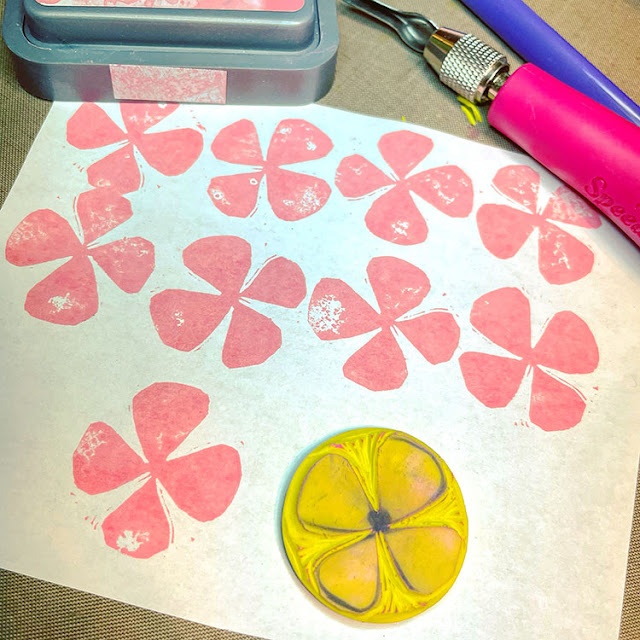 "Fan" on the 11th just didn't excite me, but I carved this one that could also be a flower. 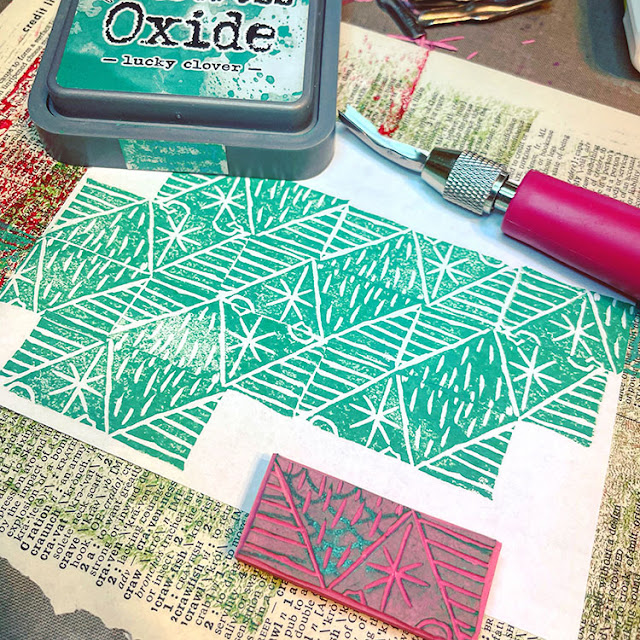 The "busy" prompt on the 12th just had me making a stamp that was...well, busy.
Like last week, I only found a few snippets of inspiration to share with you. What can I say...I've been busy!
And, that was my week. Now that my shopping is done, I feel like I have a world of options in front of me. So, I need to focus on what it is I want to accomplish before this year is out. How are occupying these last few weeks?
Labels: beer christmas craft food inspiration nieces Pat silverlox stamp carving
CraftyHope
I’m a jewelry-artist, treasure hunter, & nature-lover that finds joy in the smallest things. I hope to spread that joy and inspiration.