This year is quickly winding down, isn't it? The days seem to just slip by. I've been off my morning routine for several weeks now, and it has made me feel a bit off-kilter. I'm not sure if I'll be able to regain that balance before Christmas, but hopefully, I will in time to psyche myself up for the new year. Maybe. I can't quite seem to put my finger on what's made me so unbalanced as of late. But, I'll push forward as there isn't any other option, is there? Anyway, here's a peek at what I was able to stop and capture this week. 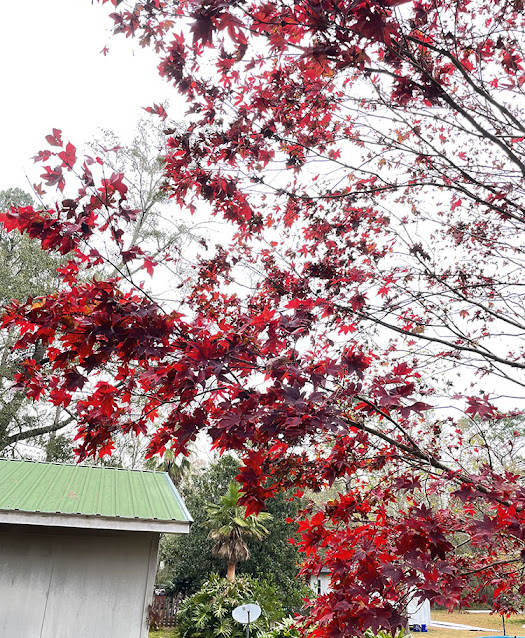 My Japanese Maple has been gloriously red all week (as of today, it's almost bald) so there's at least one more picture of it in this post. The above was taken on Sunday when it seemed to almost be glowing. I kept myself busy much of the day and spent much of the afternoon wrapping presents and watching Christmas movies.

I know I kept myself busy on Monday - maybe too busy as there's not a picture to share. Most of my work was business-related as I packaged a few orders and worked on videos.

Since Monday was so full of work, I went grocery shopping on Tuesday. On my return from the store, the lack of a barn was in full view. 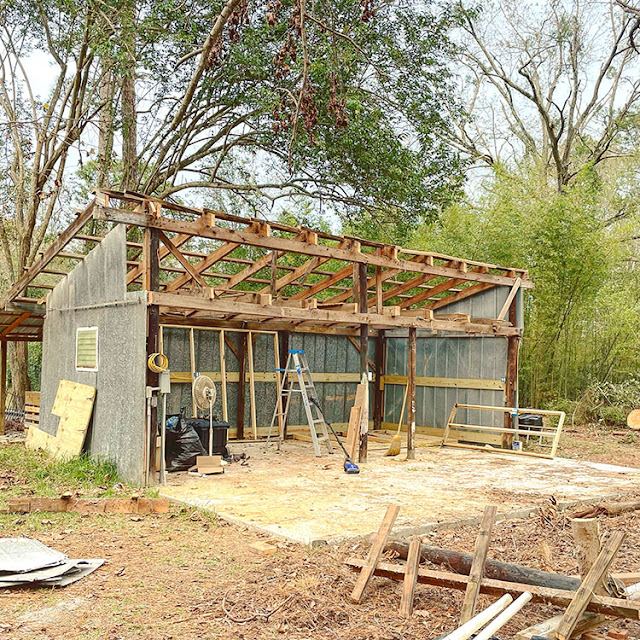 I promise there had been more to it when I left for the store! Pat's been busting butt trying to get it down so we can put the new metal building there when it gets built (it will be a few months before that happens though.) This demo job has been his obsession for a few weeks now, and he's SO CLOSE to being done! 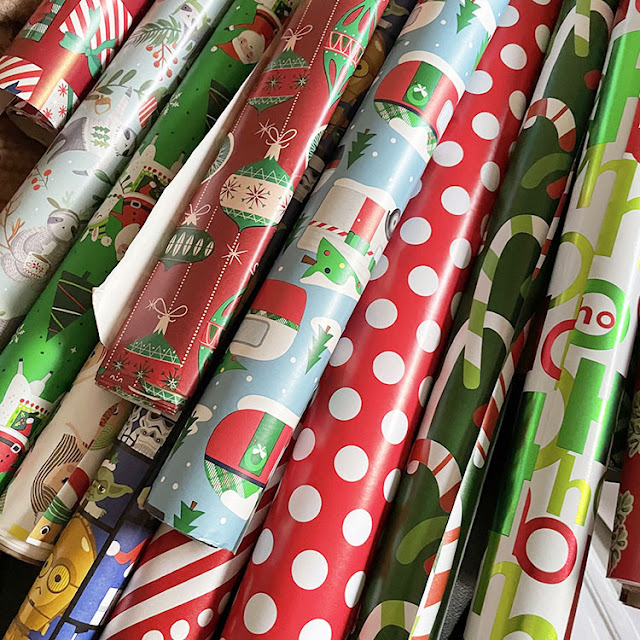 At some point on Tuesday, I also snapped this shot of some of my pile of wrapping paper. I believe the picture was supposed to go in one of my videos this week to prove that the majority of my paper is red and green. With the exception of the Star Wars paper on the bottom left, it's true, I have a type.

It rained before we got up on Wednesday, so I found the maple leaves dripping and had to capture that beauty for all to see. 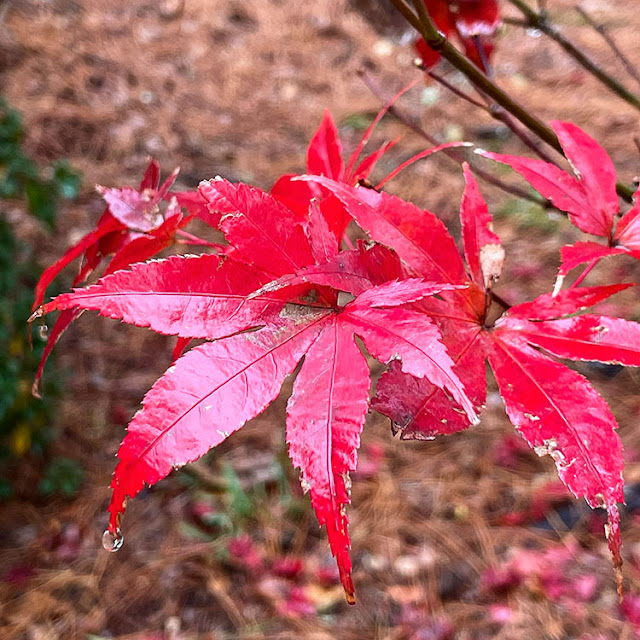 I busted out chores and sending out one package of gifts. In the evening, I realized that I was aching for a Christmas glow in the house and decided to hang some lights across our TV stand. I'll have to get a picture of that for you this week. We've only enjoyed the lights one night this week as we've stayed busy every other night.

On Thursday, I headed to Mobile to deliver a couple of orders and help my mom with a few things. Before I left though, I made sure that I uploaded a video on making gift tags. 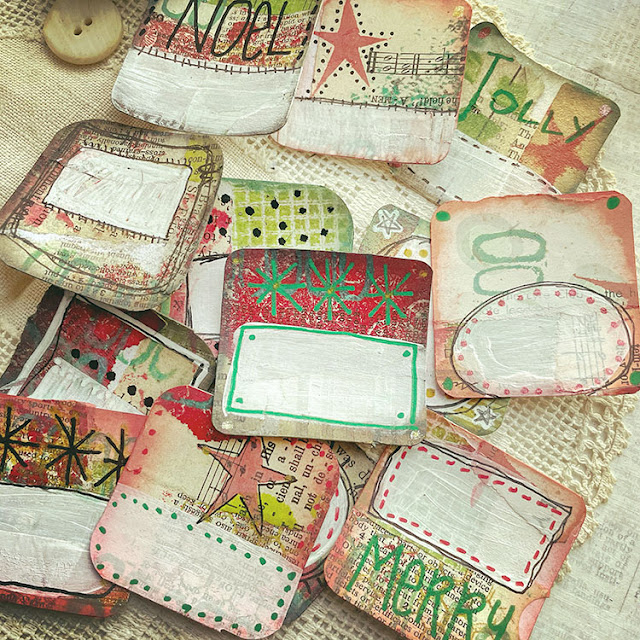 I'm really smitten with those tags!

I had a rough time focusing on Friday, but did knock out quite a few tasks. When I went to pay the bills, I got a kick out of our final bill from AT&T 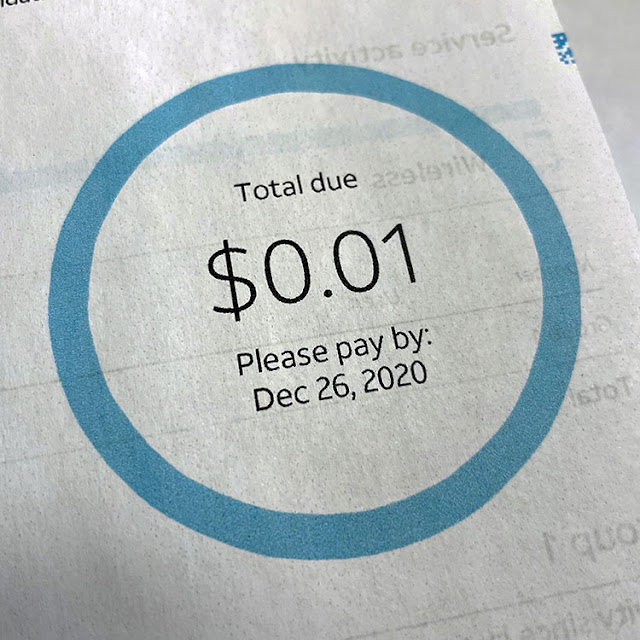 Yes, they sent us a bill for ONE PENNY! I'm sure no human eyes ever saw this bill before it landed in our mailbox, but it felt a little ridiculous. We paid it.

I also worked on getting Beaded Bookmarks made for my Etsy gifts. 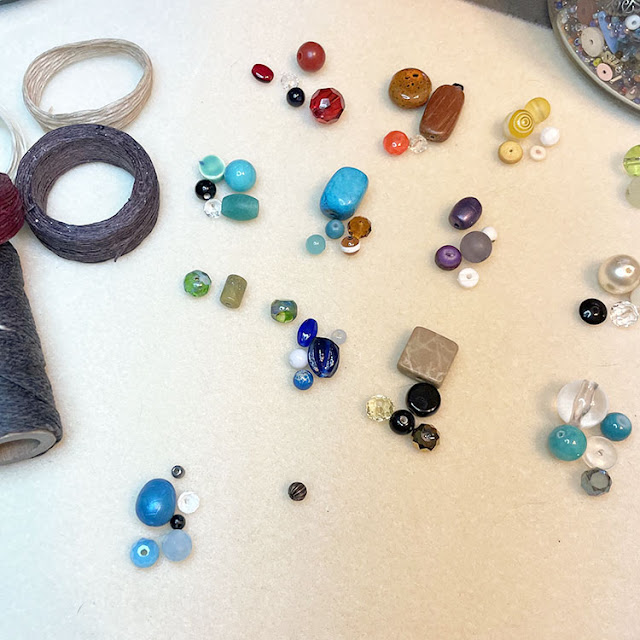 As I worked on wrapping the LAST of the gifts and baking some cookies on Saturday, Pat was tearing down more of the barn. When I stepped out to check on his progress, I found some real treasures. 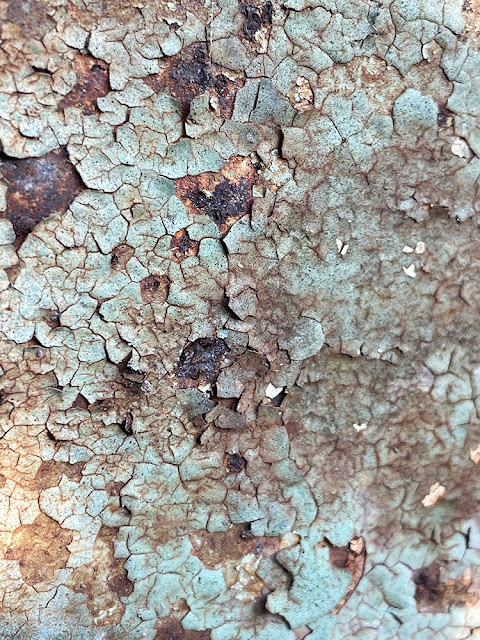 The rusty crackle on this old, holey, metal cabinet caught my eye. I had to take a few shots before Pat hauled it up the street to the trash pile.

And, we found another bottle of random poison. 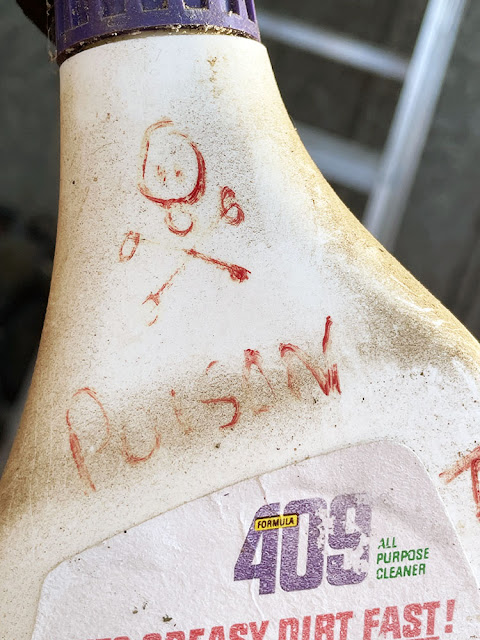 Second, what the heck are we supposed to do with this?

In the evening, we watched the SEC Championship football game. It was a tough one, but we (Alabama) won in the end. The last quarter about killed me. Apparently, that's considered a good game. lol.

Throughout the week, I made sure to do my stamp carving for #CarveDecember 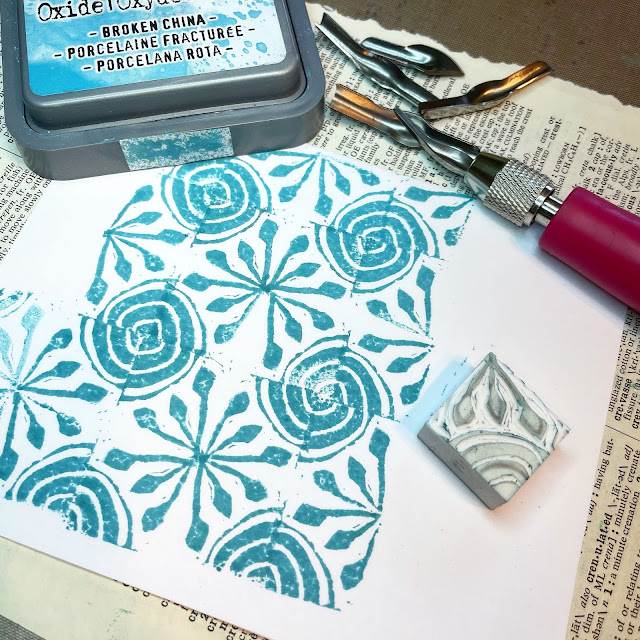 Day 13 was "square" so I tried to make a tile stamp. It turned out okay. I'm not so great with being exact, as you'll see in several of these stamps. 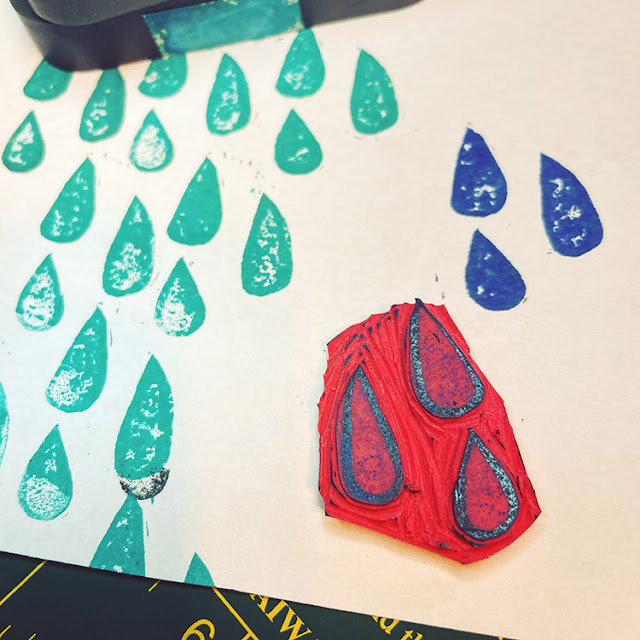 Blue was the theme for Day 14. I was stumped and went for tears or raindrops or whatever you want them to be. 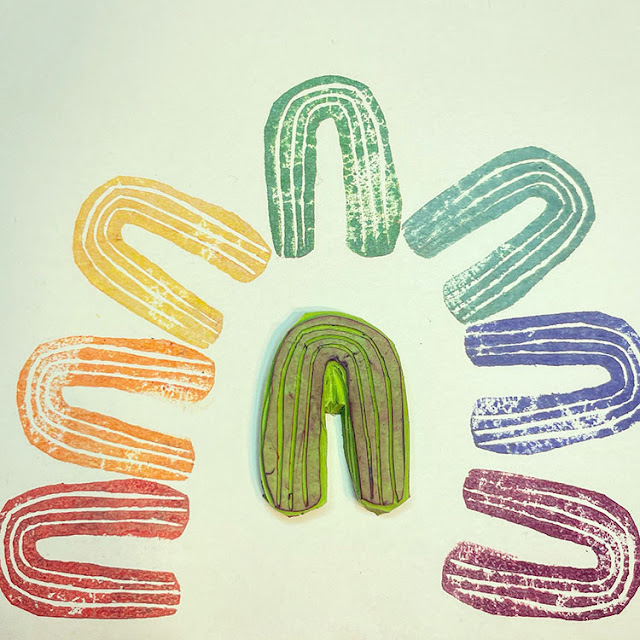 The "hexagon" prompt for Day 15 absolutely baffled me. So, I went off-prompt for the first time and instead tried carving the chunky rainbow that was in my head when I woke up. It didn't come out as I envisioned, but it's still a solid stamp. 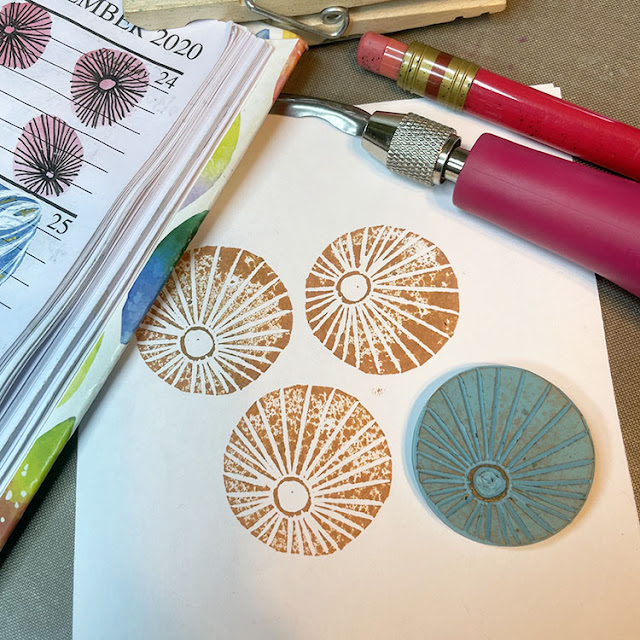 I was a little more on-theme for Day 16's "calm" prompt as I decided to use one of my calming doodles as inspiration. This stamp may be one of my favorites so far this month. I really dig it. 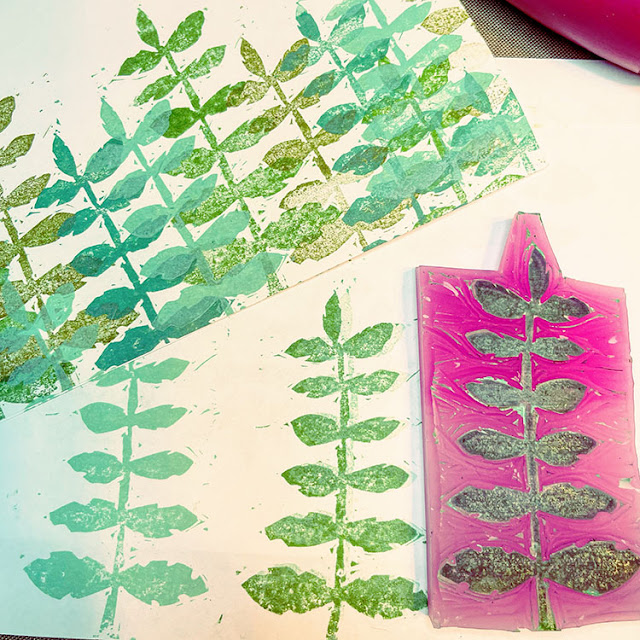 Like the jungle-prompt last week, Day 17's "Verdant" prompt made me think of all things lush and green. As I was finishing up this stamp, I nicked one of the leaves and decided to "fix" it by taking notches out of the rest of the leaves. It worked out okay. 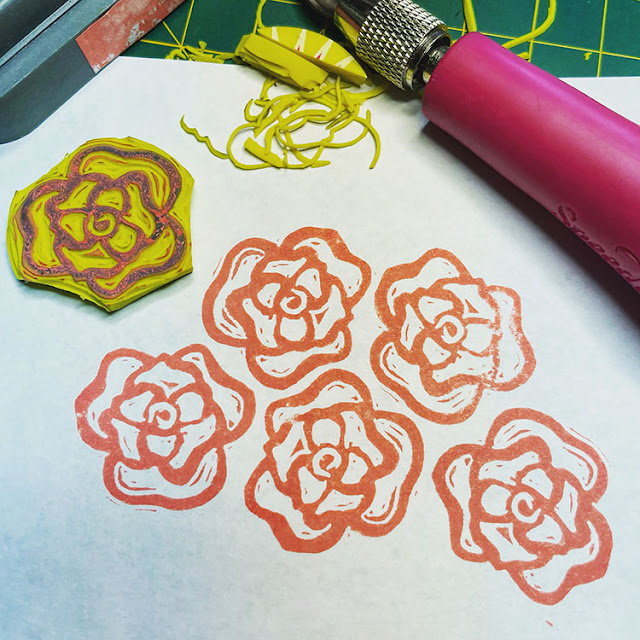 I'm not really sure what this doodle flower has to do with the "big" prompt on Day 18, except that it's a fairly big-ish flower stamp. I dunno. I like it. 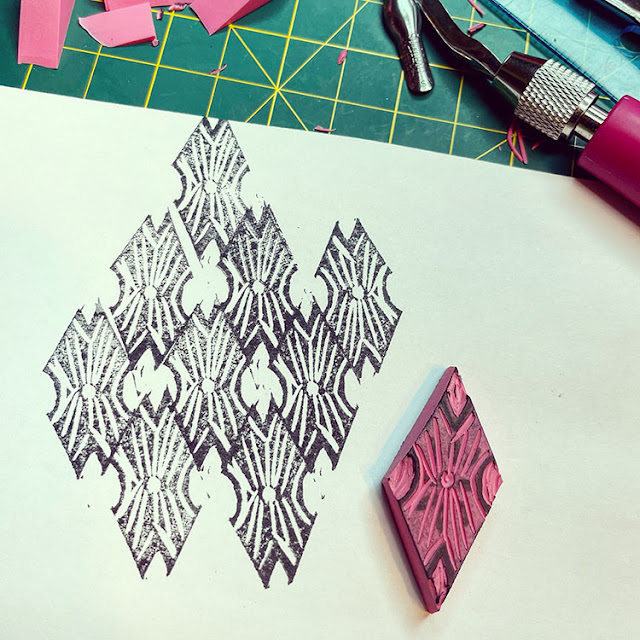 For the "fit" prompt on Day 19, I tried to make a stamp that would fit together. It didn't work out as I had hoped. But, that's okay. I just didn't have the patience and creativity to deal with it that day. It's a solid stamp though - good for texture.

I was all over the place this week and didn't have much time to search for inspiration. I apologize for the short list.

And, that's it. Now that the presents are wrapped and the shopping season is coming to an end, I'm not sure how I'll fill the week ahead, but I think I may be taking some time off to enjoy myself (and maybe clean and organize the craft room). So, if I don't post much, don't worry about me. I do hope you take some time for yourself and do your best to enjoy the season. Merry Christmas, Happy Holidays, and Happy New Year!!
at December 20, 2020
Email ThisBlogThis!Share to TwitterShare to FacebookShare to Pinterest
Labels: beads, christmas, inspiration, nature, Pat, silverlox, stamp carving, week in review

Although I've been trying to organize and purge the craft room this week, I still hit up the thrift stores and estate sales. WHAT WAS I ... 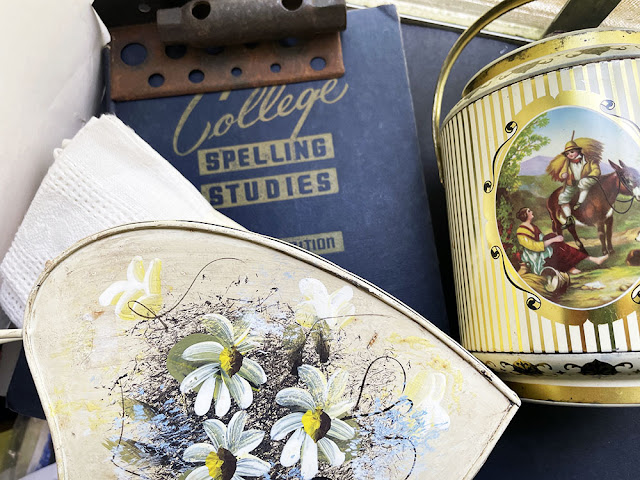