It seems as though the renovations will never end at our house. While living in chaos is indeed driving me a little crazy, each project has me more and more excited about how far we've come in this process.

Before I begin to share all the photos (and there are plenty), I ask that you refrain from judging the mess too harshly. As I said, we're living in chaos with furniture and supplies pushed out everywhere. It's killing me. Moving on. . .

Our latest project was painting. And, we painted EVERYTHING! Since we'll be getting new floors, it seemed logical to paint before we put down the flooring. We started at the top - ceilings. This had to be done because the kitchen ceiling (I asked you to make note of it in the last renovation post) was a shade I can only describe as peachy brown. Eek! 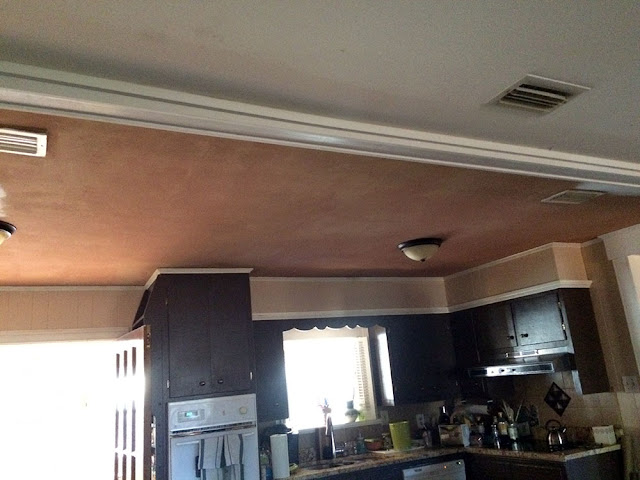 Because there were patches in the dining room and the hallway's ceiling was painted in the same beige shade as the walls, Pat painted all three. 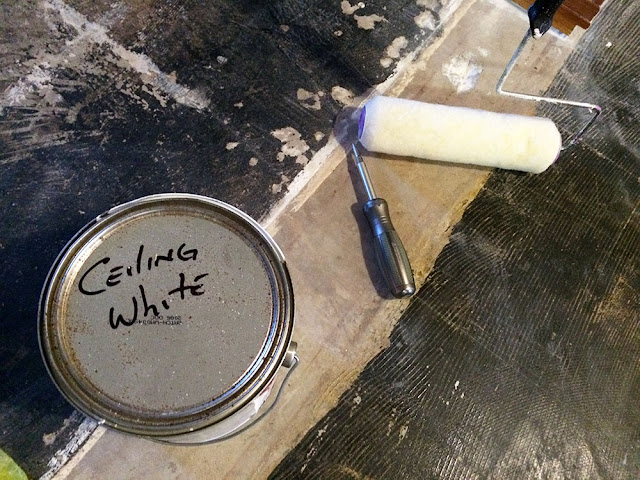 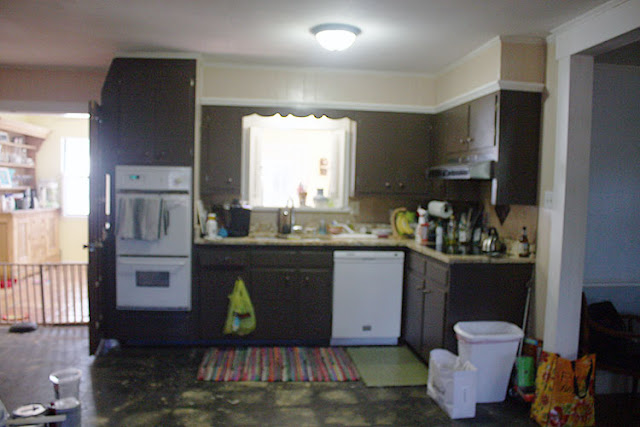 Next up was the trim - ceiling molding, accents, and doorways. 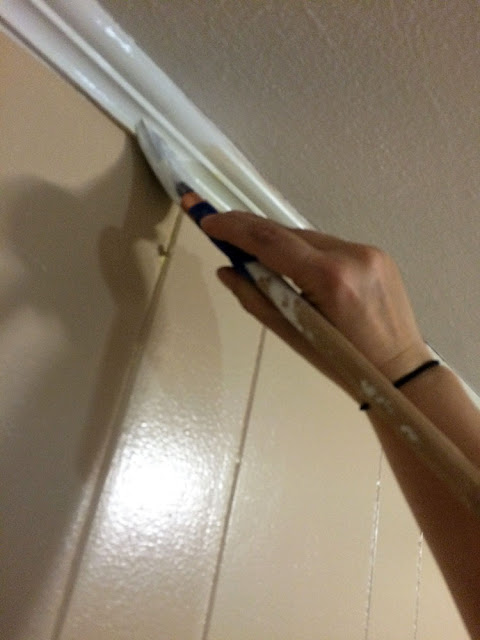 I quickly learned that gravity is no friend of painting upside down. While this was a tedious task, I'm glad to have it done in those areas at least.

From there, it was time to focus on the walls. While the white in the dining room was fine, we really wanted it to blend with the living room a little more to make a more cohesive space. 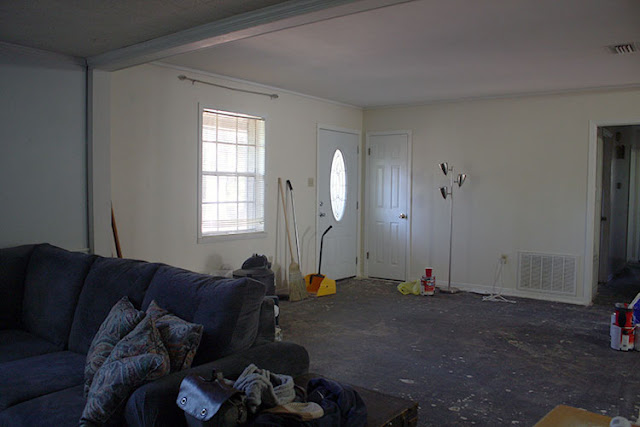 The beige in the hallway was just a little too dark. 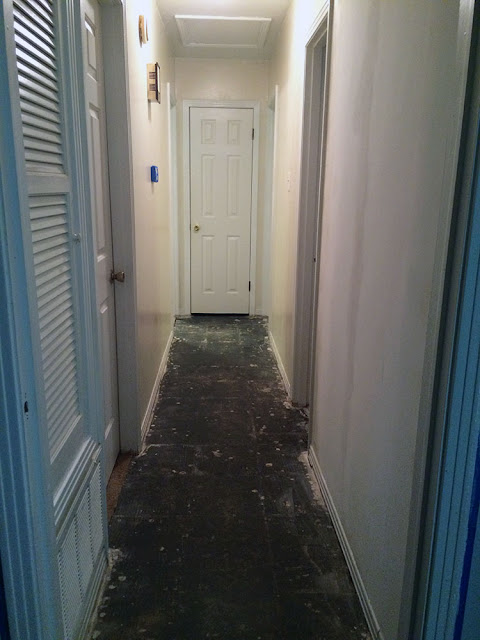 And, of course. . .there was the kitchen. 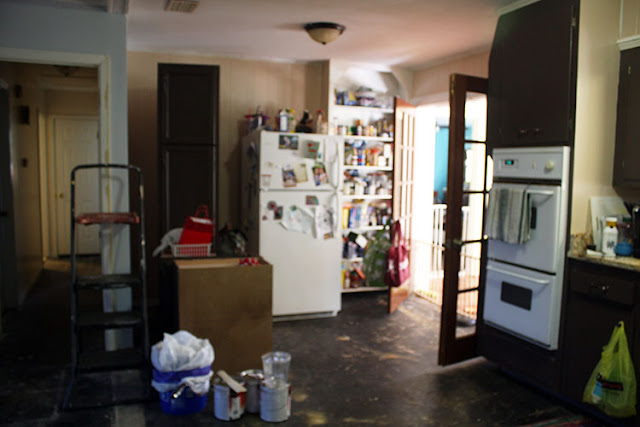 The dining room received the same light gray that we did in the living room. 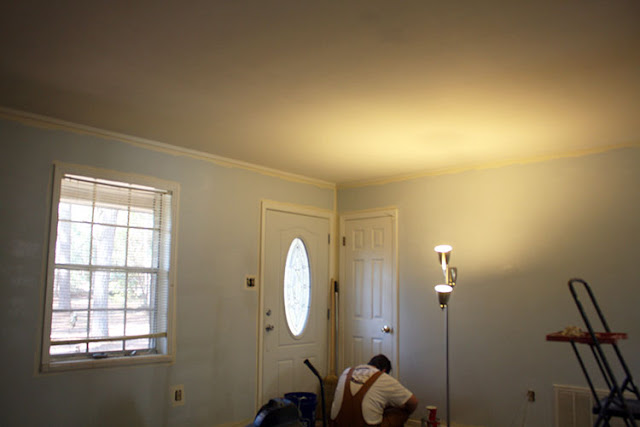 The hallway was painted a refreshing white. 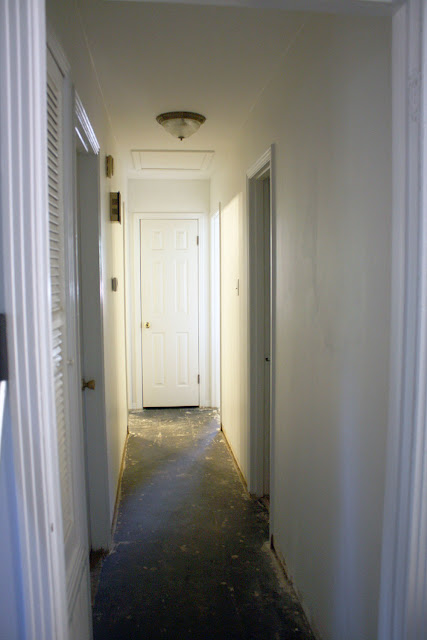 The same white was used in the kitchen. 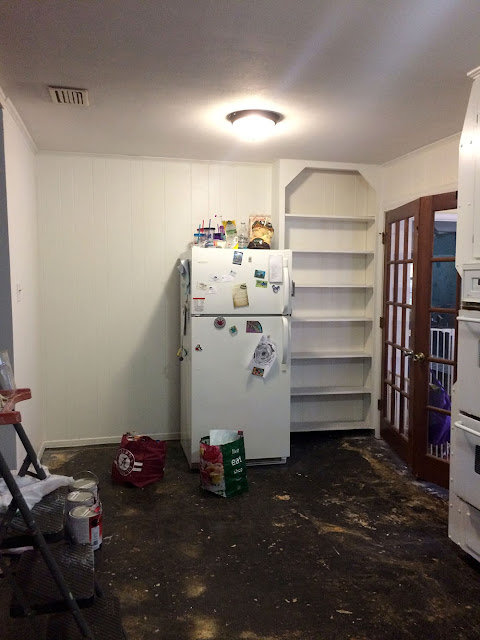 From there, we had to tackle those dark brown cabinets. I started by removing all the doors. 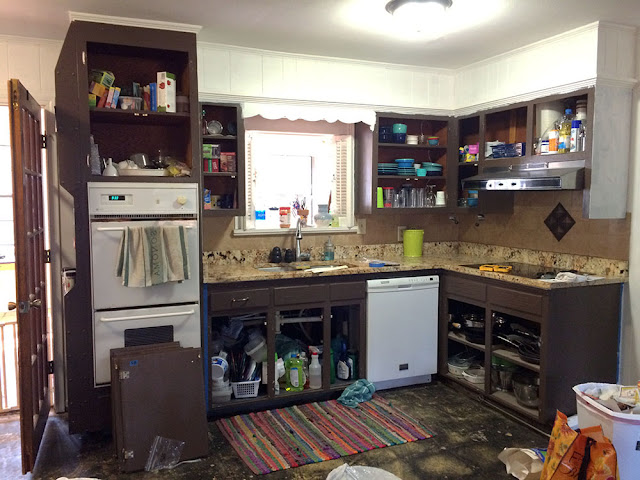 As the doors were removed, I used painter's tape and a marker to label each door so we would know which one belonged where. I also separated the upper and lower doors into different piles. 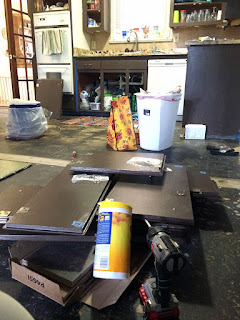 The hinges, knobs, and catches were removed from each door. I placed those pieces in separate baggies that were labeled with corresponding numbers to the labels on the doors. From there, I cleaned each door.

Then, the painting began. 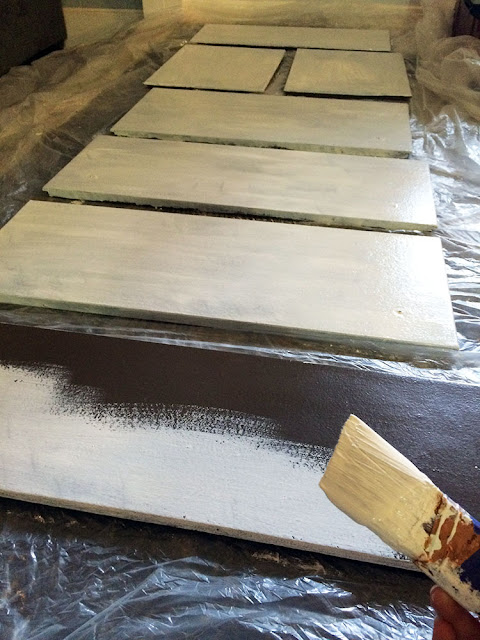 It took FOUR COATS of paint with primer to cover that brown. 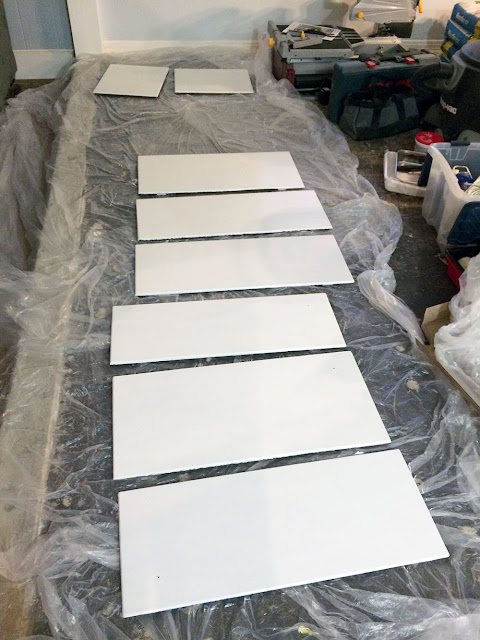 And, I had to do each side!

The hardware for the doors was a combination of copper knobs and brass hinges. I knew the mis-match would drive me crazy. 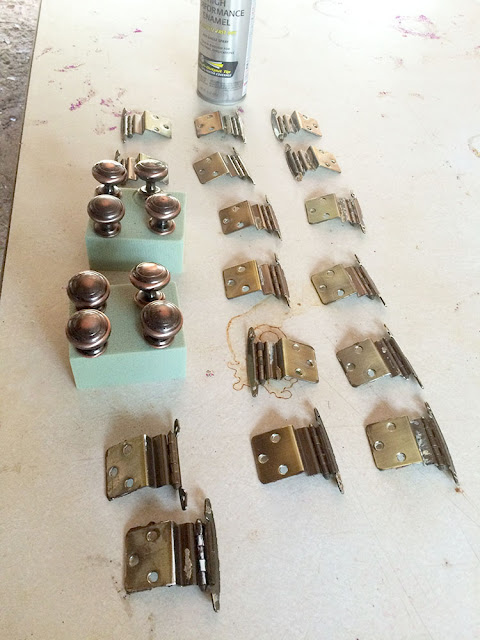 While these were removed, I took the opportunity to spray paint them a consistent color. I went with a matte black. (They're shiny in the picture because I had just sprayed them.) 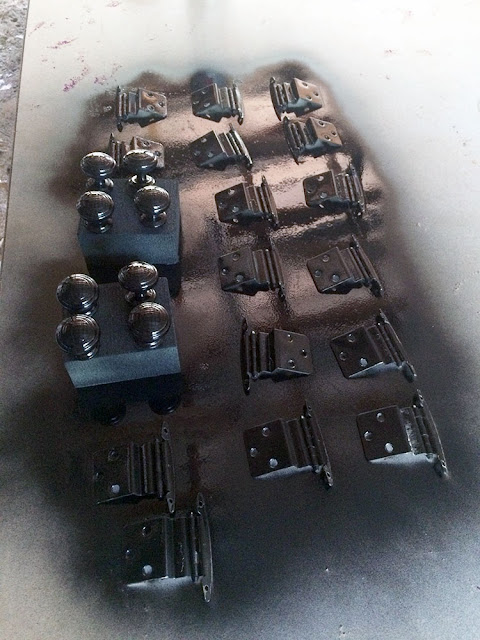 We'll eventually get or make something we like even more. This was an inexpensive fix for now.

We painted the bottom cabinets a separate color that seemed to take forever to dry. Stupid humidity! I failed to get a picture of these as we were anxious to get them done.

Once all the painting was done, we replaced the hinges and catches on the doors, rehung the doors, and screwed on the knobs. 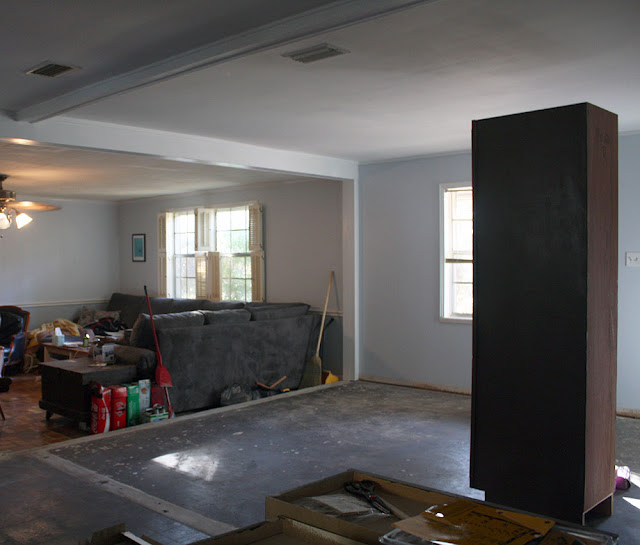 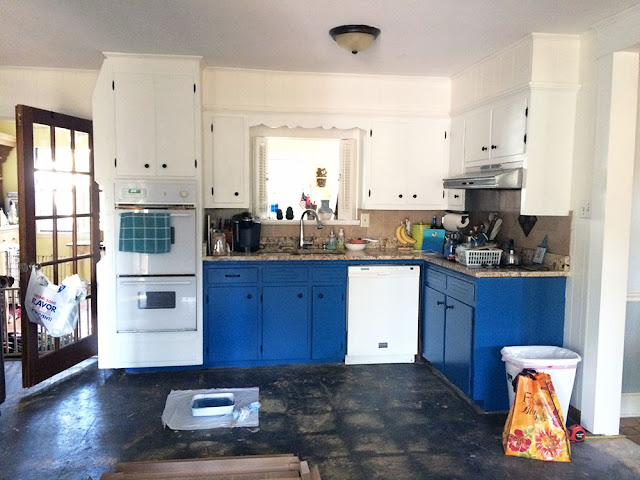 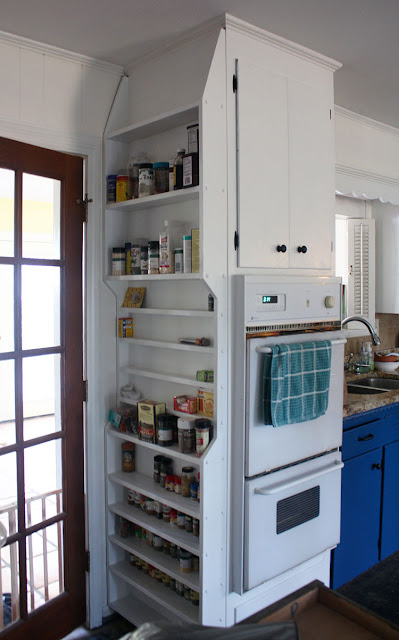 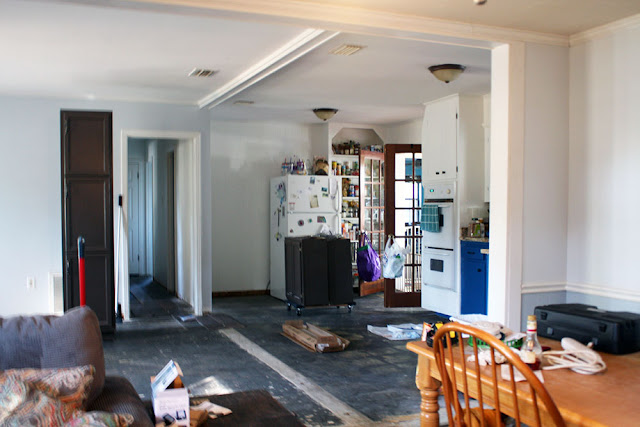 And for one final comparison. . .

Obviously, the next step is flooring. We've also removed the floor molding in order to install the floors. Those will be painted before we re-install them. That makes it a ton easier in the long run. I can't wait to get through this next step. There will still be a ton more to do, but once the floors get down, I can at least organize some and feel less like we're living in shambles.

What do you think? Better right?

I'm linking this post up at Home and Garden Thursday at A Delightsome Life.