I've been able to do a little thrifting this week and figured I might as well share!

It all started on Saturday at Southern Antiques and Accents. Every month or so they have a "Dollar Day" where booths have items marked for only a buck. I love this kind of sale because most likely the items at this price are likely to be small things that I can include in my jewelry and art. While I only spent $5 this month, I came away with some real treasures. 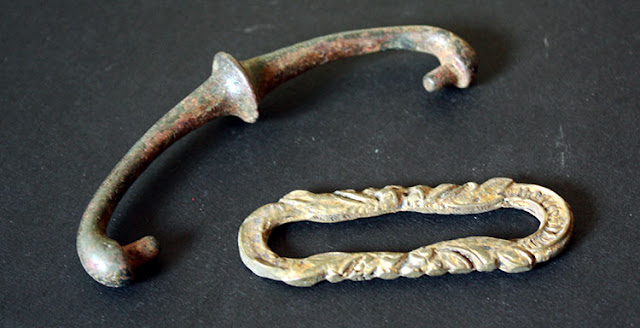 My first finds were these metal hardware pieces. I already have a couple of the rings from the last Dollar Day, but it couldn't hurt to pick up this one too. I'm not sure what I'll do with the handle. However, rest assured that I'll come up with something. 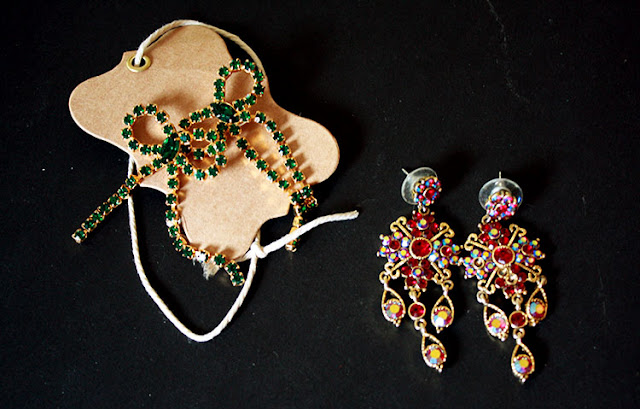 While there was plenty of jewelry marked at the sale price, I tried to stay selective and only came away with these two pairs of earrings. 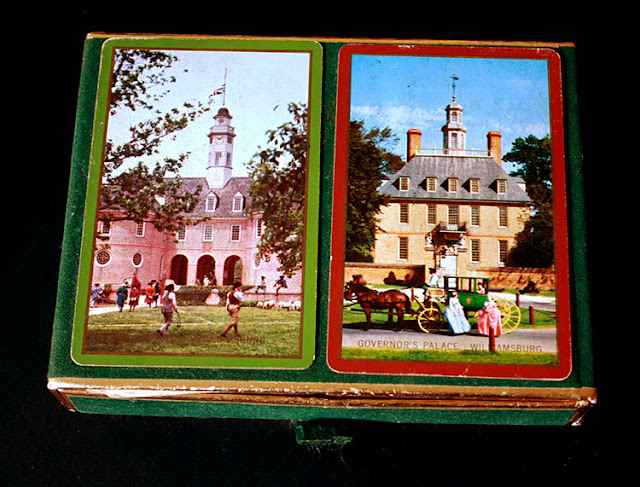 Lastly, this unassuming set of cards caught my eye. Two decks for a dollar sounded good to me. But there was more to this than I thought. 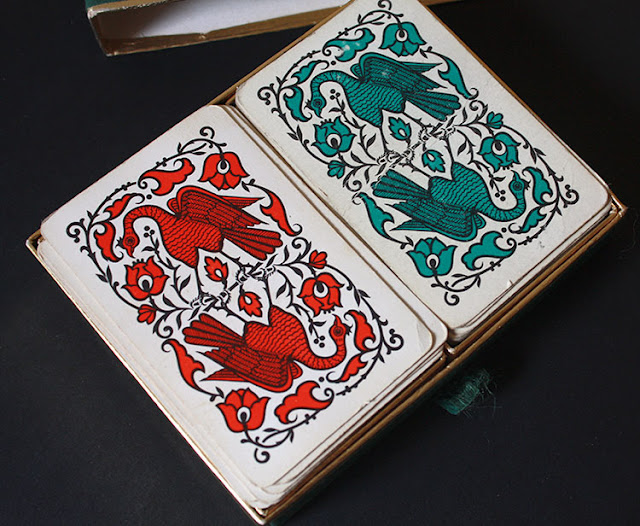 While I was expecting the cards to have the palaces from the box on the front of them, these are the cards I found inside. Interesting. 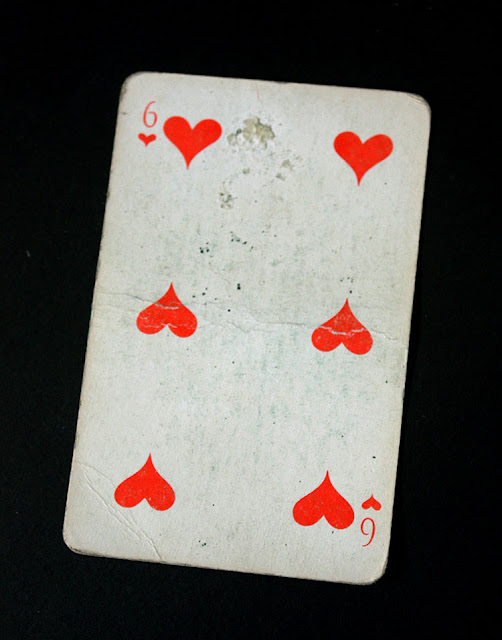 The cards themselves are a little ragged. But the face cards. . . 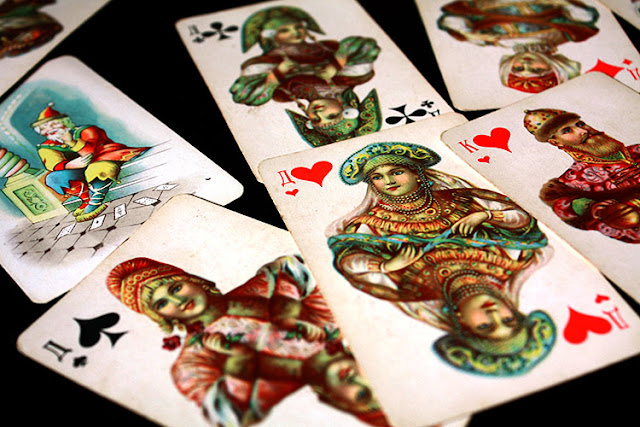 Now, these are VERY interesting.
I haven't flipped thorough both desks yet to see if there's anything else peculiar about them, but I'm happy with this Dollar Day purchase for sure. 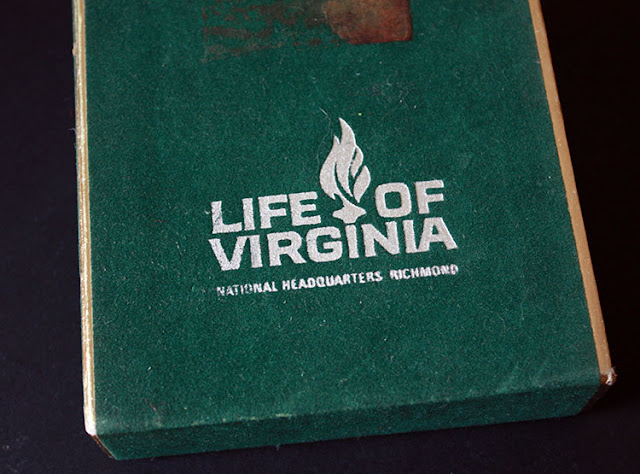 This is the marking on the back of the deck. Searches so far haven't yielded any information about them though. Let me know if you have some other resource.

Once Saturday's Dollar Day shopping was complete, I thought I was good for the week. But, the thrifting bug bit again on Tuesday. So, out I headed. 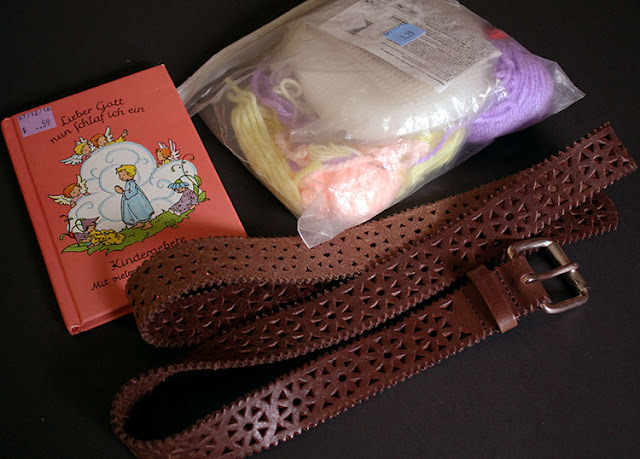 My first stop was a large, local charity shop. There, I found a belt that might be fun to make a bracelet or two out of, a German (I think) children's book, and a baggie of yarn and some plastic canvas. I'll use the canvas as a stencil/texture in my art. 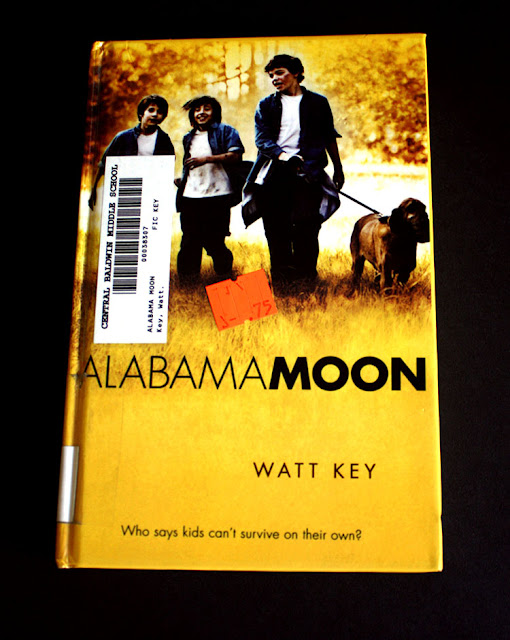 Next was the Salvation Army. I haven't had much luck there lately, but did happen upon this book. I've been wanting to read Alabama Moon for a while - even before I knew it was written by a local guy that my husband kinda knows. For 75 cents, I couldn't walk away without it. 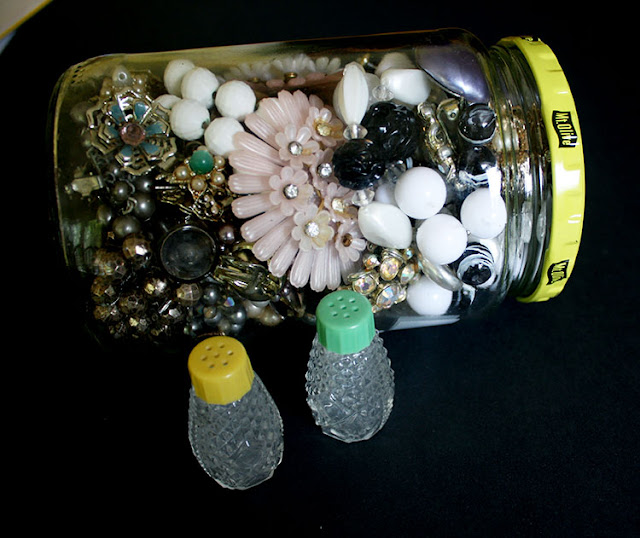 After that, I hit up one of my favorite antique malls. In the same booth, I found both these tiny shakers and the jar of jewelry. Obviously they came home with me. 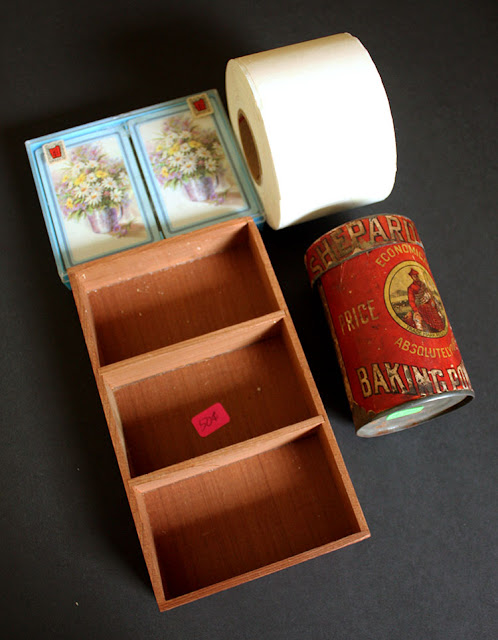 Finally, I hit up a thrift store I'd only been in one other time. I thought I was going to leave with nothing, but finally stumbled across these goodies: another deck of cards, a roll of rectangular stickers, a tiny shelf, and an old baking powder tin. I don't quite know what I'll do with the last two, but I'll work it out.

While I was in said shop, these . . .oddities caught my eye. 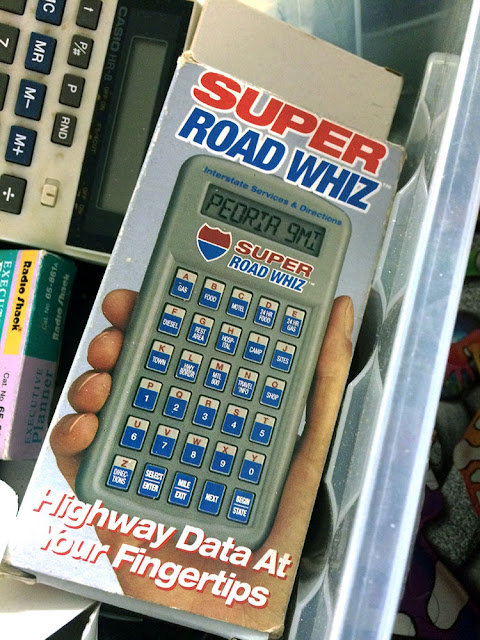 First up was this Super Road Whiz. I guess this is what people used after maps and before GPS-es. Weird. . . 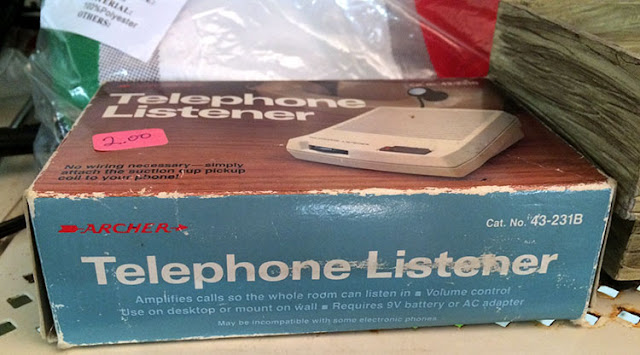 Just the words Telephone Listener caught my attention. From what I can tell, it was just a speaker phone. Perhaps this was before they had the term "speaker phone". However, I can't believe that 'telephone listener' was the best name they could come up with for this device.

Finally, this baby caught my eye. 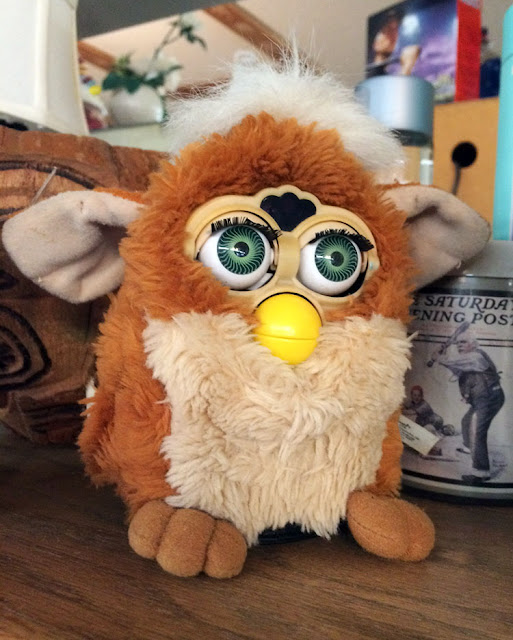 I had a Furby back in the day, and we have no idea what happened to her. Her name was Tallulah. At least that's what she told us it was as she repeated it over and over in the creepiest, slow, cutesy robotic voice ever, "Taaaaa-loooooooo-laaaaa." Like I said though, we're still not sure where she is, but we're positive she's plotting world domination. I had to bring this photo home to Pat, just to freak him out some.

Anyway, that's been my thrifting experience of late. Have you found anything worth bringing home or an oddity that bewildered you?