Well. . .farm girl is a little bit of a stretch, but some things have changed. 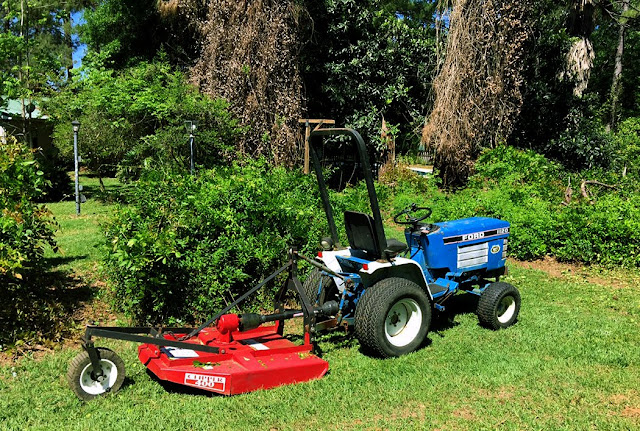 It's a pretty, blue Ford that Pat found on Craigslist. It came with the red thing attached to the back. That's called a bush hog. We have a BUSH HOG! (WHAT!?) It's basically a lawnmower attachment to take down large brush. I recently learned that, thought I'd share.

Another thing that's changed is my desire to work in the yard. Pat and I have both discovered this change in ourselves. I guess that's a good thing since there's now five acres of yard to deal with. At the other house, we neglected the yardwork as much as we could get away with. However, I now find myself outside almost daily pulling weeds. In fact, I spent a large portion of this past weekend hunting air potato (an insanely invasive weed) sprouts to try and stop them as much as I can. And, I wasn't bothered at all that I was out in the dirt sweating away, hunting weeds. What is wrong with me?

Of course, the prospect being able to cool off in the pool after getting so hot could have something to do with it. 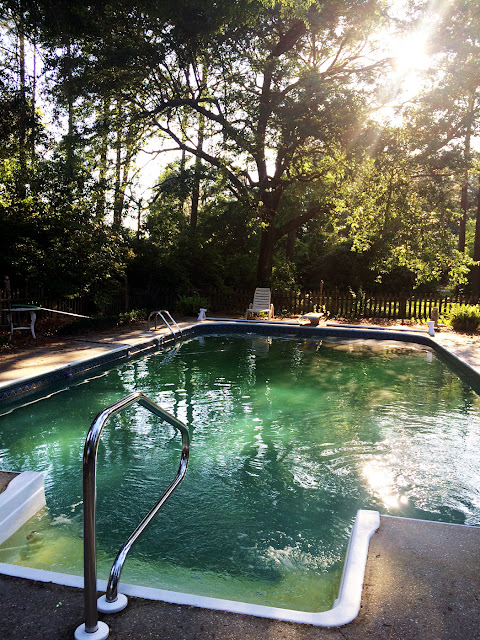 Right now the pool is a bit chilly - unless you've worked yourself into a sweat in the yard. Then it's almost nice. . . for a few minutes.

And now, Pat and I are talking about getting chickens. We've toyed with the idea ever since we decided we wanted to get some property. However, I think it's getting serious now, and I've got so much nervous excitement about the prospect.

See. . .I'm getting to be a farm girl. A weed-pulling, pool-floating, chicken-talking farm girl. And, I couldn't be happier!

Do you have chickens? I need tips, pros and cons, and lots of info. Share away!!