Let's just forget that New Year's began on January 1st.
I'm going with February 1st as my 'new beginning' or whatever.

2009 was fraught with tasks that NEEDED to be done, and To Do lists after To Do lists, and a completely full calendar. This all bled into 2010 and up to the 23rd of the month. That's when our society held our Mardi Gras Ball. It was fabulous and everything we had planned, dreamed, and imagined for the past 7 or so years. My mom (the leader/president/"queen") was breath-taking as leader and her best friend (the emblem/ball chairman) was more graceful than I knew she could be. I (ball co-chair) got to play the part of the 'fun one' and I had a BLAST. There were TONS of compliments going around. If anything went wrong or was taken poorly, I don't know about it. I'd rather not either. It was a success as far as I'm concerned.

The only pictures I have right now are some of my friends' from Facebook. (Note: I was too busy to take any pictures of my own and am 'stealing' them from my friends' albums.) If you want to see more go to my Facebook page and check out pictures of me there. Here are a few to give you a general idea 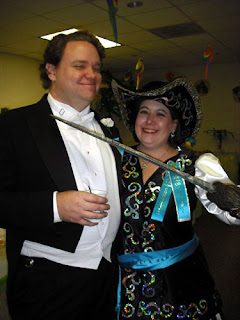 LOML and me in my 'cruise pirate pose' 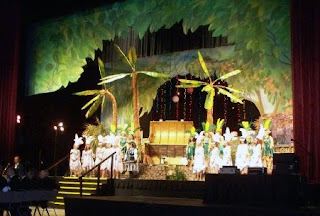 A view of the stage 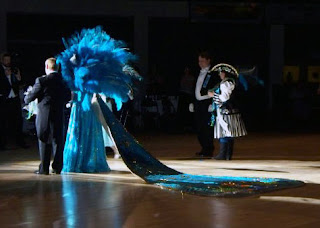 Oh! See the skirt of my costume? It's a FUNNY skirt. It was made from the curtains that were in my sister's room when we were in high school. I knew they would be perfect for the pirate-look, and I wanted something of her's with me for the ball. What's funny about the whole situation is that the seamstress made the hem of it by just leaving the part where the curtain rod slips on. If you've ever see the Carol Burnett skit where she dresses up as Scarlett O'Hara (from Gone with the Wind) and wears the entire curtain (rod and all) down the stairs, you'll understand why we thought my skirt was so funny!!

Wait! Here's the video for reference-

Now that it's all done and over, I'm ready to get back on track - cleaning house, blogging, crafting, exercising, healthy eating. Or at least make an attempt at these things. We'll see how it goes now that my excuse (the ball) is gone. Wish me luck!!
Labels: goals LOML Mardi Gras movies
CraftyHope
I’m a jewelry-artist, treasure hunter, & nature-lover that finds joy in the smallest things. I hope to spread that joy and inspiration.