A month or more ago I got an intriguing e-mail from Christine of One Kiss Creations asking if I would be interested in participating in a 'rolling hop' using some unconventional items she found while out antiquing. Obviously, I couldn't resist a challenge like that and replied instantly with a resounding YES! I revealed my rolling hop challenge items (along with all the other goodies Christine included for me) almost a month ago. 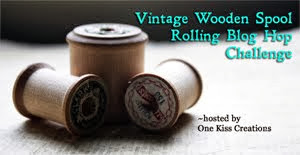 The deadline for this hop was very loose; reveal your creation(s) sometime between the end of October and the end of November. Thus, it's a ROLLING hop. As well, Christine only asked that we use at least one of the vintage wooden spools she sent us. At first I was determined to use all three, but after finishing off the first two ideas I ran out of steam. Anyway, here's what I created with them. (I really love what I made so I may go overboard with the pictures, fair warning. Also, clicking on the pictures will zoom in on them.)

With both of the spools I used, I felt the need to alter the empty portion where the thread used to be. And, in both cases I used paper to do so. In the first, it was some delicate, yellowed, French text from a book.

For the rest of the necklace I wanted to stay simple and play off the sewing theme, so I pulled a little from my abundance of buttons. Sticking to vintage mother of pearl buttons, I stacked them above and below the spool, created a chain, and dangled one from the spool.

I also finished off the chain with some small wood beads and a dainty, vintage-looking brass clasp.

Weirdly enough, before Christine ever mentioned a challenge or told me what the challenge materials would be, I had already sketched out a spool necklace design. Though what I ended up with isn't exactly what I drew, it's really close! My sketch used wire instead of the chain, but this worked wonderfully. And, I may still use wire idea eventually with the other spool. 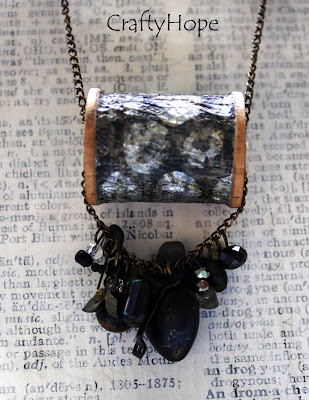 Again, I altered some paper for the center piece. This time it was some dictionary text, though you can't really see it for all the altering I did to the paper. I think the technique worked wonderfully and I'll share the process I used later. For now, it's all about these spools. 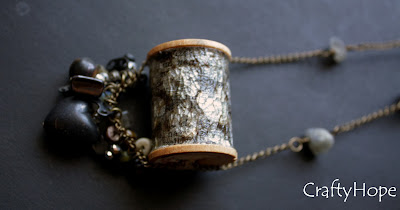 I finished the necklace off simply with more chain and a few wire-wrapped beads.

The dangles are just a random collection of beads, charms, and found objects that I thought went well with the tarnished/sparkly feel of the paper. 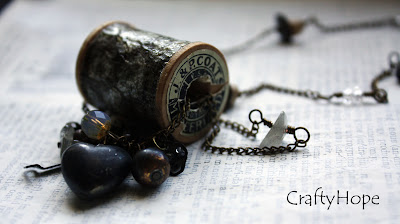 I've already worn this necklace out and am really in love with it.

Now, I still have that one spool from Christine left and plan on using it at some point for sure, but I didn't want to try to force inspiration. Instead, I'll just let inspiration find me.

Here are links to the twelve other participants in this rolling hop.

Janet
Cynthia
Kim
Therese
Tanya
Bobbie
Liz
Maryanne
Karin
Lisa
Erin
Christine
Right now, Janet and I are the only ones who have revealed. You can also just keep an eye on Christine's blog to find out when they roll out the reveal of their creations. Janet from Honey from the Bee was the first to reveal on her blog. You can also check out what Christine had to say about Janet's reveal.

Thanks to Christine for the awesome challenge and thanks to you for stopping by!

What would you do with wooden spools?