While I've still been hesitant to go into the craft room (it seriously needs some cleaning and organizing before I can really feel comfortable being creative in there), I've let my creativity spread to the kitchen.

The last few days I've done some serious recipe experimenting. And I'm proud to report that we've survived. I am a pretty strict recipe-follower, but there are those recipes that just plain fail for me. These have NOT!

First, on Tuesday I knew I wanted to make something different and new. I remember that I had received an intriguing daily recipe from My Recipes. I brought it up to LOML and he agreed. Looking over the recipe, I realized had everything but the pork chops for the Honey and Spice Glazed Pork Chops. That was easily and inexpensively remedied. And the results were out of this world good. I paired the sweet and savory chops with some broccoli, a sweet potato, and some fresh bread. SO GOOD!! 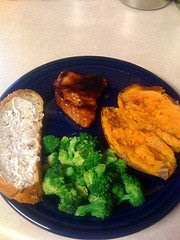 This afternoon I got a craving for some granola so I pulled out my trusty granola recipe and set to work. LOML and I could barely let it cool before we were trying to devour the whole sheet. I was able to save a bit and am looking forward to having some for a snack tomorrow too!!

Several weeks ago, LOML pointed out a recipe he thought looked good and I bought most of the ingredients. But, with all the other stuff that's had my attention, it's not been a priority. Today he mentioned it again. So I made him some Cranberry Almond Chicken Salad for dinner. It was not near as nummy as the pork chops, but still very delectible and worth the time it takes to chop some of the ingredients. I did have a hard time finding the greek seasonings specified, but found a recipe to make that too. I don't think it was completely necessary as I misread the recipe and only put 1tsp instead of the 1Tbs. I did made some, and the extra spices I had to buy made it a bit more costly. I do recommend it though!

Let's get a few "Thrifty Thursday" links out here. And hey, there are all 'food' related too!!
Now, I'm gonna sit back and enjoy my 'dessert' of Rogue Mocha Porter before calling it a night.
at July 23, 2009
Email ThisBlogThis!Share to TwitterShare to FacebookShare to Pinterest
Labels: LOML, recipes, thrifty, Thursday