The timing of this post may be considered a little off. But, I feel that it's important to share what a gem Florida is even as the residents there begin to pick up their lives and try to put it back together.

Last week we took the first away-from-home vacation since we moved to Silverlox. We've been planning it with friends for about a year, and talking about doing it for even longer. 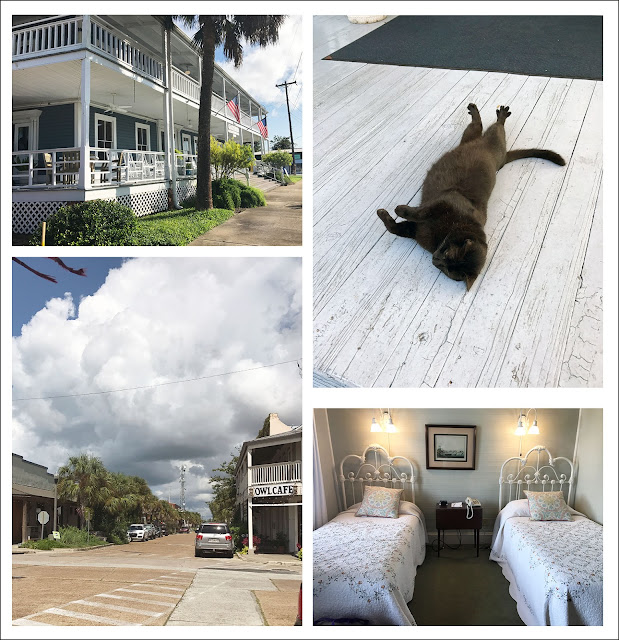 Our vacation began with a night in "Oyster City", better known as Apalachicola. We checked into the quaint Gibson Inn, met the lobby cat (Salem), dropped off the luggage, and meandered over to the Owl Cafe Tap Room to watch the Alabama vs. Florida State game. (Roll Tide!) Don't worry about the picture of the twin beds, they do have larger beds/rooms. We just reserved our room a tad late. I wanted to show how cute the decorations are. The next morning, a few of us explored downtown Apalachicola before heading over to Indian Pass to the rental house. 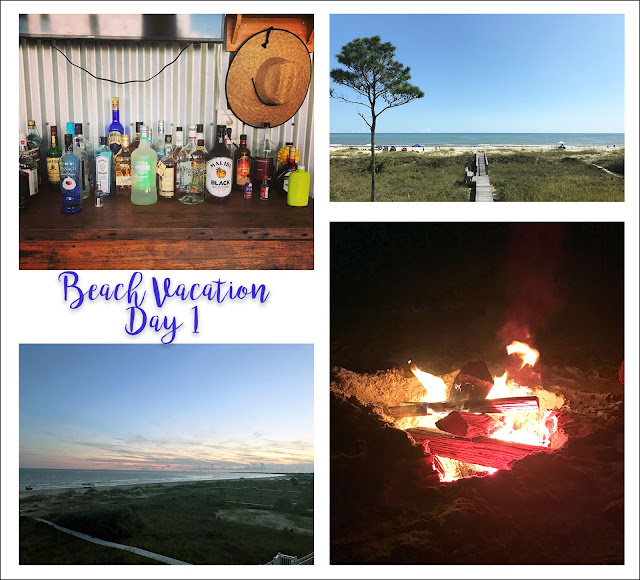 From there, the real vacation began as we set up the bar. The liquor pictured wasn't all of it, and there was a mini fridge overflowing with beers. Yeah, we had a big time. The gulf front view was spectacular, and getting to have a fire on the beach was so awesome. 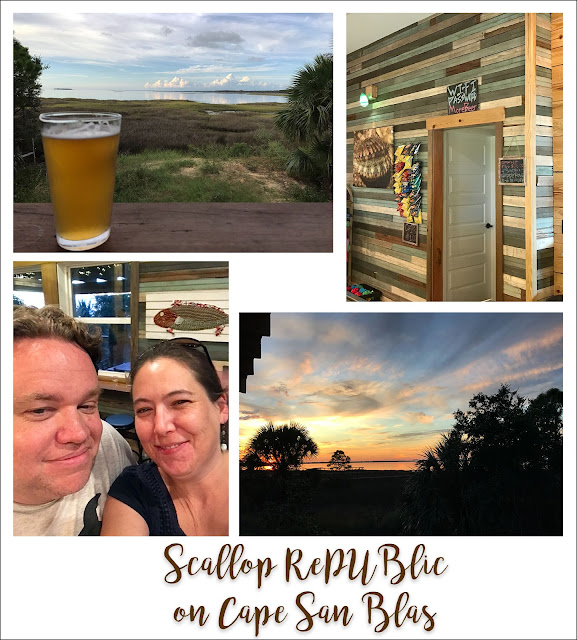 Exploring the area was a real treat. After dinner at one of the local restaurants, we hit up the Scallop RePUBlic, a local bar that prides itself on environmental responsibility. From the construction and decoration of the place to the beer and wine selection, it was focused on recycling and upcycling. And, the beer selection was fantastic. It was my kind of place! The fish picture on the wall behind Pat and me was made out of beer bottle tops. So cool! Oh, and it was an awesome sunset spot to boot.

The vacation had been planned to coincide with scallop season in Port St. Joe. As such, we rented a pontoon boat for one day to partake in the scalloping. However, due to algae bloom in St. Joseph Bay, scallop season had been suspended. We still took the opportunity to take the boat out for the day. 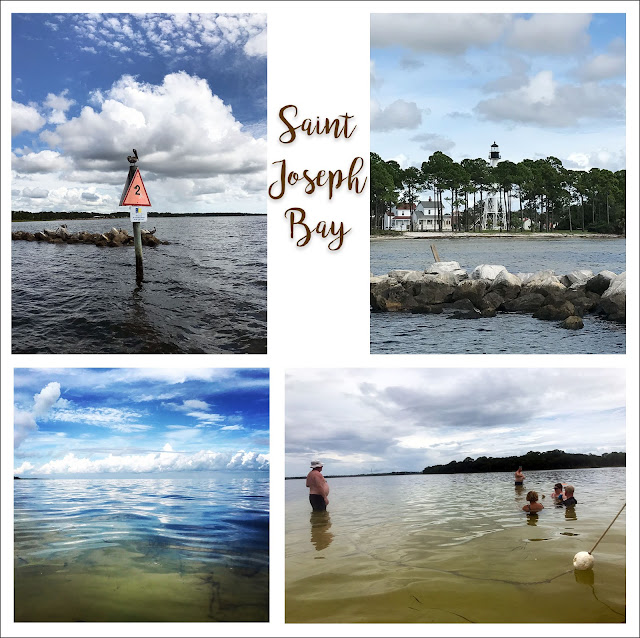 It started out overcast and rainy. In fact, it was downright scary as storm clouds were off in the distance, we could see lightning, and some of us had hair standing up from static electricity in the air. While I was in panic-mode, everyone else kept their cool and the storms blew right by us. We threw out the anchor on a sandbar and enjoyed the rest of the day snorkeling, playing frisbee, having drinks, eating our picnic lunch, and just floating in the water. We saw loads of fish, dolphins, hermit crabs, and even a shark. 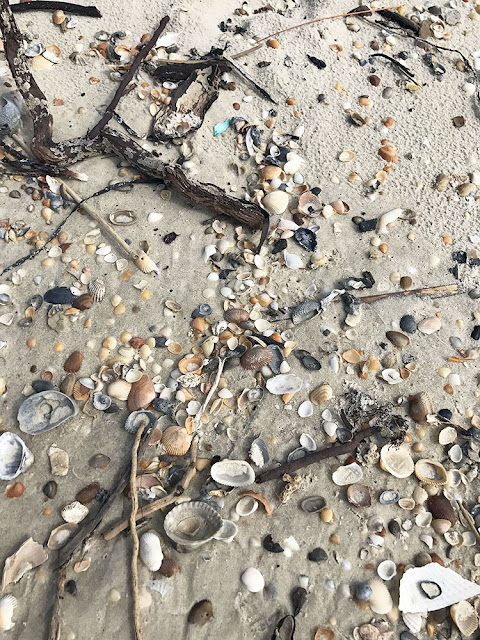 I spent much of the rest of the week walking up and down the shoreline collecting shells and driftwood. 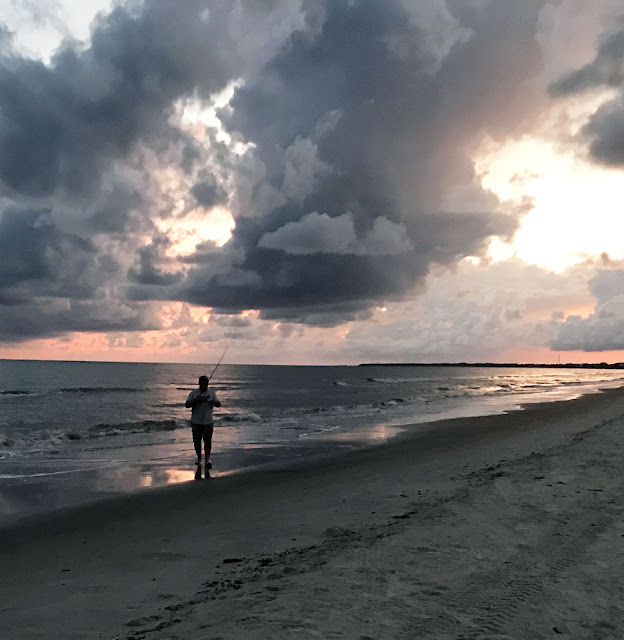 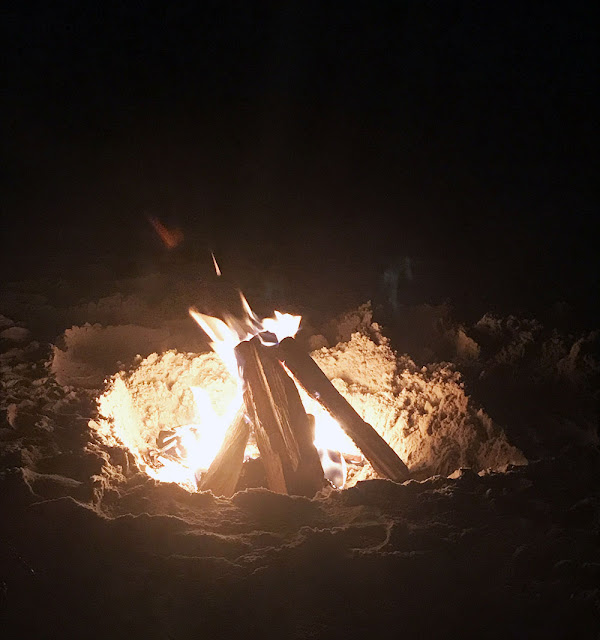 We had another fire. 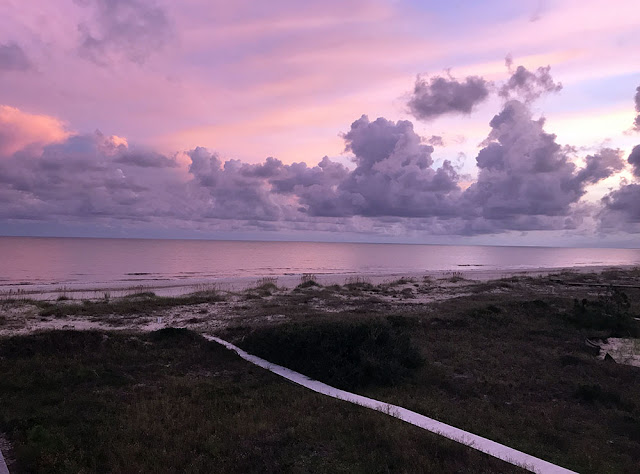 And the sunsets were breathtaking. 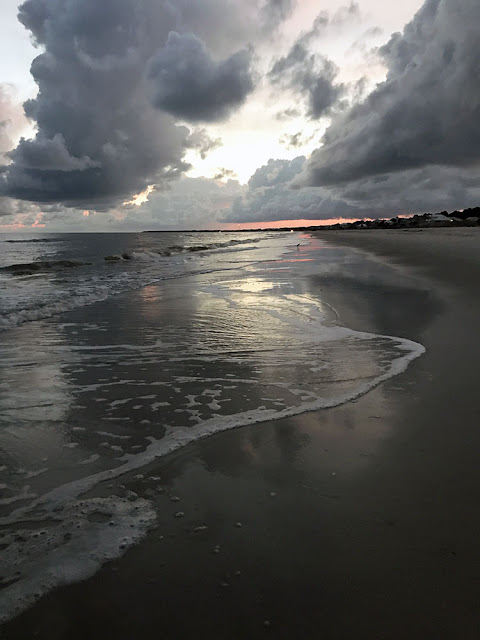 While the house we rented was fat with amenities including a fabulous outdoor kitchen, we did eat out a few times too. The food at Triple Tails was awesome. I highly recommend the cheese grits! Indian Pass Raw Bar was a real pleasure from the food to the atmosphere to the quirky honor system. We absolutely enjoyed it! In downtown Port St. Joe is Pepper's Mexican Grill. It's apparently a chain, but the food was great and the service excellent. We ate very well the whole trip. I should have spent more time walking the beach!

It was an amazing vacation on the Florida Gulf Coast. Of course, as our vacation progressed, we began to recognize the real threat that Hurricane Irma was posing to Florida. We left as scheduled on Friday morning, well before Irma began to batter the state. Two of our friends were heading back to Jacksonville, FL and bought supplies before heading home. We even made sure to fill up our own gas tank and buy a case of water before leaving...just in case. We've all ended up very lucky.

As the storm is now subsiding and homes and lives are left in disarray, I wanted to share these images of the beauty of just one area of Florida and ask you to keep all those affected by Irma in your thoughts and prayers. If you have the means, please try to help out the victims of Harvey or Irma in some way. There are loads of lists of charitable organizations looking for donations and volunteers. 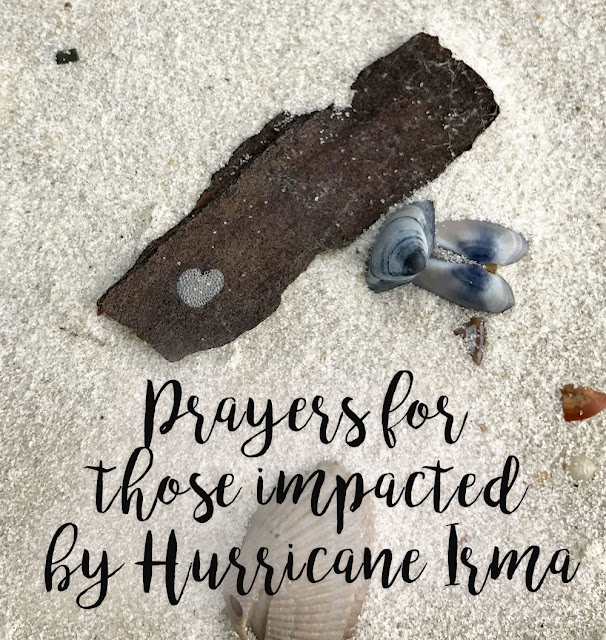 We were fortunate to get that time on the coast. Our world is changing constantly, and we must always remember to take some time to soak in the joy of what exists in the moment as it may not be there the next.